Editor in chief of Pravda.Ru, Inna Novikova, who is now in Minsk, shared her impressions of the meeting of the Norman Quartet dedicated to the conflict in Ukraine. 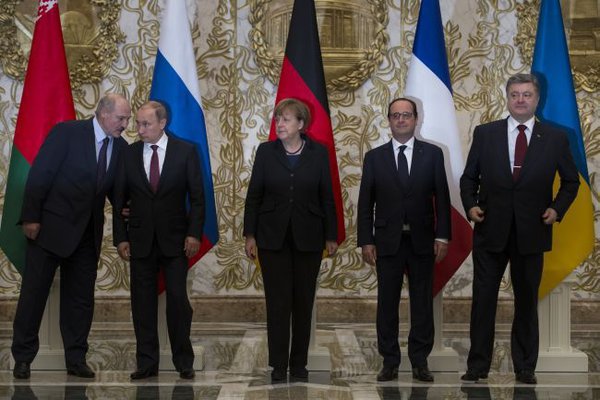 "By ten o'clock in the evening, after a 7-hour wait, the hospitable Belarusians sent all guests up to the 3rd floor and invited all to eat. This cheered the people up at once. Before that, it felt as if I was working as a taxi cab driver the whole day, waiting for clients to come. Everybody were just walking around, doing nothing. Lots of boredom and minimum of information. We were told that the presidents would come at first at 5:30 p.m., then at 7:00 p.m., then at 21:00 p.m.

"A journalist from Russian television and radio company VGTRK shouted to Poroshenko: "Why are you bombing the Donbass?" I personally missed that episode. However, afterwards, very polite employees of the Belarusian security service started walking among the journalists, telling us all in a very friendly fashion that Belarus was a peace-loving country. They asked all guests in the room to be polite and friendly to others.

"By the way, I can say that there were many French-speaking journalists around us. Is it because of Hollande? Probably, there were Germans too, but local journalists told us that the last of the previous German leaders, who had paid a visit to Belarus, was Hitler.

"Merkel and Hollande came out together. We wondered, whether they arrived on one and the same plane. They did not hug Lukashenko as he was welcoming them to his presidential palace. Firstly, they have never met before in person. Secondly, they have come to visit the "dictator," whose country that he rules for many years lives under sanctions. I hope that they appreciated the beauty of the Palace of Independence, in which the meeting was held.

"When we were told that President of the Russian Federation Vladimir Putin was to arrive in about five minutes, the 450-strong crowd of tough journalists stopped talking, and tense silence hung in the air for a moment. I do not know why. Then they started buzzing again.

"When it was solemnly announced that the presidents would come out for a photo shoot, the journalistic brethren started moving their cameras and elbows in all directions for about 15 minutes until they realized that the presidents were not going to come out to them to make history. The presidents went for the meeting at once. They came out for a photo shoot in about 1.5 hours, when all journalists were kind and friendly as they had eaten, thanks to the hospitable Belarusians.

"It turned out that I had absolutely no experience in taking pictures of the presidents who were running me by. I took a few pictures of them, as they were walking up the stairs on the second floor. I could notice that Poroshenko was very lost and sad, all gray and with baggy eyes. Hollande looked as if he was painted brown all over. He was powdery and very stately. Merkel looked like a business lady, quite ok. Putin was calm and confident. He does produce an impression, he makes you think of his power. I think Obama would be blown away, if he were near.

"Surprisingly, the journalists in the room were all like good neighbors. All were quiet. Conversations were all quite and constructive, even between Russian and Ukrainian colleagues. This made me recollect the international media forum in Minsk in June last year, when two Ukrainian women journalists managed to fight with all delegations, including the ones from Kyrgyzstan and Turkmenistan. This time, I think, everyone is expecting something constructive. Everyone is tired. Winter, cold, war, ATO. Seems like enough.

"Before our trip to Minsk, I had heard that it might be the last conference, after which, it's either war or peace. All journalists were so hopeful of peace in what they were saying and writing.

"I was told here that this meeting is much more important that the one known as the Yalta Conference that took place in 1945. I think one should lock up these world leaders here in the beautiful palace in Minsk, until they make a decision that everyone would be happy to learn about."

According to most recent information, Putin, Hollande, Poroshenko and Merkel have coordinated the peace plan as a result of the meeting in Minsk. The document stipulates that the sides of the conflict may agree to cease fire from February 14. Other agreements stipulate for the withdrawal of heavy artillery, the creation of the demilitarized zone and the pullout of foreign troops. It is assumed that in 2015, Ukraine will control the border with Russia.

It was said that the document consisted of 12-13 paragraphs.

UPDATE: It has been said that the leaders of the two breakaway republics will sign the document coordinated by the Norman Quartet

BREAKING NEWS UPDATE: Russian President Vladimir Putin said that all parties that took part in the meeting in Minsk agreed to a ceasefire starting February 15.

Long-term political regulation in the Donbass in particular stipulates a constitutional reform in Ukraine, which would take account of legal rights of Donbass residents, Putin said.

It was also reported that Germany and France would provide for the technical assistance in restoring the banking system in the war-affected regions, Pravda.Ru reports.

French President Francois Hollande said that the Norman Quartet agreed on a global solution on ceasefire and political regulation of the crisis in Ukraine.

Read the original in Russian on the Russian version of Pravda.Ru