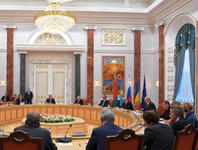 As expected, the meeting in Minsk between the presidents of Russia and Ukraine within the scope of the Customs Union-EU-Ukraine summit ended without any breakthrough results. Vladimir Putin emphatically stated that the regulation of the crisis in Ukraine was not Russia's business, but an internal problem of Ukraine. The talks between the two leaders lasted for about two hours. The Russian president described them as "positive," whereas his Ukrainian counterpart called them "very complicated and difficult."

Speaking of the armed conflict in Ukraine, Putin said that "Russia, for its part, will do everything for the peace process, if it begins. This process should be started as soon as possible", he said, adding that the sides agreed to resume the work of the contact group on the peaceful settlement. Putin also announced the achievement of "certain agreements" with Kiev on the delivery of humanitarian aid to the conflict zone.

Vladimir Putin stated that Russia could not negotiate the conditions of cease-fire in Luhansk and Donetsk regions with Ukraine. According to him, Russia can only "contribute to the establishment of the environment of trust" between the participants of internal Ukrainian negotiations, as this is an internal matter of Ukraine.

At the general meeting with the participation of the presidents of Ukraine, Belarus, Kazakhstan and representatives of the EU, Putin spoke more about economy, rather than politics. In essence, Poroshenko's appeal to consider his peace plan was left without a response, although the Ukrainian leader said that the logic of the plan "was finally supported by all leaders, without exception." However, the plan was not discussed at the talks.

Some experts believe that the meeting in Minsk showed that Putin does not consider Poroshenko an equal partner for solving issues of war and peace, as this is a subject for negotiations between Moscow and Washington. The military and political situation in the Donbass was not discussed in Minsk in the absence of representatives of the United States. At the same time, it is highly likely that the administration of Barack Obama is not ready for direct US-Russian negotiations on this topic.

Journalists paid attention to the emotions of the Russian and Ukrainian leaders displayed at the meeting in Minsk. Putin, welcoming the colleagues, was smiling and looked relaxed, while Poroshenko, on the contrary, looked as black as thunder cloud.

Putin's speech at the general meeting was mainly devoted to cooperation between the EU, Ukraine and the Customs Union, given Kiev's Agreement on the European integration. Poroshenko was convincing other participants of the meeting that the free trade of Ukraine and the EU did not pose a threat to other members of the Customs union. Putin, on the contrary, was promoting a different point of view. He evaluated Russia's possible losses from new rules of trade between Kiev and Brussels at 100 billion rubles, explaining that less competitive Ukrainian products would be pushed from the market primarily to Russia and other countries of the Customs Union. "Russia in this situation, of course, can not stand still," he said.

As for the war in eastern Ukraine, Putin only said that the situation "can not be resolved by further escalation of the military scenario ignoring the interests of residents of south-eastern regions, without a peace dialogue with their representatives."

Putin commented the news of the detention of ten Russian military men on the territory of Ukraine. He told reporters that he had not received a report on this from the Ministry of Defense, but noted that, the soldiers were patrolling the border and could find themselves on the Ukrainian territory incidentally indeed, similarly to how Ukraine servicemen had previously crossed the Russian border. Ukrainian servicemen "came" to the Russian territory before, even on armored vehicles, Putin said. "There were no problems about it. I hope that in this case they (problems) will not arise either," said Putin.

In general, one shall assume that no one was expecting breakthrough results from the meeting between Putin and Poroshenko. In became clear from Putin's interview that the leaders discussed the whole range of issues of mutual relations, but found no obvious points of contact.

It was the first meeting between the presidents of Russia and Ukraine in the bilateral format. In early July, in Normandy, they talked in the presence of colleagues from France and Germany, only for 15 minutes, and spoke several times on the telephone before the summit in Minsk.

After the talks with Putin, at about midnight MSK, Poroshenko went to the Ukrainian Embassy in Minsk, where he had another meeting scheduled - with EU foreign policy chief Catherine Ashton. The presidents of Russia, Belarus and Kazakhstan continued communication in the trilateral format after Poroshenko left, discussing the development of the Customs Union.

Later, Poroshenko announced that the talks on energy issues with the participation of ministers for fuel and energy of Ukraine, Russia and the EU would take place on September 6. On August 30, in Brussels, Ukraine will inform EU leaders on further action to implement the Agreement, Poroshenko said.

Putin confirmed that Russia and Ukraine agreed to resume talks on energy and gas issues. "We have many specific issues. Russia, Ukraine and our European partners are interested in solving these issues," Putin said.