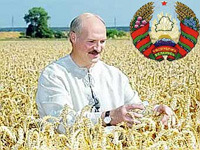 Belarus has elected the new old president. Alexander Lukashenko, the sitting head of state ran away with the election. The announcement of the results of the vote was marred with massive riots in the center of Minsk.

The chairwoman of the Central Election Committee Lidia Yermoshina said that that the turnout at the election exceeded the level of 90 percent. About 20 percent of the population took part in early voting. The election did not produce any sensation at all: Alexander Lukashenko was reelected for the fourth time in a row. He received nearly 80 percent of votes.

Opposition candidates stated that the voting results had been fabricated. They blocked the central street in Minsk (Independence Avenue) and headed towards governmental buildings. Special police units arrived at the same location as well. Some opposition activists tried to storm the building of the government, broke several windows, which made the police took decisive measures in return.

Russia Today: Reign of Europe's last dictator not about to end in 16 years

The riot police used batons and tear gas against the protesters. Up to 500 people were arrested. Several people, including candidates Vladimir Neklayev and Andrey Sannikov were wounded. Both of them were arrested. Three other candidates -Grigory Kostusev, Aleksei Mikhalevich, Dmitry Uss and Vitaly Rymashevsky -were arrested as well. Only two opposition candidates - Yaroslav Romanchuk and Viktor Tereshchenko - avoided arrests and remained free.

Belarus's Minister for Internal Affairs Anatoly Kuleshov stated the next day in the morning that about 30 police officers were injured in the night riots in the city.

"The crowd was following selfish goals. It was an uncontrollable crowd that was crushing everything on its path. It was a crowd of vandals that came here being called by the candidates who used the crowd as a tool to pursue their own goals. Their goals are to destabilize the situation in the country, to disrupt peace and public security which has been strengthening during the recent 15 years. They failed to do it," the minister said in a statement.

Belarusian law-enforcement authorities instituted criminal proceedings into the riots according to Article 293 of the Penal Code of Belarus. The article stipulates up to 15 years of imprisonment.

Dmitry Rodin, an independent scientist of politics of Belarus gave an interview to Pravda.Ru about Lukashenko's victory at the elections.

"Lukashenko is known in the West as "Europe's last dictator." How will the USA and the EU treat him now?"
"Western observers - European observers, first and foremost - say that the presidential election was more liberal than before. Opposition was provided access to all mass media outlets, including television; agitation products were distributed actively. Opposition activists claim that Lukashenko used the administrative resource, but how could he not do it, if he is the president? Western observers did not report any violations during the counting of votes. The data collected as a result of independent polls are practically the same as the official data.

"As for the West, it recognizes the results of the Belarusian presidential election as legitimate and democratic. It does not look like Europe is going to take the side of the so-called rioting opposition."

"Why did Lukashenko win? They said shortly before the vote that Lukashenko would be over with without Russia's support."

"Lukashenko won because he has the support of the people, especially in the regions. The share of his supporters in Minsk is smaller, but he gained over 50 percent of votes in the capital anyway. He has such an impressive support because of the social orientation of politics run by the Belarusian authorities. For example, is there any other place on the territory of the former USSR where people can have apartments for free? Here is another example: there is not even a notion of "ethnic crimes" in Belarus because the government is conducting smart policy not to let migrants in.

"In addition, many people see Lukashenko as the national leader, who is not going to succumb to either Russian or Western pressure, but who is going to act for the interests of his country only. He is also known as the leader who can find a way out of complicated situations. For example, when Belarus was cut from oil supplies, he quickly found a way out of the problem bringing oil from Venezuela and Iran."

"Why did the opposition do that? Can they materialize their threats and continue their protests and riots?"
"They did that out of despair. They realized that they had no chances to make Lukashenko go. They knew that they would not win in a democratic way, they knew that they would lose the vote. Opposition leaders could not even unite against Lukashenko. The events that happened in Minsk showed that there are approximately 12,000 dissatisfied people in the whole country. However, nearly a third of them dared to storm the building of the government."