Holland obediently tightens the belt for Greece and EU

Parliamentary elections have taken place in the Netherlands this week. The main outcome of the elections was the victory of the parties that advocated the strengthening of the European integration and declared their readiness (to a certain extent, at least) to tighten the belt, save the EU and the crisis-stricken Greece. But the far-right Freedom Party has failed. 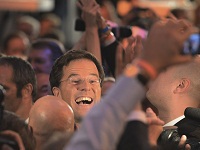 The voting in the Netherlands on September 12 took place ahead of schedule. In April, the government led by the leader of the liberal People's Party for Freedom and Democracy, Mark Rutte, stepped down. It failed to push its plan through the States General (the parliament). The plan stipulated the reduction of costs by 14-16 billion euros a year to keep the budget deficit within the limit of 3 percent. As a result, Rutte lost the support of the parliamentary majority, and new elections were called.

Holland is an island of relative stability in Europe. The crisis has certainly affected the country, but it did not strike it much. The Netherlands remains one of the few EU countries, whose credit rating has never been downgraded. Still, the prices are growing, and the Dutch had to face the need to share with the poorer members of the EU - particularly with Greece. Therefore, the subject of assistance to EU countries and the associated reduction in government spending in the Netherlands has become the central issue in the current election campaign.

The People's Party for Freedom and Democracy approached the day of the voting as an election hopeful. Its program was based on the same need for austerity measures. In foreign policy, Rutte is guided by German Chancellor Angela Merkel, who demands strict financial discipline for the countries of southern Europe and Ireland that found themselves in a difficult position. The former prime minister wants to deepen the European integration. He is ready to help Greece, but not eternally.

The center-left Labor Party headed by Diederik Samsom was the main rival of the Liberals. He also advocates the strengthening of the European Union. However, he is focused on the leftist president of France, Francois Hollande. Like the French leader, the Dutch Labor Party advocates the stimulation of demand, supports assistance to Greece and stands against sharp cuts in social spending.

The far-right Freedom Party, headed by notorious politician Geert Wilders, was the main opponent of the liberals and the center-left. His success was presumably based on anti-Muslim and anti-immigrant rhetoric. However, the economy and the need to help Greece forced Wilders to shift his focus. Instead of talking about Arabs and Turks that flooded Amsterdam and Rotterdam, he started talking about the withdrawal from the euro zone and the need to stop "dancing to the tune of Brussels." According to Wilders, the Netherlands should have the guilder back and stop the "sponsorship" of Greece. To crown it all, Geert Wilders considers the country's withdrawal from the European Union possible.

The popularity of the far-left Socialist Party - the successor to the Dutch Communists - has grown during the recent months too. Internationalist in their ideological essence, they were in many ways in agreement with Wilders - their implacable opponent. In particular, party leader Emile Roemer said that the Netherlands should stop assisting the insolvent members of the eurozone. "Stop feeding Greece," the slogan of the Socialists said. In other words, money does not go along with friendship.

As a result, the Liberals took the first place. The People's Party for Freedom and Democracy won 41 of 150 seats in the States General, having improved its results by 10 seats. The Labor Party performed well too: it received 39 seats, which was up nine seats more than two years ago. Still, a victory is a victory: the main contender for the post of the prime minister is Mark Rutte. Most likely, the Netherlands will support the course of Angela Merkel, rather than Hollande's stimulation of demand.

The defeat of the Freedom Party Perhaps became the main sensation of the vote. Wilders' supporters received only 15 seats instead of 24 in the previous Parliament. It seems that the leader of the far-right has bet on the wrong horse. The talks about the withdrawal from the European Union scared away many Dutch people, because the EU is largely their creation. The agreement on the establishment of the EU was signed in Maastricht, the Netherlands, 20 years ago, and the Netherlands played one of the main roles in it. If Wilders had continued to criticize immigrants, he would have had more chances for success. As for the Socialists, they kept their 15 seats in the parliament.

A few other parties were also included in the States-General. It is the former ruling conservative party Christian-Democratic Appeal (13 seats), Democrats-66 (12 seats), Green Left (3 seats) and 50 Plus (2 seats) that protects the interests of pensioners. Now some of them have to enter into the ruling coalition with one of the two winners.

The results of the voting in the Netherlands are contrary to the European trend of the recent years. In most cases, it is the former opposition that wins, but here we have the ruling party consolidating its position. Perhaps, this is the mentality of the Dutch. They are historically used to saving and tightening the belt, struggling against endless floods. So if there is a need to cut costs, then so they do. The majority of the Dutch do not question the necessity to strengthen the European Union. If there is a need to pay for it, then so they do.