When arrested, the woman described in detail where and how she committed every execution

Many years after WWII, the Soviet Interior Ministry and the KGB were still disclosing war crimes and exposed those criminals who assisted the Fascist army during the war. In the summer of 1978, after so many years of unsuccessful searches the KGB finally found traces of a Soviet woman who during the war executed partisans and their families by shooting by order of Fascist commanders. Within 1941-1943, Antonina Makarova worked as a machine gunner on the occupied Soviet territory. At that time the woman was just 20, too young and wishing to stay alive, so she chose to work for Nazis and carried out death sentences instead of dying when defending the motherland from enemies. 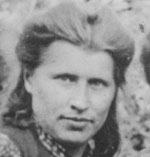 Antonina was born in a village to the Parfenovs family where later more children were born. She was the eldest child and was the first to go to school. Antonina was not a talkative girl; she felt embarrassed when a teacher asked her last name. The girl forgot her last name, and the teacher put down her last name as Makarova as the name of the girl's father was Makar. And since that time Antonina was the only member of the Parfenovs family who had the last name Makarova. After the girl left school she left for Moscow where she planned to continue studies or find some employment. But suddenly WWII broke out, and the 19-year-old girl joined volunteers going to the front. She dreamt of becoming a machine gunner. In autumn of 1941, Hitler's troops were approaching Moscow in the framework of the Typhoon operation. Over one million of Soviet young people died near Vyazma and 500,000 people were taken captives. It seemed that the deaths of the people were senseless and could not save the situation. One day Antonina found herself among heaps of dead Soviet soldiers and felt terribly scared. The girl survived but had to make a long and hard way to find Soviet troops and join them. The girl roamed about villages and asked housewives to shelter her and give some food. Usually, women let Antonina stay in their houses for several days, gave her food and allowed to wash in the bath house, but soon inevitably told her to go away. Village women did not like the girl's glance and her manner to flirt with those few men who stayed in the village. Indeed, it seemed the girl was terribly afraid of spending cold nights alone and agreed to share her bed with any man who agreed. In the settlement of Lokot Antonina came across Fascist policemen who offered her employment of a machine gunner for  good payment and gave her some lodging.

Usually Antonina Makarova was ordered to execute a group of 27 people, the number of partisans which a local prison could house. Death sentences were carried out on the edge of a pit half a kilometer from the prison. She never knew people whom she executed and they had no notion who the executioner was either. Antonina executed the first group of partisans being absolutely drunk and the girl could hardly realize what she was doing. She often kept clothes of those whom she killed if the things were good; she carefully washed them and heaped them in her room.

In the evenings after work Antonina loved to dress up and enjoy her time dancing with German officers together with other girls who came there as prostitutes. Antonina boasted she used to live in Moscow that is why other girls kept aloof from her.

At dawn, Antonina often came to the prison and peered into the faces of people whom she was to execute in the morning. The woman just did her job when executing people and believed that the war would write her crimes off. She often had to shoot families of partisans, women, elderly people and teenagers.

Antonina was lucky. In the summer of 1943 when the Soviet army began fighting for liberation of the Bryansk Region where Antonina lived and worked for the Fascist army, German officers found out that she and other prostitutes had a sexually transmitted disease and sent them to cure the disease in some remote hospital. When Soviet troops entered the settlement of Lokot and executed traitors of the motherland working for Nazis by hanging, Antonina Makarova was not among them. According to modest estimates, Soviet troops discovered remains of about 1,500 people whom Antonina had executed. Later, only about 200 people of them could be identified. The death of the people was the ground of a criminal case initiated against Antonina Makarova born in 1921 and supposedly living in Moscow before the war. There was no other information about theterrible woman.

The KGB was keeping the case of Antonina Makarova for many years in the archives and could not believe that the woman disappeared once and for all. After the war, KGB investigators found out about 250 women with the name Antonina Makarova and approximately of the age of the terrible machine gunner. The KGB could not just ignore the fact that the woman actually existed but suddenly disappeared. The crimes she committed were terrible and must be punished for. It seemed incredible that one woman killed so many people. Fortunately, some of Antonina's victims survived and told they saw the young woman every day in their dreams. These people were absolutely sure that the executioner was alive.

All searches for Antonina Makarova turned out to be a bad luck. The machine gunner managed to escape punishment because investigators did not guess to search the woman by her real last name, Parfenova, not the one – Makarova – that the teacher gave to the girl by mistake.

In 1976, KGB officials suddenly found traces of Antonina Makarova who had the last name Ginsburg after a marriage in 1945. A Moscow official named Parfenov was registering documents necessary for a trip abroad and put down the names of all close relatives in official documents necessary for getting a visa. All people of the family had the last name Parfenov but one woman was named Antonina Makarova (Ginsburg after marriage). The KGB went into details and found out that Antonina Ginsburg (maiden name Makarova) was a very respectable 55-year-old woman living in a small town in Belarus, in Lepel. In 1945, Antonina Makarova married war veteran Viktor Ginsburg whom she met in a military hospital. When the war was over Antonina together with her husband went to his native town, Lepel where they lived a happy life and gave birth to two daughters. The woman and her husband were respectable citizens of the town, war veterans enjoying all privileges usually granted to war veterans. The KGB acted rather cautiously not to mar the woman's reputation in the town in case all suspicions turn out to be mistaken. KGB officers brought several victims of the terrible machine gunner, another executioner working with her and one of Antonina's war lover to the town where the suspected woman lived to identify her. Only when all the witnesses identified Antonina Ginsburg as Antonina the Machine Gunner who executed orders of Fascist officers the KGB arrested the woman. At first, Antonina behaved as if she was arrested by mistake. Her husband was indignant at the arrest and even threatened to complain to the UN about the human rights violation. But soon Antonina confessed she had been working for Nazis during WWII and told every detail about those horrible days. Her husband turned grey overnight when he learnt the truth.

Being in a detention center, Antonina wrote no messages to her husband and daughters. The woman concealed not a single detail of her past which was particularly scary. Investigators say that it seemed as if Antonina could not realize that she actually committed anything criminal. She remembered every execution she carried out but did not regret anything. There is no excuse for Antonina's doings even if the woman says she had to kill hundreds of people to save her life. A psychical expertise revealed the woman was of sound mind. Investigators feared that the accused could commit suicide which was quite typical of people whose terrible crimes were disclosed.

During the investigation, Antonina was brought to the settlement of Lokot where she executed families of partisans. The woman described in detail where and how she committed every execution.

Antonina took the arrest as something particularly shameful for a woman of her age and reputation. She expected she would be sentenced to not more than three years of suspended sentence and planned to leave Lepel to begin a new life somewhere else.

But a court decision as concerning Antonina Ginsburg (Makarova) turned out to be an absolute surprise for investigators and for the accused herself. The court sentenced Antonina to capital sentence by shooting. The woman was executed August 11, 1978. Moscow authorities declined all appeals for pardon that Antonina had sent there.

The case of Antonina Makarova was the last significant case on traitors of the motherland during WWII and the only one which concerned a female executor. Never before that was a woman executed by shooting by court decision in the USSR.