Nikolay Panchenko was the first Soviet citizen officially registered as HIV-positive in 1987. That was so long ago that anyone could guess the man is not alive today, but in fact Nikolay is alive and has no inclination to die. At the age of 53 this HIV-positive man looks much better than other healthy people of his age. Indeed, he wears stylish clothes and smiles a lively smile of a boy. 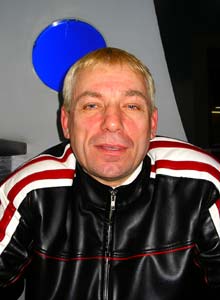 Today, Nikolay's way of living and his profession are connected with AIDS. He is the president of the Society of HIV-positive and AIDS Patients in St.Petersburg; the man is known worldwide, foreign filmmakers shoot documentaries about him. But what is particularly important, Nikolay is a living example of courage and optimism for HIV-positive people in Russia. Nikolay has made a rather good career after he was dismissed from the police when it came to light that he was gay.

- Is it difficult to serve an example for thousands of HIV-positive people?

- I experience the same problems like other public persons do: I always have to smile and be cheerful; I have no right to commit a mistake. Sometimes I feel I cannot any longer be that brave, but I know my organization will break up if I give up my work. Panchenko is the brand name that helps the organization survive. Today, there are just a few people in Russia who do not conceal they are HIV-positive.

Nikolay was born in the city of Kaliningrad where he later graduated from the department of law at the university and began working at the police. He got married at the age of 23. He says the relations with the future wife were spontaneous. They divorced in 13 years when their daughter and son grew up and the couple understood they still failed to understand each other properly. Nikolay says his ex-wife is a scandalous woman: she made complaints about him to the police chiefs and said he was gay. That was a real scandal in the 1980s in the USSR, when homosexual relations were regarded as a blatant violation of human morality, so Nikolay had to stop working as a policeman.

In 1987, Nikolay had some health problems and was taken to a hospital where blood tests showed he was HIV-positive, a really sensational and terrible diagnosis for that epoch. In Kaliningrad, Nikolay was officially registered as HIV-positive and immediately felt that people began to shun him. Then the man was sent to a Moscow hospital for three months where another four HIV-positive patients stayed. At that time Nikolay believed that such a terrible diagnosis was quite normal for some African country, not the Soviet Union, but still he took the awful diagnosis rather optimistically. First HIV-positive individuals in the USSR were basically homosexuals. As a rule they received the information about the terrible diagnosis adequately as they know AIDS is typical of gays. Doctors wanted to find out the source of the infection but it turned out that Nikolay was the only HIV-positive man in the Kaliningrad Region. He guesses that he caught the infection after a short romance with a student from South-East Asia being on a business trip to Moscow. As for himself, Nikolay is absolutely sure that he has not made at least one man HIV-positive.

- In 1987, I was sentenced to four years of imprisonment for the risk of spreading AIDS and for homosexuality. In the USSR people would be thrown into jail for homosexuality without any court hearings.

- How did other prisoners treat you when they knew about the diagnosis?

- The penitentiary administration expected that prisoners would have a lynch law on me and kill my by burning. But in the prison I stayed together with inmates  whom I managed to establish quite normal relations with. When the plans of the administration failed they put me into a solitary cell where I spent three years and seven months. That was a horrible and dirty place. Security gave me newspapers and magazines but never took them back, obviously they were afraid of catching the infection through ordinary everyday contacts. I even had to go on a hunger strike to have better conditions. My hunger strike of 17 days made the prison administration put me into a hospital for prisoners. Two days before the term of my imprisonment elapsed I was told that I was amnestied.

- How did you choose where to go after you were released?

- I had some friends in St.Petersburg, I loved the city and went there. My friends worked at a public international AIDS organization, and I began working there too. When the project ended in 1996 we registered the Society of HIV-positive and AIDS patients where we currently study the plague of the 21st century and make people understand that HIV-positive people do not deserve negative treatment which they usually receive in the society. These people suffer from awful discrimination, I know. Today, there are 35,000 officially registered HIV-positive people in St.Petersburg. Many people got HIV-infected in 2000-2001 which means these people will feel unwell in another 5-6 years.

- Do you personally work with every patient staying at the Society?

- I have to do any work at the society because we have just five people of staff. It is a real problem today to employ people adequately treating the AIDS problem; unfortunately we cannot offer high wages, and what is more working here we have to face death and sufferings which is a distressing sight for many people.

- How do you stand sufferings of your patients yourself?

- I treat people coming to the Society only as patients, and try to leave my work problems in the office when I go home after work. I live alone because in the evenings I need retirement from people's problems that I have to solve in the office. I sometimes invite friends to stay with me for a couple of days, not more. But it is more convenient for me today not to share my apartment with someone. Almost all of my friends are HIV-positive, but some of my acquaintances and friends are healthy. Those who observe necessary rules while communicating with HIV-positive people will never get infected. This is interesting that within the past years my opinion of sex contacts has changed: before I was 40 sex was interesting for me, but when I turned 50 my way of thinking and desires seriously changed.

- What are you dreaming of now?

- Today I follow a healthy life-style. I neither smoke nor drink  alcohol. I walk a lot. I have the anti-retrovirus therapy which I have not had for more than 13 years. I would like to live an active life till the age of 80 and die being active, hope this will occur to me in my office.