"50 children a week at the sex change clinic. Some are 4 years old." 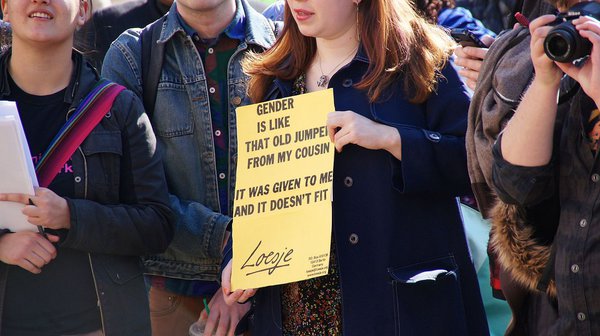 I just do report a British Mirror's article [ here:]

'Some are confused, others are trapped in the wrong body': Astonishing 50 kids a week referred to sex change clinics

Prisoners in the wrong body: yes, it is the self-justification of the trans.

"The increasing acceptance of the "gender" theme may have increased the number of children sent to specialists". It could, of course. But meanwhile, a growing number of babies suffer from being in a wrong body. Fortunately, in London, there are those who know how to heal them from their suffering: a department, paid by the National Health Service, called the "Gender Identity Development Service (GIDS)", has just been opened, helping children, young people and their families who experience difficulties in developing their genre. Such "service" is at the headquarters of a clinic "committed to improving mental health and well-being", which is called the Tavistock and Portman NHS Foundation Trust. It is a branch of the Tavistock Institute in London, of which we have already talked about, as it specializes in making "paradigm changes" in the mass mentality.

"Interesting institute, half psychiatric clinic and half branch of British armed forces, was founded and directed for a long time by Dr. John Rawling Rees, psychiatrist and brigade general. There they have always studied the aspects of psychological warfare. In 1945, General Rees, in his book "The Shaping of Psychiatry by War," suggested that methods similar to those experienced in the war could also implement social control in whole societies or groups in a time of peace".

We have already explained how this Institute supported the Frankfurt School, occupied in the 1940s, to prevent the rebirth in the West of the "authoritarian personality" from which, according to those philosophers, was born "fascism". In the words of Theodor Adorno born Wiesengrund: "The modification of the potentially fascist mental structure can not be achieved only by psychological means; is a task comparable to the elimination of neurosis, or of delinquency, or of nationalism: these are the products of the total organization of society, and are changed only if the society is changed. " Erotizing society, freeing it from sexual "taboos" was identified as the method of eradicating "fascism" from the minds and purifying them from the delinquency called "nationalism".

We see now that Tavistock has made great progress in the "paradigm shift", in the "social acceptance of gender" and in its "therapy". The number of children knocking on his doorstep "rose of 24% over the past six months, up to 1302". Two of these patients are 4 years old, another 17 are 6 years old. They want to change sex. But only at the age of 11 years, Tavistock, recognizing in them a "mild gender disorder", heals them "with powerful hormones to delay the onset of puberty: "Their health is not in danger [no... no...], and gives the children a longer time to make the crucial decision" says Professor Ashley Grossman, neuroendocrinologist expert in gender: "We use them in children who for whatever reason have premature puberty, even at 7 years, which can be stressful". There is no investigation into the hypothesis that perhaps the precocity is due to the hypersessualization to which children are exposed. Or maybe, to less confessed experiences.

"Come to a more adult age, 16-17 years old, they can decide whether they want to continue with gender realignment. Testosterone is given to girls and estrogen to kids, to trigger change". Easy way to happiness.

The beauty of the British mentality is that it applies pluralism of opinions.

Professor Miroslav Djordjevic, a "gender professor", gives a few doubts: in part, it can be a "fashion" or a whim of parents. "It's impossible to say that a five year old girl is transgender. And there is the danger that when they become adults, children can repent of what they have chosen".

Miriam Stoppard, a very busy doctor on TV: "I'm sure the universal acceptance of LGBTQ has helped legitimize and publicize gender dysphoria and its treatment".

But singer Paloma Faith, consulted, announces that she will raise her first child, born in December, as "gender neutral". In fact, "I want to have three children and will be of neutral gender".

The newspaper also informs us that Ria Cooper, born boy, who has become "the youngest patient of sex change" at age 15, is bored of being a woman and in the past few days - at the age of 18 - asked for the third operation to get back, say, man: now he understands that he feels comfortable as a normal homosexual.

It is referred as in Los Angeles lives and works a 23-year-old professional makeup artist Vinny Ohh who has done three plastic surgery operations and 110 face-and-body laser treatments, spending $ 60,000 to crown his dream: resembling a "genderless alien", that is, an extraterrestrial male or female. Now she is looking for surgeons to drop his penis so he can definitely crown his aspiration and he does not find it.

The new paradigm is in progress.

You will probably get the news that the "Michelle Obama Library" in California has organized a LGBT public reading for the youngest. A month of stories about this interesting educational topic. With at the center an "hour of drag queen story" in which the teacher is the disguised Kochi Mochi, who looks like a horned devil.

Luckily we have a runway. The work - if we want to call it that way - was already exhibited in August 2016 at the "Ruhrtriennale" in Bochum. Along with another creative product by the same artist, that Joep van Lieshout, whose meaning can escape to those who are not in the environment, unless we were able to relieve the sculptor himself: he wanted to represent a huge digestive tract ending in a huge anus. So educated, we can recognize that in this case the artist has renounced the stylization of his Domestikator, to adopt the most extreme realism or naturalism.

Van Lieshout had already illustrated the "CasAnus 2007" realization years ago - obviously the Dutch cannot think of anything else - a one-room home that "allows residents to realize the dream of life". Dreams cultivated by a certain gender, of course, not all.

He abused a 4 month old infant. Free after 3 years.

An example of opening to the new temperament is probably that of the Mons Surveillance Court, Belgium: Mr Alex M. (privacy, I recommend) has been jailed for only three years, which in 2013 had been sentenced to 7 by Liège's court of appeal, for having sexually abused, along with his woman, a 4 month old infant. Alex is already in liberty, but with the obligation to live more than 25 kilometers from his victim.

In the same order of ideas, it is worth noting a police case that occurred in New Jersey and reported by USA Today on 19 October. A guy named Stephen Salamek posted on Craiglist.com's website something that would look like this: I'm looking for "Woman / Moms who are in Cheese Pizza".

Arrested one who wanted "Cheese Pizza". It was not Podesta.

It is remarkable to note that when asking "cheese pizza" is any kind guy, for the FBI he is asking for sex opportunities with children; when asking Pizza is the entourage of Hillary Clinton, John Podesta and the customers of the Washington Pizzeria Comet Ping Pong, it's just literally the pizza they require. With cheese.

What to say. No comment. The change of paradigm is in progress.