In the absence of any real news, the international media outlets have adopted the North Korea story as the buzz-theme for the three-day news peak this week after a hydrogen bomb was successfully tested and after reports that ballistic missiles are being prepared. Three options: Time for sanctions, war or the D-word, Diplomacy? 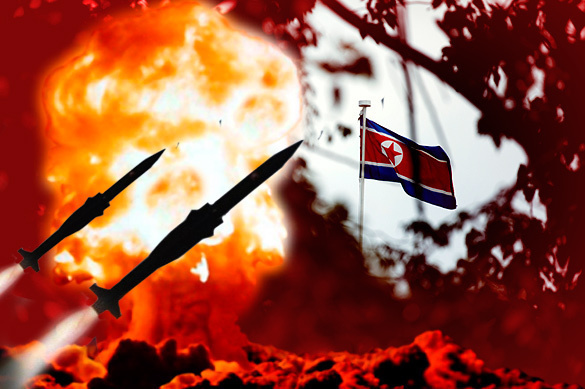 First off, sanctions do not translate as diplomacy any more than diplomacy translated as sanctions.  Vladimir Putin today reiterated Russia's position, mirrored by the People's Republic of China, that the only way forward in the current impasse is through diplomacy to air views on what Pyongyang wants and to create an environment in which that part of the world can live with the Democratic People's Republic of Korea, so-called "North Korea". California is thousands of miles away.

What does Pyongyang want?

What Pyongyang wants is already crystal clear. After its capital was reduced to rubble by the United States of America and its puppet regime, the Republic of Korea (South), after losing a quarter of its population to carpet bombing and after seeing massacres and tortures carried out by its southern neighbour, fellow Koreans, backed by their bully friend from across the Pacific, it is clear that there is no love-loss between Pyongyang and Washington. Just as there is no love-loss between many capitals and Washington. The Japanese can't stand the USA after Hiroshima and Nagasaki and after years of rapes and misconduct by US troops stationed in the country, the South Koreans smile to their faces and behind their backs deride them as being interfering and barbaric and secretly say "YESSS!" punching the air whenever their northern brothers and sisters show some mettle.

So after this baptism of fire, what the DPR Korea wants is Americans out of the Korean Peninsula so that they can talk to their counterparts from the South and start the process perhaps for a Federal State of Korea with two economic systems. Is that such a bad idea? We will not know unless Diplomacy, the D-Word which the West has forgotten, is given a chance. And for that to work, you need a level playing field, devoid of arrogance and high-handedness, two precepts which rule Washington's roost. You need a table, some chairs, some toilets, some meeting rooms, you need negotiators who use some emotional intelligence and you basically need two interlocutors - the North and the South. It is their country, not Trump's.

Sanctions - a hostile act and not Diplomacy

Sanctions. In a way sanctions are a belligerent, hostile act denoting bad will, bad faith and bad intentions. We have all seen how Washington treats Russia, imposing sanctions for illegal or non-existent reasons and the question arises, how can Washington call itself a friend of Russia on one hand while it is imposing sanctions on the other? You do not smile into someone's face and carry half a dozen stones or a knife behind your back and call the person a friend, not if you have any credibility. But then again after Iraq and Libya and Syria, Washington's credibility rating is somewhere near minus six.

Trying to cripple the government's actions in the DPRK will, as Vladimir Putin points out, be counter-productive, will make Pyongyang even more determined to raise the stakes after the imposition of what it sees as another act of war and will be a perfect opportunity for private players to enter the fray with sanctions-busting economic activity.

War. Pyongyang's message is bring it on. Sure, the USA could nuke the country. After all, what is the only country to have deployed nuclear weapons? North Korea, or the United States of America? But what good would that do? It would be an outrage striking a deep chord in the hearts and minds of every generation for the foreseeable future and would place Washington even further down the credibility list. After all, what right would the USA have to deploy nuclear weapons in the DPRK unless it was attacked first? None, not that Washington plays by international law. Ask the UN Security Council which Resolution justified the attack against Iraq under the UN Charter, read UNSC Resolutions 1970 and 1973 (2011) on Libya. The second option therefore is conventional war, in which the main victims would be also, South Korea (The Republic of Korea) and Japan. The markets would not like that, at all.

Back to diplomacy. The next question is, does Washington have what it takes? My answer is apparently not. It responds to fire with fire, it ups the stakes instead of using some intelligence and conducts massive war games which it knows is a provocation. In short, Washington acts like a bully. It attacks those who cannot fight back and provokes those who can until breaking point. There is only thing a bully understands - a smack in the face...unless a teacher steps in first and makes them shake hands. The teacher on the diplomatic stage is increasingly Russia, China and the CSTO.