Another Unsolvable Issue for Americans: Mass Incarceration, Prison Labor in the United States

The Federal Prison Industries (FPI) under the brand UNICORE operates approximately 52 factories (prisons) across the United States. Prisoners manufacture or assemble a number of products for the US military, homeland security, and federal agencies according to the UNICORE/FPI website. They produce furniture, clothing and circuit boards in addition to providing computer aided design services and call center support for private companies. 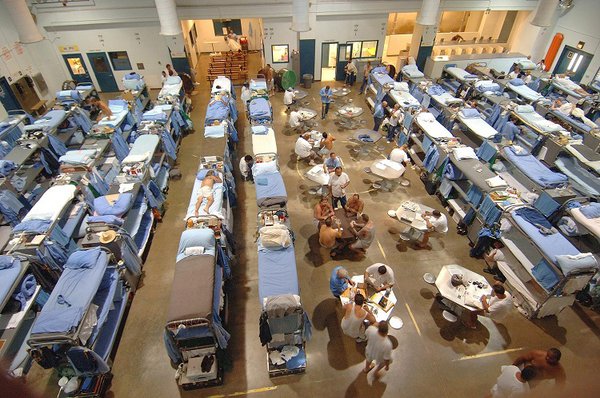 UNICORE/FPI makes its pitch for employing call center support personnel to firms thinking about off-shoring their call center functions. The logic is that, hey!, they may be prisoners, but it's keeping the jobs in the USA that matters. Fair enough. That approach cuts out the middleman though, those Americans desperate for any kind of work but, through no fault of their own, are not behind prison bars and employable by UNICORE/FPI.

Sure, it seems a heartless statement and there are any number of angles to take on why the USA is the world's number one incarcerator: Capitalism, racism, social and political injustice, a pay-as-you-go legal system, bone-headed policy makers, prison lobbyists, the death penalty, employment/unemployment, drugs, gangs, costs/prices and a host of behavioral, psychological and environmental issues that I have missed.

Inevitably the black hole that is money eventually sucks in and corrupts everyone from those in local communities desperate for the work a prison facility provides to those investors who profit from the prison industry. They earn their livelihoods and take their profits from the misery and labor squeezed from their human property--those prisoners who self-destructed and others who are serving terms way too long for the crime committed.

For the Love of Money

The prison labor industry is very keen on promoting its role in assembling the US military's widely used Single Channel Ground and Airborne Radio System (SINCGARS). In January defense contractor Harris Corp. was awarded a $403 million contract by the US Defense Logistics Agency for spare parts supporting tactical radio systems, which includes SINCGARS.

"UNICOR/FPI is a major supplier of SINCGARS radios, mounts, antennas, and installation and repair kits and when hard-mounted, our SINCGARS equipment meets rigorous military standards for shock and vibration in aircraft and tactical vehicles, such as Bradley's and Humvees. Through our nationwide network of factories and trained technicians, we have successfully met aggressive production and distribution needs for this crucial communication equipment in Middle East military operations."

Some of the purchases by the US Department of Defense include $14.8 million for electronic components, $887 thousand for communications equipment, $26.7 million for office furniture, $27.1 million for special purpose clothing and $7.5 million for body armor. The Department of Homeland security spent $372,255 on administrative support. The Executive Office of the US President spent $389 for signs and identification plates.

According to a Mother Jones article in 2015 somewhere between 30 and 40 percent of California's forest firefighters are state prison inmates with some 4,000 working at any one time on fire lines. So dependent on the inmates was California that prison reforms that would see the release of some of the incarcerated firefighters were put on hold for fear of losing the manpower to fight California blazes. Then California attorney general Kamala Harris, now a US Senator, was behind the effort to keep the "cheap" firefighters behind bars,

"Prison reform advocates have raised concerns that the state is so reliant on the cheap labor of inmate firefighters that policymakers may be slow to adopt prison reforms as a result. The concern was magnified last fall, when lawyers for state Attorney General Kamala Harris argued that extending an early prison-release program to "all minimum custody inmates at this time would severely impact fire camp participation-a dangerous outcome while California is in the middle of a difficult fire season and severe drought." Harris has since said she was "troubled" by the argument, and the state has ruled that minimum custody inmates, including firefighters, are eligible for the program so long as it proves not to deplete the numbers of inmate firefighters."

US Immigration and Customs Enforcement detains women, men, children, and LGBTQI individuals in over 200 county jails and for-profit prisons, according to the grass roots group CIVIC. Some of these individuals include legal permanent residents with longstanding family and community ties, asylum-seekers, and victims of human trafficking.

It was former President Bill Clinton (Democrat) who started to load up detention centers and jails with immigrants, CIVIC noted. "In 1996, President Bill Clinton signed the Antiterrorism and Effective Death Penalty Act (AEDPA) and the Illegal Immigration Reform and Immigrant Responsibility Act (IIRIRA), which doubled the number of people in immigration detention from 8,500 each day in 1996 to 16,000 in 1998. Today, the detention population has increased fourfold to approximately 34,000 individuals each day, due in part to a congressionally mandated lock-up quota"

President Donald Trump's (Republican) animosity to immigrants is well known. He and his aptly named attorney general Jefferson Beauregard Sessions will make sure detention centers and prisons are overfilled with men, women and children from Mexico, Central and South America. Trump and Session's maniacal quest wage war on crime, drugs and terrorism will likely ensure that many thousands more will find themselves locked away and working for UNICORE/FPI or lining the pockets of private prison company owners.

The non-profit group Towards Justice reported that a lawsuit is moving forward pitting private prison corporation against immigrants who were forced into labor while in detention.

"For the first time in history, a federal court allowed a class of immigrant detainees to jointly proceed with forced labor claims against the country's second-largest private prison provider. Judge Kane in the District of Colorado certified a class of between 50,000 and 60,000 current and former immigrant detainees held at GEO's Aurora, Colorado detention facility since 2004. These individuals, some of whom were found to legally reside in this country after months in detention, allege that they were forced to clean the detention center without pay and under threat of solitary confinement. This practice allowed GEO to reduce labor costs at the Aurora facility, where it employs just one custodian to maintain a detention center that houses up to 1,500 people at a time."

Everyone Has Their Hands in the Pie

In January 2017, the Prison Policy Initiative (prisonpolicy.org) worked up a study titled Following the Money of Mass Incarceration. It shines the light on some of the unsettling reasons why the USA will never be able to reduce its reliance on mass incarceration. Those who depend on money that the prison industry provides will never give it up. It's not just private companies but local communities, bondsmen, unions all the way up to the US Department of Defense who collect fees or purchase UNICORE/FPI products and services at dirt cheap prices.

"Bail bond companies that collect $1.4 billion in nonrefundable fees from defendants and their families actively work to block reforms that threaten its profits, even if reforms could prevent people from being detained in jail because of their poverty. Specialized phone companies win monopoly contracts and charge families up to $24.95 for a 15-minute phone call. Commissary vendors that sell goods to incarcerated people - who rely largely on money sent by loved ones - is an even larger industry that brings in $1.6 billion a year. 38 towns and cities in the U.S., more than 10% of all revenue is collected from court fines and fees. In St. Louis County, five towns generated more than 40% of their annual revenue from court fines and fees in 2013."

The over-incarceration of Americans is just one more vexing issue, piled on many-Afghanistan, Syria, education, Trump, Clinton's, health care, taxes--in which US citizens find themselves trapped and unable to reach across the pro/con divide and cause change.

John Stanton can be reached at jstantonarchangel.com.