"This fortress built by Nature for her self 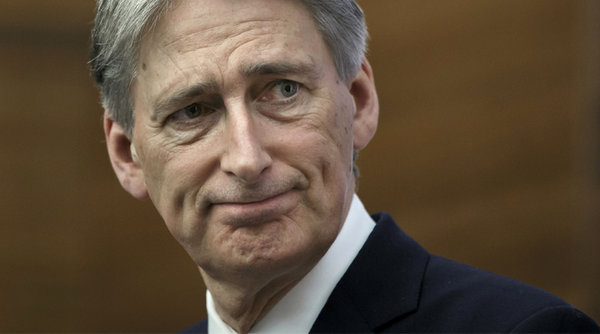 Against infection and the hand of war,

This precious stone set in a silver sea

This blessed plot, this earth, this realm, this England...

England, bound in with the triumphant sea,

Whose rocky shore beats back the envious siege ..."

Britain's top "diplomat", Foreign Office Minister Philip Hammond has accused "marauding" migrants - the desperate, dispossessed, bereaved, orphaned children even, attempting to reach the UK, where many have relatives, contacts or speak the language - of threatening Britain and Europe's "standard of living."

In a racist rant he told the BBC: "Europe can't protect itself and preserve its standard of living and social structure if it has to absorb millions of migrants from Africa." Ironically, Hammond before becoming an MP was an advisor to the government of Malawi. Since he clearly holds Africa in such contempt, perhaps Malawi should consider asking for a refund.

Hammond spoke just days after Prime Minister David Cameron described those seeking safety and succour not as a humanitarian catastrophe but as "swarms."

"Swarms" of course refer to crop destroying insects, locusts, and flies that buzz over and infect meat in open-air markets, on sunny days in Europe or swarming on dead animals or humans in the open and wild.

Cameron, vowing to clamp down on migrants, lashed out at France generally and the port of Calais in particular from where many seeking safety attempt to cross the Channel to the UK. He referred to those trying to "escape North Africa", since Libya - now a failed, lawless state thanks to US, UK and NATO's illegal overthrow of another legitimate government - has become a hub for those who wish to flee their own particular disaster and cross the Mediterranean to Europe.

As David Shariatmadari has pointed out this disgusting, shaming verbal feeding frenzy has been joined by the media with the Daily Mail writing that: "this tidal wave of migrants could be the biggest threat to Europe since the war", the Daily Express referring to a migrant "flood" and the BBC using "stream" and also "flood" with its implication of poor helpless Brits drowning, crushed under an uncontrollable tidal wave of terrifying "other beings" which have no place anywhere in Europe's ordered perfection, let alone in Britain's "sceptered isle."

Speaking from Vietnam where he was marauding with a large trade delegation, Cameron vowed a fortress Britain. Borders would be protected, the "problem dealt with at source..." that meant: "trying to stabilize the countries from which they come", he said with no sense of irony.

The main countries "from which they come" are Libya, Iraq, Afghanistan where UK insurgents have engaged in swarming and destroying and Syria where they are now doing the same. The majority are fleeing our enjoined destruction of infrastructures, homes, social society and human life on a scale that surely qualifies as genocide.

There are also people from Africa, many who had made livings and lives in Libya, fleeing the now failed state and others indeed looking for a better life. However given Britain and other European countries historical colonial plundering of Africa and more recent ongoing carpet bagging of oil, minerals, erasing or making untenable homes, villages, there is surely a duty to attempt to make amends by offering safety with grace and humanity.

And the reality of these "overwhelming" and "inundating" numbers? David Shariatmadari has the figures: "The number of first-time asylum claims lodged with the British authorities between January and March 2015 was 7,335, lower than in Austria, Sweden, France, Italy, Hungary and Germany. That figure represents only 4% of asylum claims across the EU and puts us 17th in the league table of claims per million inhabitants.

"If we look further afield, we see countries in the Middle East absorbing far higher numbers of refugees: there are 1.8 million Syrian refugees in Turkey, 1.1 million in Lebanon and 629,000 in Jordan."

Prior to Syria's Western backed destabilization and ongoing nightmare, Syria between 2003 and 2011 took in tens of thousands of Iraqi refugees, countless of whom have now been forced to flee again, as have their Syrian hosts, neighbours and friends.

"We have to deal with the problem at source and that is stopping so many people from travelling across the Mediterranean in search of a better life" said Cameron of people so desperate that they risk - and lose -their lives and savings in conditions defying description, the majority escaping what the UK and whichever of the marauding "coalitions" it had joined have wrought.

Greece, incidentally, bent under the weight of a desperate financial crisis with a population of just over eleven million has had an influx of 124,000 souls this year alone.

A furious friend commented commented: "If Hammond had been in the Foreign and Commonwealth Office during the last war, there would certainly have been no Kindertransport" (the evacuation of Jewish children from Germany) "couldn't have those 'marauding' Jewish people threatening our standard of living. What a monster the man is."

In fact, in spite of the horrendous threat facing the Jewish population of Europe, the UK behaved equally disgracefully then. Having raised the means to send their children to the UK, many of whom never saw their parents again, the UK government of the time demanded that £50 was lodged with them for each child as a guarantee of their ultimate resettlement. Taking 1939 as a starting date, that is the present day equivalent of £3,002.66.

"I've visited the wretched refugee camps in Darfur and I've walked around post-earthquake Haiti. But in all my years of working in aid and development, I've never been as shocked as the day I met a group of 10-year-old Syrian boys, riddled with scabies, huddled together in a rain-sodden ditch under scraps of tarpaulin.

"Alone and afraid, these boys, all orphans, weren't in Lebanon or Jordan but in a remote field 20 minutes' drive from Calais, close to a service station where lorries stop.

"Increasingly we, the charity Doctors of the World, treat patients who have shattered bones after falling from trucks, who have been slashed by razor wire climbing fences or have been beaten up."

That is after they have trecked cross Europe or escaped drowning in the various crossings. In one boat crossing the Mediterranean two hundred people are believed to have perished: "Knife-wielding traffickers sealed migrants in the hull of a boat which sank off Libya, condemning them to drown after slashing or thrashing them depending on their ethnicity, according to survivor testimonies."

Just a microcosm of the unimaginable misery caused by marauding interventions and mass murder of which Britain's successive governments can never resist being part of.

As for Hammond and Cameron's shaming statements, incitement to racial or ethnic hatred is a criminal offence under the 1976 Race Relations Act which includes:

*inciting inflammatory rumours about an individual or an ethnic group,   for the purpose of spreading racial discontent.