" ... do we provide training and advice and help in order to make sure that countries actually obey the norms of humanitarian law? Yes, we do." (David Cameron, Prime Minister's Questions, 21st January 2016.) It has been a bad week for Prime Minister David Cameron's decimation-bent government at home and abroad. 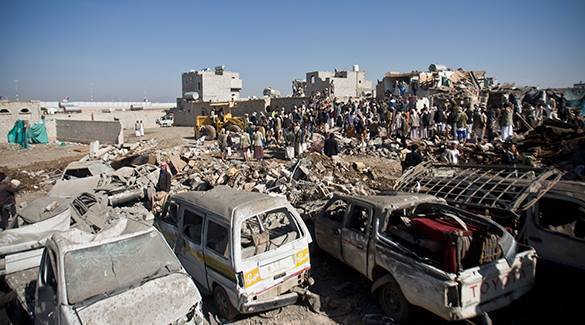 His Chancellor, George Osborne is hell bent on targeting, it seems, all but the mega-rich and the multi-nationals, determined to erase all affordable social housing in a country where the average salary - before tax - is £25,500 (2014 figure) and the average rent for a modest flat is £816 and £1,000 in London.

The disabled and ill, are targeted by ever more draconian measures. A petition demanding the government publish the figures of how many ill, disabled and in need people had died or committed suicide has gathered a quarter of a million signatures so far. A publication the government has refused in spite - or perhaps because of - a spate of reports of heartrending tragedies in the media.

According to current figures by the Institute for Fiscal Studies, Britain's poorest families whether working or unemployed, were an average of £1,127 a year worse off since the implementation of "reforms" since the Conservative government came to power in 2010.

In 2013, the Taxpayers Alliance found that two hundred and fifty four tax rises has already taken effect and that taxes would have risen near three hundred times by 2015.

However it has now come to light that Osborne has received: " ... a share of £335,000 from his family firm - even though it hasn't paid tax for seven years."

Allegedly, the Osborne and Little Group has paid no corporation tax since 2008, a Sunday Times investigation claims. The London based company: "brought in £34 million in revenues in 2015 ..."

Troubles seldom come singly, thus in the same week George Osborne's brother, Dr. Adam Osborne, a psychiatrist, has been struck off (from practicing medicine) for life by the General Medical Council for a relationship with a patient of which the Medical Tribunal judged: " ... his conduct 'deplorable' and 'profoundly unacceptable.'

In 2008 Dr. Osborne was also: "...  barred by the General Medical Council from working as a doctor for six months after he prescribed drugs to four people - two family members, a friend and a cocaine-addicted prostitute he had an affair with." It was also alleged he tried to use a false name.

Meanwhile Health Secretary Jeremy Hunt has so enraged the country and most of all the medial profession that doctors across the country have gone on strike twice for the first time in forty years.

Hunt has also been accused of "misrepresenting" health data by Dr Peter Holt, a vascular surgeon at St George's University of London, who states he has written to Hunt, the Health Select Committee and Labour's Shadow Health Secretary, Heidi Alexander raising his objections, which include "continually misrepresenting" findings.

Approaching 300,000 signatures (and rising) expressing no confidence in the Health Secretary are on a petition on the government website in just over four days. At 100,000 David Cameron has given a commitment that such petitions to the government must have a Parliamentary debate.

Jeremy Hunt could face one of his most embarrassing days in office if the debate takes place. Given the public anger and that of many MPs including in his own Conservative Party, such a debate might be hard for even David Cameron to slither from.

Dick of the Year

As he awaits the decision Hunt will be able to ponder having been voted "Dick of the Year" by viewers of Channel 4's "Last Leg" programme - with over 80% of the vote.

However, Osborne and Hunt's woes might yet pale against those of David Cameron on whom the heat is rising regarding his arms sales to Saudi Arabia which is illegally bombarding its southern neighbor Yemen, obliterating all needed to support life: trade, agriculture, medical facilities, schools, manufacturing, food storage warehouses, markets, buses, civilian vehicles, plants providing water and electricity, the Capitol's airport. According to the UN, camps for the internally displaced and refugees have also been targeted.

On the 5th February, speaking in London, in a rare intervention in the horrors inflicted by the West and allies in the Middle East and North Africa, UN Secretary General Ban Ki-moon stated: "Yemen is in flames and coalition airstrikes in particular continue to strike schools, hospitals, mosques and civilian infrastructure."

He stated that Yemen "was awash with weapons", adding: "We need States that are party to (the) arms trade treaty to set an example in fulfilling one of the treaty's main purposes - controlling arms flows to actors that may use them in ways that breach international humanitarian law".

He pointedly commented that permanent Members of the UN Security Council, which includes Britain, had special responsibilities in securing peace in complex disputes.

As the Guardian put it: "The normally mild mannered Ban made his pointed remarks in a speech in which he bemoaned the failure of major powers to live up to their promises to prevent massacres and human rights abuses on the scale of Syria, Rwanda, Srebrenica, Cambodia and Yemen. The promises of 'never again', he said, have become more muted."

The UK has admitted to training Saudi pilots involved in the air strikes, has military "advisors" in Saudi control rooms and has granted arms export licenses totally near £3 Billion in the last six months alone. Arms sales of £5.6 Billion since 2010 include seventy two Eurofighter Typhoon aircraft worth a further £4.5 Billion on completion, according to the Campaign Against the Arms Trade.

Now, in addition to the UK Parliament's influential International Development Committee also having called on the Cameron government to suspend arms sales to Saudi the European Union has also weighed in with criticism over the arms sales.

On 25th February there will be a vote in the EU Parliament on an EU-wide embargo on arms sales to Saudi which will be "specifically" critical of the UK.

'The European parliament's resolution condemning Britain's involvement ... states that the parliament "strongly criticises the intensive arms trade of EU member states with various countries in the region, as in the case of the UK, Spain, France and Germany; calls for an immediate suspension of arms transfers and military support to Saudi Arabia and to its coalition partners." '

It adds: "Saudi Arabia is the UK's largest customer for weapons and the UK is the biggest supplier of weapons to Gulf Cooperation Council countries."

The UK government has to date, ignored all calls for the halt of arms to Saudi Arabia, despite the country's appalling human rights record and illegal onslaught on Yemen.

However Alyn Smith, a Scottish National Party Member of the European Parliament says if there are no hitches and the vote goes ahead, it will "certainly" be passed. "We are determined to drag this issue kicking and screaming into the daylight", he vowed. And with it Cameron and his Ministerial and other arms dealers, many near and far will be fervently hoping.