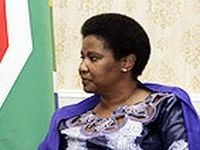 Phumzile Mlambo-Ngcuka from South Africa appointed as new UN Women Executive Director - The announcement was made through the Spokesperson of the UN Secretary-General at today's news briefing.

"Ms. Phumzile Mlambo-Ngcuka brings to this position, a wealth of experience in advocating for women's issues with a combination of strategic leadership, consensus building and hands-on management experience. She was the first woman to hold the position of Deputy President of South Africa from 2005 to 2008. Ms. Mlambo-Ngcuka initially became a member of parliament in 1994, chairing the Public Service Portfolio Committee. She was deputy minister in the Department of Trade and Industry (1996-1999), Minister of Minerals and Energy (1999-2005) and briefly served as acting Minister of Arts, Culture, Science and Technology in 2004.

Ms. Mlambo-Ngcuka was Young Women's Coordinator for the World Young Women's Christian Association in Geneva (1984-1986) and served as the first President of the Natal Organization of Women, an affiliate of the United Democratic Front, when it was formed in December 1983. Ms. Mlambo-Ngcuka established Umlambo Foundation in 2008 to provide support to schools in impoverished areas in South Africa through mentorship and coaching for teachers and in Malawi through school improvements with local partners.

Ms. Mlambo-Ngcuka replaces the outgoing UN Women Executive Director, Michelle Bachelet, who took up the post in the newly-created UN department in 2010 and whose tremendous contribution to gender issues was praised recently by UN Secretary-General Ban ki-Moon:  "Michelle Bachelet was the right person in the right job at the right time," he said.

"Her visionary leadership gave UN Women the dynamic start it needed. Her fearlessness in advocating for women's rights raised the global profile of this key issue. Her drive and compassion enabled her to mobilize and make a difference for millions of people across the world."

The legacy of Michelle Bachelet is, in the words of Ban ki-Moon, "stellar" - she introduced new measures to protect women and girls from violence, made advances on healthcare for women and placed the empowerment of women and gender equality at the forefront of UN and world policy. Earlier this year over 130 states signed a socument to prevent and eliminate all forms of gender violence.

Ms. Bachelet has decided to resign her post to spend more time in her country of birth, Chile, where she served as President from 2006 to 2010.