Exterminating Christianity in France to create the new French

The French riot police burst into the Church of Saint Rita, a small medieval Gothic temple in Paris in the middle of a service and demanded the church should be closed immediately. It turned out that the plot of land, on which the church stands, was sold for construction. Instead of the historical monument, the local authorities plan to build a parking lot there. It was ruled that the building of the church represented no cultural value ​​and was subject to demolition due to its dilapidated condition. The police had to drag the priest out of the church as he refused to leave the building. 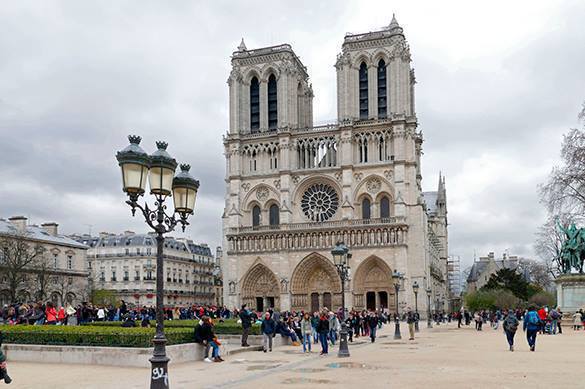 The Church of St. Rita is the only site in Paris, where people can pray for animals. Many parishioners go there with their pets. Saint Rita is a Catholic patroness of animals. Yet, the new France does not need any Christian saints or prayers for pets. The authorities of the Fifth Republic do not need the elderly French with their ridiculous for European officials traditions either.

We are living in the times of LGBT, unisex and mixed cultures, where it is dangerous for Europeans to prove their national identity. Many are forced to publicly declare that they are not Christians not to be persecuted by so-called new citizens, immigrants in first or second generations, who arrived from former colonies of the French Empire or from abroad. Some French people even give their children Muslim names in a hope that it will protect the children from persecution.

Most of the newcomers traditionally identify themselves as Muslims. The majority of them do not have the knowledge of literary Arabic. They do not know the prayers, nor have they read the Quran or the Hadith. Yet, from the point of view of those people, Christianity is a religion of losers. Revanchist sentiments are particularly strong in Arab-populated suburbs of French cities. Many French Arabis believe that they now take revenge on France for its crusades of the past.

Such opinions are common in modern-day France, while the local Old French population is strictly forbidden to say something in their own defense. They are told to endure. However, during the last 20 years, the French authorities have been conducting anti-religious propaganda in the name of, so to speak, social tranquility. It seems that this propaganda has passed into its final stage. More than 15 years ago, images of Christ, saints and crucifixion were ordered to be removed from all schools in France. Please note, that all this is happening in a country, where religious symbols are there and everywhere.

Furthermore, the French people were forbidden to wear pectoral crosses on top of clothes, even as jewelry. The logic is simple: if, let's say, we forbid the Muslim veil, why should Christians demonstrate the crucifix?

As we can see, the French authorities have been waging a war against the traditional culture, teaching the population not to defend it.

The offensive of triumphant Islamism in France is directly associated with the death of religion and atheism. When the largest mosque in western France was built in the city of Nantes (historical province of Brittany), just a small handful of people took to the streets to express their protest. However, when it came to the destruction of rabbits inhabiting the aerodrome field of the local airport, a half of the city stood up to protect the animals.

As for places of pilgrimage, France has forgotten its saints. The author of this article could see for himself that people did not go to the cave of St Mary Magdalene on Easter. The locals have forgotten their way to the temple.

Today's France is all about spiritual vacuum and militant Islamism. In today's France, people do not  want to protect their churches. The French officials, who settle migrants and demolish churches for parking lots, are not aliens from outside - they are respectable French citizens.

The destruction of Christian churches is not a new phenomenon in France. The classic scenario recognizes the church a dilapidated building. They can also be used as for social needs, such as hotels, dance clubs, etc. In northern France, they sell churches for a nominal fee to local Muslim communities that subsequently transform them into mosques. The French indifference is shocking. It appears that the French people have water running in their veins instead of blood.

Nevertheless, it would be incorrect to say that the fate of churches is of no concern to everyone. At the same time, there is no political movement in France, not even the National Front, which would protect the traditional religion of France. From the social point of view, the French are at least 40 years behind the contemporary Russian consciousness. The French society does not realize the role of religion. Moreover, the French society does not realize that it is falling victim to a social experiment, the ultimate goal of which is to create the new French.