The Central Council of Muslims in Germany proposed that federal authorities formalize two Islamic holidays as official holidays. This is not shocking news, as in some areas Muslims already have that right. Recent polls suggest that in the future the Turks want to see Germany as the country with a predominantly Muslim population. So far they have minimal representation in the legislature.

Germany is Europe's second largest after France in terms of number of residents who practice Islam. The country does not have statistics with regard to the citizen's religion. But, according to the Federal Office for Migration and Refugees, the number of Muslims ranges from 4 to 4.5 million. The largest group is the Turks, with approximately 2.5 million people. They are followed by people from Bosnia and Herzegovina, Bulgaria, and Albania, and in the fifth place are immigrants from the Middle East.

Sixty-two percent of German Turks would prefer to live in a compact community. Nearly half (46 percent) would like to see Germany as a country where Muslims are more numerous than Christians. These are the results of a telephone survey of 1,011 migrants from Turkey conducted in August of last year by the Institute Info GmbH. The Institute's Director Holger Liljeberg told Die Welt that among the respondents, 37 percent identified themselves as very religious, and only nine percent - secular, which is more than in 2010. Forty-four percent pray at least once a day, 34 percent make it mandatory to have five prayers a day. The greatest religiousness is observed in the younger age group. This was also indicated by the Interior Ministry of Germany that claimed that 24 percent of German Muslims without citizenship at the age of 14 to 32 years are extremely religious, and have a negative attitude towards Western values. All these data suggest that the integration of Muslims in Germany is not as an optimistic of a phenomenon as it appears in the German press. 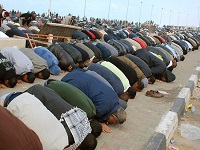 Chairman of the Central Council of Muslims Aiman ​​Mazyek proposed to introduce two new holidays. One is Eid al-Fitr and another one is the fast-breaking day of Eid. It would be "an important political signal of integration" and would highlight the "tolerance of our society," said Mazyek to newspaper Westdeutsche Allgemeine Zeitung (WAZ). He stressed that it certainly was not a matter of red days on the calendar, but the official right to free Muslims from work on these days.

The position of Muslims in Germany is quite strong. The former Federal President Christian Wulff generally believed that "Islam was part of Germany." Some lands and cities with federal status (Hamburg, Bremen, Hesse, Baden-Württemberg) have approved the Muslim holidays as official. The mayor of the city of Hamburg (SPD), signing an agreement with the Muslim community, said that it would certainly be a revolutionary milestone in the history of the city. Despite religious and ethnic background, we are all citizens of Hamburg, he added. Indeed, the document provides not only the right not to work on Muslim holidays, but also free access of Muslim organizations to prisons, hospitals and schools, the ability to create theological universities and theological schools whose diplomas will be recognized on a legal level, teach the Koran courses in the public schools, and foundations of Islam on an optional basis.

These are undoubtedly great achievements, but not a single land was able to legally allow a Muslim headscarf. Not only that, a conflict in one of the schools in 2003 ended with the ban on wearing it in eight of the 16 subjects of the German federation. However, Muslims in Germany periodically come up with new initiatives. Head of the Turkish Community in Germany Kenan Kolat said the Eid al-Fitr (Eid al Adha) should be a day off for all German students, not just for Muslims.

The latest initiative of the celebrations at the federal level, however, is unlikely to be supported in the Bundestag, since, like wearing a headscarf, it is demonstrative. Interviewed by WAZ newspaper, the CDU politician Wolfgang Bosbach said that in Germany there was no need to introduce official Muslim holidays, as Germany did not follow the Islamic tradition. Volker Kauder said that Muslims, of course, were part of Germany, but not Islam, that is not a part of the tradition and identity in Germany.

In addition, it must be admitted that the attitude of the community towards Muslims can be viewed as latent Islamophobia. It is heated by the statements of Interior Minister Hans-Peter Friedrich that Germany is under the gun of terrorists preaching militant Islamism. The number of radical Islamists has increased two-fold over the year, from 400 to a thousand people, the Interior Minister said on the eve of the tenth anniversary of the terrorist attacks in the United States.

It is particularly disturbing that the idea of "al-Qaeda" and similar extremist groups is picked up by residents of Germany originating from Muslim countries of a second or even third generation.

However, in May of last year the Ministry virtually condoned the organization of a far-right Pro-NRW competition of caricatures of the Prophet Muhammad in the cities of North Rhine-Westphalia. It quietly watched as nationalists held a demonstration displaying cartoons outside of a mosque and intervened only when there was a clash between them and the Muslims. Minister of the Interior of North Rhine-Westphalia Ralf Jäger said that the riots were not spontaneous. "The Salafis mobilized their supporters across the country," he said. Maybe they had to intervene at the stage of another promotional campaign, a conspicuous distribution of the Koran among Christians? Then the media would not write that "the Germans declared a war on Islam."

The Initiative did not receive approval for another reason - Muslims in German politics is a very rare case. Of the two and a half thousand German MPs of different levels, from the land Landtags to the European Parliament, only about a hundred people have foreign roots, the newspaper Russians in Germany reported. Experts say that this number does not reflect the real national composition of Germany, where one in five is an immigrant or a descendant of immigrants. One of them is Lale Akgn, member of the SPD, who believes that in Germany it is often difficult to call Germans citizens with immigrants' background.

This is true, but we must not forget that Germany, unlike the U.S., Canada or Australia, was not created by immigrants and has a Christian and not Muslim cultural and religious traditions.