Anatoly Karpov: History is not a game of chess 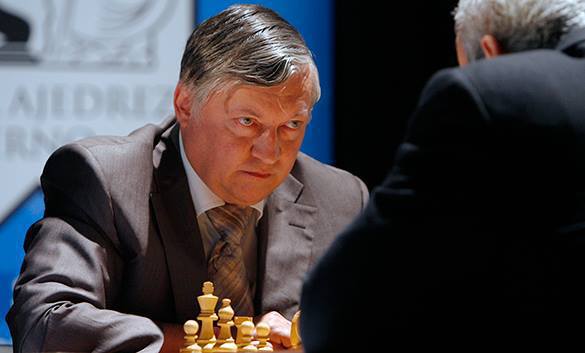 Pravda.Ru conducted an exclusive interview with famous chess player, International Grandmaster and social activist Anatoly Karpov, Russian chess grandmaster and former World Champion. The topic of our conversation was not the game of chess, but the situation in the society and in the world. In the interview, Anatoly Karpov talks about origins of the crisis in Ukraine, attempts to rewrite history of WWII and about the revival of a strong Russia.

"I've been involved in the peace movement for a long time. I also became the chairman of the Soviet Association of Peace Foundations. For 33 years, I act as the head of the International Association of Peace Foundations - the organization that managed to stay afloat even in most difficult years. I have been working in peacemaking and humanitarian field since the end of the 1960s.

"After the collapse of the Soviet Union, peacekeeping organizations in different countries lost efficiency and interaction. Today, there is a huge demand for them, taking into account the events that take place in Ukraine and all around the world. One can recall military conflicts in Yugoslavia, then Libya, Iraq, Iran, Afghanistan, Syria, Egypt ...In Somalia, the problem remains as serious as it was. Last year, for the first time in the last 20 years, a very large conference of peacekeeping organizations was held in China. It seems to me that in different parts of the world people felt that they have to do something.

"There is a lot of pressure from military-industrial complexes. Naturally, economic interests are connected with military interests. Economic interests of military-industrial complexes, in fact, take us to both local and global conflicts. After all, they have to use weapons that they constantly produce. Yet, there is no balance of power. Peace-making public organizations have always served as the balance of power. Antiwar demonstrations already take place around the world, and I think that some day they will take a completely different scale."

"The UN used to be a highly reputable organization. Now it appears that this organization has its eyes veiled. When you hear what they say at UN meetings, it makes your hair stand on ends."

"India and China are not very supportive of important decisions that need to be made."

"Again, this is because manufacturers do not support them. Even when it comes to ecological issues, the solution of environmental problems takes an international character. The leaders, who are elected for four years, will not think about what will happen in ten years. Those, who come to power to be reelected again to look farther. Most political leaders and parties that come to power proceed from their interests that they have during their election period. Yet, the solution of environmental problems can not be placed inside a  framework of four or five years. One has to have some forces that will keep pressing them."

"Is it possible to create a tool of independent peace organizations that could  show influence on the situation?"

"Is there any progress at all?"

"Yes, there is, for the first time in my memory. Previously, environmental conventions were disappointing in practical terms. Many conference participants want to show themselves, without listening to others. One of the biggest problems that the world faces today is people's unwillingness to listen to each other. They just can not do it anymore."

"I am afraid that people could never listen to each other."

"At the Yalta Conference in 1945, three world leaders managed to come to an agreement, although they had a very strong disagreements. But still, they managed to find common language. Why can't it be possible today?"

"Indeed, this is surprising. In the past, they managed to agree on all borders of Europe. Today, they fail to agree on Ukraine and the Crimea. Western leaders do not want to study history a little. In the United States, they do not dig into history much. They are young. But there are European leaders - the Old World knows and respects its history."

"How do you assess the attempts to rethink the results of the Second World War?Poland has been particularly active at this point."

"Poland has to be careful, because Germany might recall its territories that it had  before the Second World War. I would recommend them to be more careful with history."

"When it was offered to hold Victory Day celebrations in Berlin, we said we could give it a try. Do the Germans want the Russian Army to march in Berlin?"

"I think that this proposal shock the Germans. In Germany, people at all levels realize and very much regret that Germany had those pages of history. Recollecting all this in Berlin, holding a Victory Parade in Berlin - only a mentally unbalanced foreign minister could make such a proposal.

"For the Poles, it is blasphemous to rethink Auschwitz, to distort history. Such statements show ignorance and complete disregard for history. Poland should be grateful for being liberated, because in terms of losses, Poland stands at the level of the Soviet Union, at the level of Russia, Belarus and Ukraine. Poland suffered greatest losses during the Second World War."

"I've been to Poland many times. I have good relationships with many, I have friends in Poland. About eight years ago, I opened a chess school near Krakow. The Poles in Krakow and near remember that it was Soviet soldiers and officers who liberated the city."

"Let's hope that everything will be fine. We will win, because we are the descendants of the winners."

"Exactly. The West is standing up against Russia now, but this is natural. During the 1990s and in the beginning of the 2000s, Russia was weak and the world stopped paying attention to it. Suddenly, Russia began to rise to her feet. No one likes a new and strong power to emerge."