How the fall of Soviet Union ruined middle-class Americans 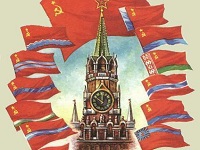 Soviet Russia was labelled Evil Empire not because it was evil, but because it was preventing capitalistic oligarchies form destroying old nations and social welfare anywhere. The left and the communist parties especially in France, Italy or democratic Spain were then able to take the power or at least to limit social danger. In America, the system had to show that it could deliver for most of the citizens.

The crumbling of Soviet Union in the Eighties, helped by the betrayal of Mikhail Gorbachev and part of the bureaucrat elite, put an end to that golden age in the West. It was time then to pretend that the superiority of western capitalism was obvious, it was time to free the markets, it was time to privatize, cut social spending, grow a huge and useless debt, and it was time too to organize a mass-immigration able to replace our peoples. The arrogance of neo-liberalism has since been complete, helped by the chaotic wars and the submitting of the presstitute and almost any kind of media - except on the web.

I always thought alike since the fall of the Berlin Wall. This time I have the satisfaction of being approved by American Nobel prize Jo Stiglitz who happens to write these curious lines in the NYT. The famous newspaper is glossing on the great divide, following the huge success of a French economical book in America, written by scholar Mr Piketty. Even the dumber of the Americans acknowledge know there is something wrong in their néocon paradise!

Mr Stiglitz tries to answer the delicate question: why have we fallen so low?

And shyly he gives us the right answer:

So why has America chosen these inequality-enhancing policies? Part of the answer is that as World War II faded into memory, so too did the solidarity it had engendered. As America triumphed in the Cold War, there didn't seem to be a viable competitor to our economic model.

Once there would be no Soviet Union, it would be time to crush labour forces, cut social spending and eliminate any kind of protest. The financial system would be able to help only the richer. The ageing of western population would make easier this gloomy agenda. Now 300 Americans are as rich as the 100 million poorest! It's worse then in Brazil!

Ideology and interests combined nefariously. Some drew the wrong lesson from the collapse of the Soviet system. The pendulum swung from too much government there to much too little here. Corporate interests argued for getting rid of regulations, even when those regulations had done so much to protect and improve our environment, our safety, our health and the economy itself.

As we know in 2008 the oligarchy chose Obama as a mask to cover its incoming wars and iniquities. Obama and his administration did not help but the poor, like the brave Sheriff of Nottingham, the richest and the banks, while accelerating the destroying of the famous American middle class.

Like Mr Craig Roberts, but much slower, and much hypocritically, Mr Stiglitz concludes that we must end the rent-seeking society we have gravitated toward, in which the wealthy obtain profits by manipulating the system.

My answer will be a question: why must we? Why must they? The oligarchs who own America and the media and need more wars on Russia or more sanctions on France's banks will not stop there. Sheldon Adelson wants his war on Iran and he will buy the next republican whore candidate who will be presented like a global reformer, even if we start an atomic war the following week.

I remember perfectly one similar psy-op: eight years ago, after the incredible Bush's years of American misconduct, the NYT was giving some columns to annoyed economists, to scrupulous and repentant experts who, like Mr Stiglitz, were apologizing and promising that a better future was possible in America. Mr. Krugman, Thomas Friedman and so on were already weeping all they could!

But there won't be a better future in America because there is no more Soviet Union to threaten a global elite running mad.

We may just get some hope from Russian resilience, Chinese protests and of course a populist wave in America. Will it be enough?