U.S. President Barack Obama is very active in condemning the actions of the authorities in Venezuela, Ukraine, and Syria. Yet, he does not see the deaths in similar circumstances in Egypt, Bahrain, or Thailand. This is not a political shortsightedness but an elaborate chess game participation in which Obama is denying. Or is he not cynical and believes in what he says? 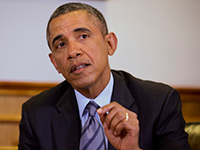 "Our approach as the United States is not to see these as some Cold War chessboard in which we're in competition with Russia," Obama said on Wednesday speaking at the summit of the North American Trade Agreement (NAFTA) in Toluca, Mexico. "Our goal is to make sure that the people of Ukraine are able to make decisions for themselves about their future, that the people of Syria are able to make decisions without having bombs going off and killing women and children ... because a despot wants to cling to power," said the President who recently was willing to kill Syrian women and children.

"My hope is at this point that a truce may hold but ... ultimately the government is responsible for making sure that we shift toward some sort of unity government, even if it's temporary, that allows us to move to fair and free elections so that the will of the Ukrainian people can be rightly expressed without the kinds of chaos we've seen on the streets," Obama said. These recommendations are interference in the internal affairs of another country. What court has proven that previous elections were not free?

Even more inadequate are the statements made ​​by his subordinates. "I have long stopped trying to guess what is on the mind of the Russian leadership," said one State Department official to RIA-Novosti. Nevertheless, for some reason she is convinced that the interests of Moscow and Washington on the Ukrainian issue are largely the same: "Don't we have a common interest in the restoration of Ukraine, stability and political unity, protecting the integrity of the state?" Perhaps the interests are common, but the means to achieve them are quite different. The U.S. does not realize that unbridled support of Bandera followers is dangerous for them because they are professional terrorists in many things are worse than al-Qaeda.

However, U.S. sanctions are not imposed against the parties "Freedom", "Fatherland" and "HIT" but against 20 Ukrainian officials who are trying to keep away terrorists operating according to the Syrian scenario.

In Toluca Obama turned his eyes to Venezuela, where riots that led to the deaths of six people have been ongoing for over a week. While so far the scale is still far from the Ukrainian, the scenario and methods are the same. Even the recommendations of Obama who demanded that the government of Nicolas Maduro addresses the legitimate demands of their people instead of distracting their attention by the expulsion of U.S. diplomats on false accusations are similar. Obama called for the release of detainees and engaging in a "constructive dialogue" with them.

Why did the U.S. president say nothing about Thailand where people are dying in the fight against the government? Why did he not impose sanctions against the Egyptian officials and General Abdel Fattah Sisi, responsible for the coup that killed over 550 people? Obama only canceled joint military exercises, said some standard phrases about regretting the victims and said that America could not determine the future of Egypt, it was up to the Egyptian people, and added that the U.S. did not take the side of any political party or political figures.

However, Nicolas Maduro, unlike Viktor Yanukovych, is clearly assessing the situation and is acting tough. He arrested the main opposition, expelled three American diplomats in 48 hours and said that the developments in Ukraine had the same sponsors who prepared activists for the unrest in Venezuela. Foreign Minister Elias Hawa accused U.S. officials at different levels of assisting paramilitary groups and their financing through front organizations.

"All statements of Obama, Kerry and other U.S. officials are boring and meaningless," told Pravda.Ru Vitaly Tretyakov, editor in chief of Political Class. "No other country intervenes in the internal affairs of other countries more than the U.S. does. No country in the world has bombed more than the Americans bombed. Perhaps Russian diplomats, politicians, and high-level authorities should intervene to tell them that this is what they do, but it does not merit a serious discussion," said Tretyakov.

"American politicians are divided into two types. The first one believes their own fairy tales, the rosy one about themselves and the dirty about everyone else. The second type is the cynical one, they know that their words are not true, but say them anyway. I do not rule out that Obama belongs to the first type, but for us there is no big difference. In a recent statement, he said that the Ukrainian army should not interfere, or else. That is, the Ukrainian army has no right to interfere in the internal affairs of Ukraine and the U.S. has this right to interfere in the internal affairs of Yugoslavia and Ukraine. The Americans do not understand the absurdity of their statements, and, unfortunately, it is the most powerful country with a strong network of military bases, NGOs, secret Service, and it intervenes in every way, from moralizing to bombings. There is no need to listen to them, we have to protect our own interests," concluded Vitaly Tretyakov.

The last phrase is key. All this would be boring and meaningless if it were not that scary. It appears that a new wave of color revolutions is being prepared, now at the global scale. Who's next, Brazil, India, or Russia?