Russian President Vladimir Putin stated that the bellicose rhetoric about the crisis on the Korean Peninsula was ruinous. According to him, the USA and the DPRK (North Korea) should establish a direct dialogue to discuss the situation because a global attack on the hermit kingdom is not likely to bring any results. 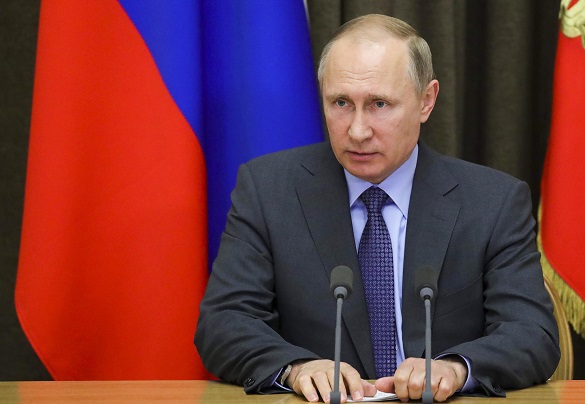 "The rhetoric from all sides should be toned down, and one should find ways for a direct dialogue between the United States and North Korea, as well as between North Korea and the countries of the region," Putin said on Wednesday at a plenary meeting of the international forum "Russian Energy Week" in Moscow.

"This is the only case, when one will be able to find a balanced and acceptable solution to the crisis. Everything else is a very dangerous and dead-locked way to go."

Those who try to talk to North Korea from a position of strength will only make the regime in Pyongyang stronger, the Russian president believes. He noted that a global strike against the DPRK is possible, but it is unlikely to achieve the goal of disarmament. "Let's just say it straight out. Can one strike a global disarming blow? Yes, it is possible, but will it reach its goal? No one knows the answer to this question, because no one knows for sure what Pyongyang has and where - this is a closed  country," Putin said.

According to Putin, Kim Jong Il, the former leader of the DPRK, told him in the early 2000s that North Korea had an atomic bomb. However, Western countries continued to provoke Pyongyang. As a result, the DPRK now has a hydrogen bomb too.

According to Putin, it is possible to overcome the crisis if the DPRK and the United States develop a common plan of action. US President Donald Trump listens to arguments coming from the Russian side, Putin believes.

"We talked about the problem (the North Korean nuclear problem), and he listens to all arguments that he can hear," Putin said.

When asked whether Russia is worried about Pyongyang's nuclear tests, Putin said that Russia has  a common border with the DPRK. The nuclear test site is located on the Korean territory 200 kilometers from the territory of Russia. In this connection, Moscow is even more concerned than the USA about North Korean nuclear tests.

At the same time, Putin noted that Russia practically does not have trade and economic relations with North Korea. "We supply about 40,000 tons of oil there, but none of the vertically integrated companies supplies anything there at all - only small companies do and second-hand dealers. This is zero, almost nothing. There is nothing to talk about," the Russian president said.

The situation on the Korean Peninsula remains extremely tense due to Pyongyang's active development of nuclear and missile programs. In July, the DPRK tested ballistic missiles twice, and on August 29 and September 15, the country launched two missiles that flew over the territory of Japan. On September 3, North Korea conducted a successful hydrogen bomb test announcing that its explosive could be used for the warhead of an intercontinental ballistic missile.

South Korean authorities believe that the DPRK can make another provocative launch of its ballistic missiles on the anniversary of the founding of the ruling Labor Party of Korea, which is to be celebrated on October 10.