Putin sends message to the world through Megyn Kelly

In an interview with NBC News journalist Megyn Kelly, Russian President Vladimir Putin strongly rejected any possibility of Russia's interference both in US elections and in the domestic political life of the United States in general. Some of Putin's remarks were rather emotional, but the Russian president was not rude at all, even though US publications said the opposite. 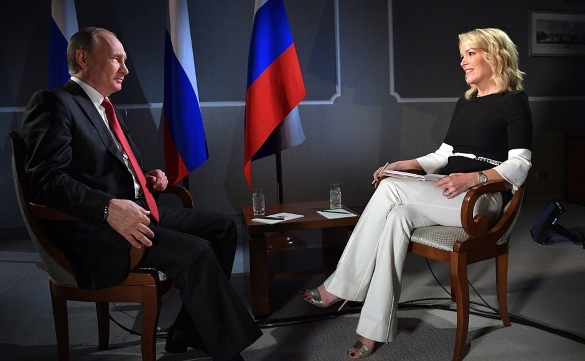 Kelly's interview with Vladimir Putin was released in her news program on NBC. Previously, Kelly worked on Fox News, until she quarreled with sitting US President Donald Trump. According to Kelly herself, the Russian president is more complex than the media are trying to portray him. From the conversation with him, she realized that Putin has his own approach to putting things in order in Russia. Having talked to residents of St. Petersburg, she concluded that Vladimir Putin indeed enjoys support among Russians. According to Kelly, 90 percent of Russians support Vladimir Putin.

During the plenary session on June 2, the Russian president had a robust discussion with the American journalist about at the alleged "Russian interference." Kelly's interview with Putin was devoted to the same subject almost entirely.

In particular, one of the questions was about the contacts of Russian Ambassador Sergei Kislyak with representatives of the Trump team. "I have no idea, I'm telling you quite frankly, I do not know. This is routine work of the ambassador. Do you think that ambassadors from all over the world, from the United States, give me every day reports about their meetings and discussions? This is nonsense. Do you understand what you are asking me or not?" Putin replied.

"It's amazing for me: you've made a sensation out of nothing and turned it into a tool to struggle against the sitting president. You know, you are very inventive people, well done, fellows. You are bored to live, apparently," Putin said.

Vladimir Putin responded negatively to questions about contacts with former US national security adviser Michael Flynn, Donald Trump's son-in-law Jared Kushner and other representatives of the US president's team.

The Washington Post, commenting on Vladimir Putin's answers to Megyn Kelly's questions during the SPIEF plenary session, wrote that Putin was rude to the US journalist. One can only try to imagine how the critics would behave if they were accused of one the same contrived doings for a year.

Senator Mark Warner, when answering a question about the "Russian trace" in American elections, answered: "The area that we're looking into as well ... there's a lot of smoke and we don't know if there's going to be anything there," Warner told CNN. The senator also found it strange that Russian hackers could generate and spread targeted fake news in certain states.

Chairman of the US Congressional Intelligence Committee Devin Nunes also released a statement about the absence of indisputable evidence of a collusion between Moscow and Donald Trump. "As of right now we have no credible evidence that there was any collusion between the Trump campaign and Russian government and if we found that I would run it over to the Department of Justice and ask for prosecution as soon as that happened," Nunes said, USA Today reports.

Back to the Putin-Kelly interview. In addition to questions related to US elections and ties with the Trump, the journalist asked Putin about corruption in Russia, killings of journalists and dissidents that may find themselves in prison.

Putin responded that Russia is developing on a democratic way. "We have opposition meetings here, and people have a right to express their points of view. If people violate law when expressing their opinions, then law-enforcement bodies try to establish law and order, of course. As for the opposition, let's remember the Occupy Wall Street movement, where is it now? Law enforcement agencies and special services of the United States have dismantled it. I am not trying to ask you how are things with democracy in the United States.  The electoral law is far from being perfect in the United States. Why do you consider yourself entitled to ask us such questions, do it on a permanent basis, and teach us how to live?" Putin said.

"We are ready to listen to our partners, we are ready to listen to assessments when it is being done in good faith, with the aim to establish contacts, create a unified atmosphere, serve for common values, but we absolutely do not accept it when such things are used as instruments of political struggle. I want everyone to know this. This is our message," President Putin said.