Is now the time when the West can destroy the Russian army?

US experts believe that Russia can not oppose anything to armies of Western countries. Of course, the Russian armed forces have some modern developments, but this changes little in practice. 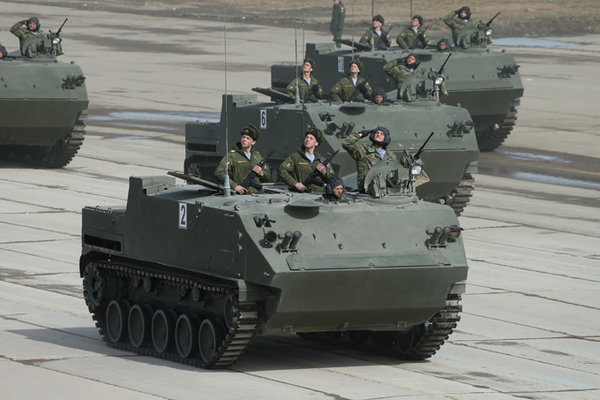 The Kremlin myth was dispersed by "Svoboda" radio station, which is what this station normally does to make a living. The report about the weakness of the Russian army was made following the Victory Parade from May 9. The radio invited expert of the American Foreign Policy Council Stephen Blank and ex-Pentagon employee, now a research fellow at CNA Corporation, Michael Kofman.

Mr. Blank, for example, has always remained opposed to Russia-US cooperation in Syria. He also believes that Russia works on an invasion of Ukraine. According to him, what the world could see during the V-Day parade in Moscow was a classic example of Soviet and Russian lies. He also thinks that the deployment of Iskander missile systems in the Kaliningrad region was a mafia move of intimidation, typical of mafia authorities.

Also read: What the Russian army can do to Ukraine in case of war

Mr. Blank then switched to John McCain's style of rhetoric and claimed that the USA should support its allies and give an adequate response, restore the production of medium-range missiles, because Russia allegedly violates a relevant treaty and so on. To crown it all, Stephen Blank predicted the imminent collapse of the Assad regime in Syria, because there is no one, but Russia who is ready to fight for it.

The comment by Michael Kofman was much more adequate. One can point out the following from what Mr. Kofman said:

2) Russia's Armata tanks are good, but making comparisons with the US Army is inappropriate, because Russia, due to its huge land border, has a need for such weapons, while the US has not. The US has the powerful navy and the air force, which Russia can not compete with. Yet, the main problem is the fact that Russia simply does not have money to produce modern tanks like the Armata;

3) high-precision weapons technology in Russia remain at a fairly primitive level. This is evidenced by Russia's attacks on Syria that often cause damage to the civilian population;

4) Generally speaking, in terms of the level of technological development, Russia lags 15-20 years behind the West, which means that Russia's current development is comparable to that of NATO's during the 1990s.

Of course, such exposure of "the Russian propaganda" is nothing but a propaganda move. Obviously, overcoming problems in the Russian army will take a long time: after all, now is not the time when most of the country's resources are used for the armed forces. Russia's defense budget is ten times smaller than that of the United States without taking into account similar budgets of America's NATO allies.

Interestingly, the above-mentioned comments draw a comparison between Russia and US arms systems. This brings up a question of whether Russia is doing that bad indeed: the two experts do not mention American allies, but prefer to talk about the military might of the United States.

It is worthy of note that President Putin commented on the issue of security in Eastern Europe in last year's interview with Bloomberg. "Look, I believe that all sensible people who are involved in real politics understand that references to threats posed by Russia to, let us say, the Baltic States are absolute nonsense. Do you think we are going to start a war with NATO? How many people are there in the NATO countries? About 600 million, right? Russia's population is 146 million. Yes, we are the largest nuclear power. But do you really think we are going to use nuclear weapons to take over the Baltics? Nonsense!" Putin said.

Regarding problems with high-precision weapons, regular strikes of the American coalition on civilians in Syria and Iraq suggest that the USA has a lot to work on in this direction. As for parades, Russia is not the only country that holds military parades, the prime goal of which is to demonstrate the military might of a state and showcase state-of-the-art achievements, if possible. As for cavalry against the tanks - this metaphor has nothing to do with reality. Plus, the relevant myth from WWII had long been dispersed.