The subject of Russia's isolation from the rest of the world remains all the rage in Western media. Journalists from a variety of Western publications do their best to try to make the phenomenon of "Russia's isolation" at least a little bit real in their articles. This week, just to follow the trend, Western media did not miss a chance to make their readers believe that the Victory Day Parade in Moscow was another sign of Russia's international isolation. 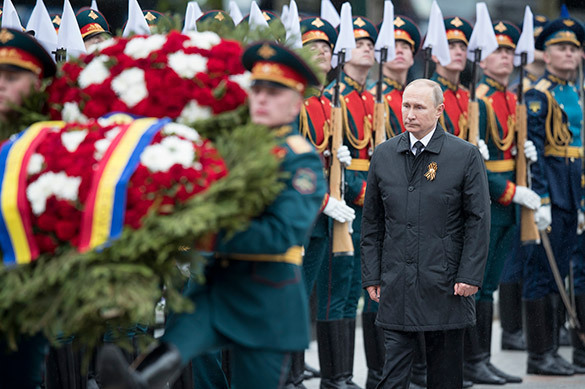 Neil MacFarquhar of The New York Times wrote, for example, that the Victory Parade in Moscow was "rather subdued" this year. The journalist paid attention to the absence of world leaders at the event, which, as he suggested, demonstrated Russia's isolation from the rest of the world. "The parade served as a reminder of just how isolated Russia has become," MacFarquhar wrote, adding that there was only one foreign leader present to watch the grand parade - Moldova's recently elected pro-Russian President Igor Dodon. "In past years, the annual parades have been attended by the leaders of China, Germany and the United States, among others," the author of the article said.

The author is not the first one who tries to convince his readers that Putin has gradually transformed Victory Day into Russia's most important holiday over 17 years of his rule. However, all those authors forget that this day has been incredibly important both for the USSR and present-day Russia for decades after the Great Patriotic War.

"The lessons of the past war call on us to be vigilant, and the Russian armed forces are ready to counter any potential aggression," Putin said after 10,000 servicemen and 114 units of military hardware rolled on Red Square to mark the 72nd anniversary since the end of the Great Patriotic War, in which the Soviet Union lost more than 20 million lives. During his speech, Putin said that Russia was ready to cooperate with the international community to effectively combat terrorism. However, there were no foreign leaders present at the event, thus suggesting that Russia's relations with the West remain extremely intense, primarily because of the crisis in Ukraine and Russia's alleged interference in the US presidential election.

As long as the author of the above-mentioned NYT article touched upon the Ukrainian crisis, he could not but quote Ukrainian President Petro Poroshenko, who claimed that Moscow uses the V-Day to mark its military interference in the Ukrainian conflict. Mr. MacFarquhar did not even try to cast doubts on Poroshenko's ridiculous statement.

Instead, he noted that "Russia celebrates Victory Day a day later than the rest of Europe" which "reflects tensions at the end of the war that have never quite receded."

As we can see, the West continues to speak dreamily about Russia's international isolation. Former US President Barack Obama considered "isolated Russia and "Russian economy in tatters" his own achievement. At first, the West started isolating Russia for "invading Ukraine and annexing the Crimea," then they isolate Russia for her firm stance on Syria.

The talks about Russia's isolation continued even after Donald Trump took office as US President. The list of his achievements during first 100 days as President included "Russia's isolation in the UN," which he allegedly achieved by means of successful diplomacy with Chinese leader Xi Jinping.