The appearance of Russia's state-of-the-art Armata tank at Victory Parade on May 9 in Moscow produced a bombshell effect. Indeed, the T-14 Armata has no analogue in the world. Moreover, Armata is the only tank to date that corresponds to the military principle of six zones. 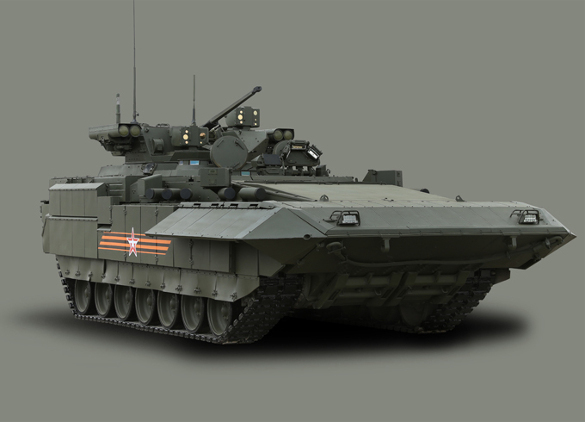 It is hardly an exaggeration to say that the impressive demonstration of new Russian tanks T-14 Armata produced quite an impression on both tank experts and common people. Why did the new tank get so much attention? The United States, England, France, even Greece, Turkey, Australia and South Korea have their tanks. Nevertheless, all of those countries evinced great interest in the latest Russian Armata tank. Why is that?

To begin with, new tanks do not appear very often. All latest variants of US Abrams, German Leopard and Israeli Merkava tanks are only modernized and modified versions of old models with new serial numbers and minor improvements. The gun, the engine, the armor and the chassis - all these major elements of the machine remain unchanged. A new version of the Leopard tank received a longer gun, but there were no principle changes made to the model.

The Japanese produced their new tank called Type 10, but it was also, in fact, in-depth modernization of the previous model.

The current state of affairs in the Russian economy is far from being perfect. The Russian defense industry still suffers from consequences of the dashing 1990s, the crisis of 2008 that developed smoothly into the crisis of 2014, the devaluation of the ruble, from sanctions and "junk rating". Suddenly, out of nowhere, new tanks with an unprecedented level of perfection appear.

Nowadays, a tank has far more enemies than it used to have during the Second World War. The experience of local military conflicts of recent decades allowed to create a theory, according to which a modern tank should meet several highly important requirements - so-called "six zones" principle.

The first of the six zones is called "avoid a collision." That is, tanks should avoid collision with a more powerful enemy and destroy a weaker enemy on a battlefield.

The T-14 Armata is equipped with a radar, the detection range of which reaches 100 km. The radar detects all types of approaching ammo and destroys them in an automatic mode. The idea is not new, but with T-14, it has been implemented to the maximum.

The second zone is called "avoid detection." A modern tank must be hard to detect. All signatures coming from the tank must be reduced to safe limits. Here it comes: the tower without a crew of the T-14 Armata is smaller than the towers of tanks of all other countries.

The tower of the US Abrams tank accommodates three crew members. This is a whole house, not a tank. How can it be disguised?

The third zone - "avoid target acquisition." All future tanks must be equipped with systems producing active interference. In short, a modern tank, like a plane, should  have its own means of electronic warfare.

"Avoid hit" is the fourth zone that is about an "umbrella" that needs to cover the machine from all directions. Before destroying a missile that flies in the direction of a tank, one should at first detect the missile and bring the gun onto the moving target. Most likely, the T-14 is outfitted with such a system.

The fifth zone is called "avoid penetration." If a shell hits the tank, it must never break its armor. A look at armor shields that protect the body of the T-14 Armata means that the tank has such a solution.

Finally, the last zone is called "avoid destruction." If a shell breaks the tank's armor, crew members must stay alive. In the T-14 Armata tank, all three members of the crew are accommodated inside a special armored capsule.

Russia's new Armata tank is the tank of six zones that all other tanks will find very difficult to cope with, especially if Armata is supported with new infantry combat vehicles armed with four systems to launch anti-tank guided missiles.

Finally, the 60-ton tank has a 1,500 hp engine. The power-weight ratio of the new tank is 25 hp per one ton of weight, which is a very good indicator. The tank develops the speed of 70 km/h.

Russia never stops surprising our Western partners. The country that created the legendary T-34 tank has now built the tank of six zones, which is just natural progress - simple as that.