Whom does Rex Tillerson represent in Moscow?

Rex Tillerson, the head of the US State Department,  arrived in Moscow for an official visit. Tillerson arrived in Russia during a critical moment. Tensions remain extremely high in many parts of the world - in Syria, on the Korean Peninsula, in the Balkans, in the Middle East. The situation continues going out of control because of the unpredictability of the new American administration. 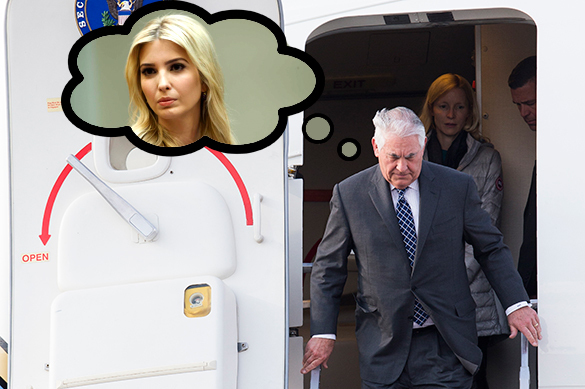 Before Donald Trump moved into the White House, the world knew him as a strong, persistent and successful businessman, who could overcome most difficult problems. Trump was predictable as a business man. He was in place.

Everyone knew how Trump was making money, but no one knew what kind of president he would be. He took absolute advantage of his unpredictability in politics. He was creating his style on the basis of promises that were clear to everyone. Trump was promising something new. What we can see today is some sort of gibberish, and there is no clear logic behind it.

This could probably design the rumour about Trump's subordination to the Kremlin. Donald Trump as president was portrayed as a person who lacks independence.

However, everyone was expecting that the actions of President Trump would reveal the inner logic of his strategy. The White House has known individuals before who suffered from shortcomings in logical thinking and had severe problems in expressing their thoughts. Remember George W. Bush?Sometimes, one had to wait for practical action to take place in order to understand what he was saying.

Yet, Trump's actions have turned out to be just as unpredictable, obscure and illogical as his words. He struck a missile blow on Syria without requesting permission from Congress, even though he previously assured the world that America would not interfere in Syrian affairs, especially without a sanction from US lawmakers. A few days before the missile attack, he said that he had inherited a mess from Barack Obama. No one would expect that Trump would look into the mess in such a way.

Curiously, Trump has demonstrated the lack of independence in his first major international step. This time, it was not Russian President Putin, who was supervising Donald Trump, but his daughter Ivanka. It was her emotional reaction to photos from the site of the chemical attack in Syria that pushed Donald Trump to attack Syria.
Does it look like mess? It does.

This brings up a question of whom Rex Tillerson represents in Moscow. If Tillerson comes to an agreement with something in Russia, how unpredictable will the reaction in the White House be? Maybe Russia should have invited Ivanka Trump to the Kremlin instead of Rex Tillerson.