Can Ukraine take the Crimea from Russia? Will The Hague help?

Ukrainian Foreign Ministry reported that Ukraine filed a lawsuit against Russia at the International Court of Justice. Kiev intends to "hold Russia accountable for committing acts of terrorism and discrimination during its illegal aggression against Ukraine." 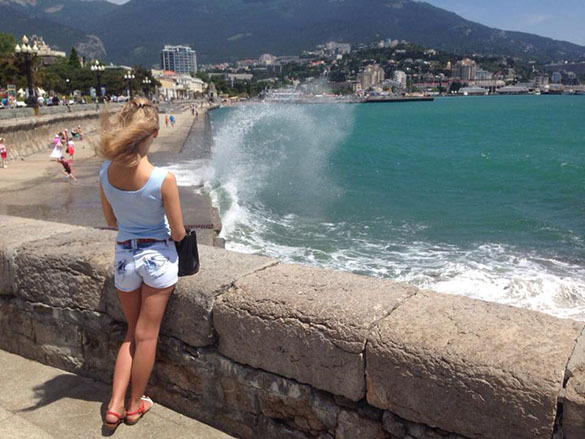 As usual, Kiev insists that Moscow "provides weapons and other forms of assistance to illegal armed groups," which, according to the Ukrainian authorities, have committed "a series of acts of terrorism."

According to Kiev authorities, those terrorist acts include the crash of the Malaysian passenger Boeing, the shelling of residential areas of Mariupol and Kramatorsk, the destruction of a civilian passenger bus near Volnovakha, a deadly explosion during a peaceful rally in Kharkov."

In addition, the document claims that Moscow violated the Convention on the Elimination of All Forms of Racial Discrimination. According to the Ukrainian authorities, this is manifested in the  campaign for the discrimination of "non-Russian communities" in the Crimea - ethnic Ukrainians and Crimean Tatars. For example, Kiev officials say that the teaching of Ukrainian and Crimean Tatar languages was restricted in the Crimea.

To crown it all, President of Ukraine Petro Poroshenko accused Russia (what a shocker!) of the illegal annexation of the Crimea, discrimination on the peninsula, the occupation of the territory of the Donetsk and Luhansk regions and numerous terrorist attacks. To top it off, Poroshenko accused Russia of the confiscation of Ukrainian property and infliction of environmental damage."

For the time being, it remains unknown whether the UN accepts the claim for consideration, as most of Kiev's accusations against Moscow do not withstand any criticism.

In January 2015, President of Ukraine Petro Poroshenko arrived at the World Economic Forum in Davos with a piece of metal. According to Poroshenko, it was a piece of panelling of the bus that came under fire on January 13 of the same year near the settlement of Volnovakha.

Twelve people were killed in the tragedy, 18 others were injured. Kiev categorised the attack as a terrorist act and claimed that the traces on the fragment of the bus were left by a Russian missile.

No evidence had been presented to prove the involvement of militia fighters in the incident. The driver of the passenger bus said that it was a fragmentation mine, rather than a missile, that caused the explosion. He also said that if it had been a missile, then no one would have survived.

As for the crash of the Malaysian Boeing over the Donetsk region, the investigation of the case still continues. The joint investigation team (JIT), headed by the Netherlands, presented preliminary results of the criminal investigation without even studying the data from Russia. As a result, the number of questions about the MH17 crash has only increased.

Investigators from the Netherlands, Belgium, Ukraine, Malaysia and Australia claim that they established the type of weapon that struck the aircraft. According to them, it was a 9M38 missile launched by anti-aircraft missile system Buk. The missile was launched from the area of the village of Pervomaiskoye, which, as the investigators say, was controlled by militia fighters.

"This is another of completely worthless and unprofessional versions of investigation of the terrible tragedy that killed 298 innocent people. All this is a part of information warfare. The investigation continues for there years already, and all the analyses are conducted with gross violations of international aviation regulations. It took them two years to establish that it was a Buk system that shot down the aircraft," President of "Civil Aviation Partner," Honored Pilot of the USSR, Oleg Smirnov, told Pravda.Ru.

According to him, the main culprit of the disaster is Ukraine. "In violation of absolutely rigid and  unambiguous requirements to close airspace for civil aircraft over the area of hostilities, Ukraine ignored international aviation rules," he added.

In September of 2016, Ukraine filed a lawsuit against Russia - in connection with the alleged violation of the Convention on Law of the Sea. Ukraine accused Russia of violating the rights of Ukraine "for natural resources in the waters of the Black and Azov Seas." Has anyone heard about the process on the case and consequences for Russia? Can anyone imagine that the UN Security Council may decide to deploy troops on Russia's territory - the Crimea - to meet Ukraine's requirements?