How Ukraine lost the Crimea forever

Another bombshell has appeared on the Internet: the transcript of the meeting of Ukraine's National Security Council from 28 February 2014, when the Crimea started talking about separating from the "crazed power" in Kiev. 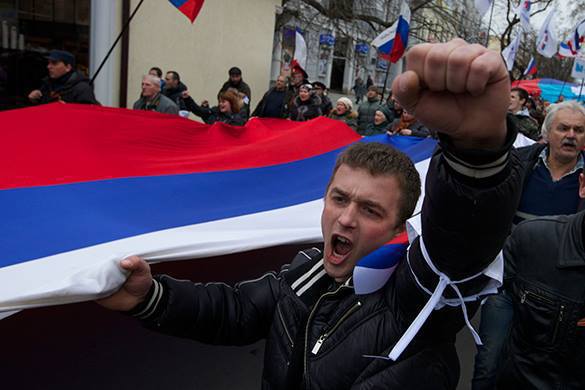 On February 27, 2014, Crimean MPs voted in favor of holding a referendum in the peninsula "for the status and powers" of the region. The Presidium of the Crimean Parliament assessed the situation in Ukraine as "the unconstitutional seizure of power by radical nationalists supported by armed criminal groups" and "assumed full responsibility for the fate of the Crimea." The referendum was devoted to the following question: "The Autonomous Republic of Crimea has state autonomy and is a part of Ukraine on the basis of treaties and agreements (for or against)."

Ukrainian officials gathered for the meeting to discuss what to do with the Crimea next. As long as the meeting was held behind closed doors, the participants of the meeting were free in their emotions and expressions. This is the main reason that makes the "historical document" so interesting. The document was exposed by Maidan activist Borislav Bereza.

The first thing that catches attention in the document is the fact that all members of the closed meeting were well aware of the state of affairs in the Ukrainian army - the army was absolutely not ready for any combat actions. Everyone understood that Ukraine was incapable of waging war against Russia. This was said by Arsen Avakov, who headed the Ministry for Internal Affairs of Ukraine, Vitali Nalyvaychenko, the head of the Security Service of Ukraine, then-President Alexander Turchynov, Defense Minister Igor Tenyukh and Arseniy Yatsenyuk.

"If we had at least one chance in a hundred to win the war, I would have been the first to support active actions," Yulia Tymoshenko told the meeting. The participants of the meeting realized both the likely outcome of the conflict and the level of anti-Ukrainian and pro-Russian sentiment in the Crimea at the time. "I am stressing this out that the majority of the Crimean population takes a pro-Russian and anti-Ukrainian position," Arsen Avakov said at the secret meeting.

Ukraine's Attorney General Yarema explained this situation in a very simple way:  the protests in the Crimea occurred because of the actions of Maidan gunmen.

The transcript comes contrary to Ukraine's propaganda about the violent seizure of the Crimea by the Russian Federation. The people, who started this propaganda, knew very well that the people of the Crimea despised the post-Maidan Ukraine.

Interestingly, the participants of the secret meeting mention their "advisors" from abroad, particularly from the USA and Germany. It appears that the people, who attended that meeting, were worshiping every word they could hear from their foreign advisors. To start a war or not, to declare martial law or not, what to do with this or that region of the country - everything was decided with the participation of "foreign advisors." One shall assume that the situation in Ukraine has not changed since 2014 at this point. The real government of today's Ukraine is not in Kiev.

Then President Turchynov was the only person, who voted for declaring martial law in Ukraine to launch aggressive actions against the Crimea. He was absolutely deaf to hear words of reason that some members of the meeting would say at times. Turchynov was the only one, who voted for his now proposal, while all other members of the meeting, including Yulia Tymoshenko, tried to explain to the "bloody pastor" that the war against the Crimea would be the end for Ukraine. Interestingly, Turchynov is known as the Ukrainian version of John McCain.

"We need complete mobilization of the country, - said Turchynov. - We must redeploy all of our available forces from the center and the west to the east and the south!" Yulia Tymoshenko responded to him: "You can't even imagine what will be happening in the country, if tanks and armored personnel carriers start traveling  around city streets. People will start fleeing the country, problems with food and fuel will occur." Yet, Turchynov did not listen: "There will be even more panic, if Russian tanks appear on Kreshchatik. We must do everything to be able to defend ourselves, including on our own, until help arrives from the West," Turchynov responds to Tymoshenko.

During the meeting, Alexander Turchynov received a phone call from the chairman of the Russian Parliament Sergei Naryshkin. "He said that Putin told him that if at least one Russian citizen is killed, they would declare us war criminals and would chase us all over the world." It appears that the group of Ukrainian political impostors perceived those words as a threat.