It is no secret that the United States uses a variety of levers to control social and political life of other countries of the world. Financial support for civil societies of the countries, which the US establishment chose as a zone of strategic interests, is one of those tools. 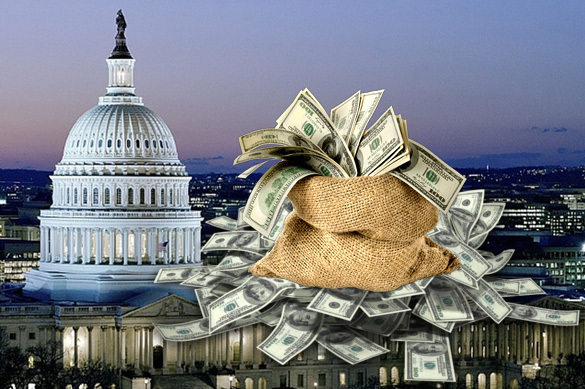 The USA's financial assistance for the "support of democratic foundations of the world," gives the US an opportunity to penetrate into the countries of Europe and Asia. It is not surprising that Russia appears to be a priority objective for the US State Department, as evidenced by the annual financial report from the department.

In 2016, the US State Department, which performs the function of the Ministry for Foreign Affairs, has taken on Russia for the first time in five years. The annual financial report from the US State Department includes Russia on the top ten list of the countries, where the USA sends impressive amounts of money for different types of subversive activities that include propaganda. Noteworthy, the report reflects financial investment on the line of embassies.

According to the US State Department, the mission of the United States is to build a prosperous, just and democratic world, as well as to maintain acceptable conditions for stability and progress to the benefit of the American people and people around the world.

The United States will be better prepared for challenges of tomorrow by investing in common security and prosperity. Every year, the US State Department allocates about 585 million dollars for the sake of world democracy and stability. As it turns out, a significant part of this money was used for building democracy in Russia.

The fact that Russia has been included in the top ten countries, in which the State Department supports "democracy," may mean that Washington is ready to "conduct a dialogue" with Russia, even though the top political leadership of the United States has referred to Russia before as an "isolated country," whose economy was "in tatters."

In last year's report, Russia was mentioned only once, in conjunction with the Islamic State.

In 2016, Russia was ranked sixth among the countries that attract most of Washington's attention. This year, America generously spent $80 million on the "aggressor." Most of this spending goes for the information war that determines scenarios of mutual relations between countries, especially with Russia.

In turn, Russia tries to show resistance to this information war by promoting her own agenda, and helping to create a more open global media environment, in which giant American multinational media conglomerates do not have their last say.

The top three of the countries surprisingly includes the United Kingdom ($176 million), Pakistan ($123 million) and Afghanistan ($113 million). These countries have been taking the lead in the race for US dollars for the third consecutive year.

At the same time, as the report says, neither Ukraine nor Georgia have received any support from Uncle Sam for their democracies. It appears that Washington has decided not to invest in its hopeless projects.

For the United States, Russia is a sort of "unbridled horse" or rather a bear. The Americans have a very low level of expert knowledge of the processes that currently happen in Russia. The hostile policy of the USA towards Russia has led to the isolation of the academic community.

As it turned out, the US State Department does not have any specialists on Russia and Eastern Europe, especially after the collapse of the USSR. The United States has successfully established control over the Baltic states and former Warsaw Pact States. Yet, Russia responds with a balanced and pragmatic approach based on the supremacy of economic interests and respect for the sovereignty of other countries. This approach brings positive results and makes Western geopolitical rivals nervous.

It goes without saying that the USA does not invest in Russia for nothing. The investments are meant to strengthen the US pressure on the country.

"It is important for America to understand where to approach Russia from and where Russia has its weak points. Once they know the weak point, they can dictate certain policy and carry out national interests," Sergey Sudakov, an Americanist said.

The USA is ready to incur any financial costs for the destruction of Russia's "traditional values." However, unlike in Washington-controlled countries, Russia is ruled by strong and self-sufficient leader, who makes the above-mentioned efforts of the US State Department pointless.