Prerequisites for the new Warsaw Pact have come to fruition. This could be the only way for Russia to stop the insatiable desire of Washington to unleash a war in Europe. Does Russia have power, means and political will to do that? Will anyone be willing to join the new defensive alliance? 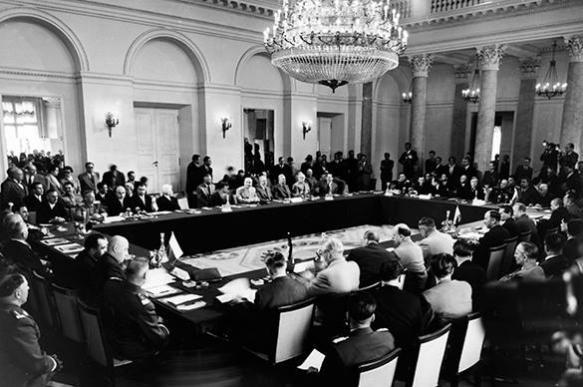 Russia's reunification with Crimea was our response to Ukraine's steps towards NATO, which would have entailed catastrophic losses for Russia's influence in the Mediterranean. The "Crimean Spring" caused a fit of Russophobia in the West; the rhetoric from the West was very much reminiscent of the times of the Cold War.

The events in Yugoslavia, South Ossetia and then in Ukraine suggest that the West will not rest until the Orthodox world, led by Russia, is destroyed. Today, the goal is to break nuclear parity between Russia and the United States. Yet, nuclear parity is  the only shield that contains Washington's military lust.

In 2012, NATO created the so-called "Chicago Triad" - a system that united nuclear missile, missile and conventional weapons. This triad refers to forward-based weapons, and the United States "unobtrusively" has been moving this system towards Russian borders along with tactical nuclear forces and rapid reaction forces.

This is not it. Washington has been creating an ABM system in Europe (Romania and Poland). In a few years, the global missile defense system will be able to shoot down all the ballistic missiles of Russia's retaliatory strike.

The military pressure is accompanied by the pressure of sanctions. In a nutshell, we can see the situation of the 1950s, when the defensive Warsaw Pact was created in response to the establishment of the North Atlantic Alliance. Back then,  the final straw was Germany's entry into the alliance; nowadays, there is the US global missile defense system.

Against such a background, Russia needs a new Warsaw Pact to have a legitimate right for military presence in Europe. Like in the past century, it will help stabilize the situation. The existing defensive structure - Collective Security Treaty Organization (CSTO) - is not suitable as the basis for a new military contract. Belarus is not ready for joint action: this is evidenced by its rejection to deploy a Russian air base in Lida.

The new Warsaw Pact: Can Russia do it?

Who in Europe is ready to enter into a new military project? Russia has already lost the Orthodox Georgia, Ukraine, Serbia, Bulgaria and Romania. Is there anyone else? The answer to this question appears to be negative. To find candidates, Russia needs to offer an economic project that would be more attractive than the European Union. The CMEA (Council for Mutual Economic Assistance) used to be as such.

Vladimir Putin attempted to create one single space from Lisbon to Vladivostok, but the attempt failed because the Russian economy is not sovereign, unstable and oil-dependent. In a few years, we, the Russians, will face the question: either we live in an economically developed country or disappear.

Russia can try to do something already. Russia may support not only official governments of Europe, but also European opposition. In the Italian region of Veneto, for example, the Legislative Assembly adopted a resolution calling the EU to recognize the Crimea a Russian territory and lift sanctions against Russia.

Supporting the National Front of Marine Le Pen in France is also the right move. Russia needs anti-American politicians in Western Europe like air. Russia needs the fragmented Europe as no one has repealed the postulate: "Divide and conquer."

Additionally, Russia could grow loyal politicians at its universities and support homegrown ones, who make their first steps in the political arena in Eastern Europe. It goes about such figures as chairman of the Polish Party "Change" Mateusz Piskorski, who was arrested for "spying for Russia." From this perspective, pro-Russian Serbian parties ("Doors" and others) exploded in social networks, when a delegation of Russian senators led by Konstantin Kosachev had meetings with pro-Western leaders prior to the parliamentary elections in Serbia in April.

Russia must also activate the works of its special services as far as color revolutions are concerned. An eye for an eye that is. If Russia can shake Europe a little bit, Europe will be too busy with its own problems.

In many European countries, people are already dissatisfied with "belt-tightening" actions of their governments. France rebels against the new labor law that strikes out all social gains of previous generations. Greece, Portugal and Spain are standing on the verge of new shocks. The refugee crisis plays into Russia's hands as well.

Change is coming to the United States too. Barack Obama said that he could, but it turns out six years later that he could not do a thing. People like Trump and Sanders do not come out of nowhere. America will see social, racial and economic shocks.

"In Eastern Europe, there are no countries that would be willing to cooperate with Russia in the defense field, - Leonid Ivashov, President of the International Center for Geopolitical Analysis told Pravda.Ru. - The Americans have all by the throat. Russia needs to strengthen its military might in the first place. Secondly, Russia must create joint defense space with Belarus. We should also work in the Balkans, especially in Serbia and Bulgaria. We also must create a group of high-precision cruise missiles based within reach of the United States. In this way, Russia will be able to neutralize the US anti-missile defense. When the Americans feel threatened as it was in 1962 (the Cuban Missile Crisis), they will be the first to offer to sit down to negotiate."