Russian FM Lavrov: There are no prerequisites for new Cold War to erupt

Russian Foreign Minister Sergei Lavrov made a number of important statements during his meeting with students of the Moscow State Institute of Foreign Relations (known for the Russian initials as MGIMO). Lavrov spoke about Russia's foreign policies, the state of affairs in Ukraine, the elections in the USA and many other issues. 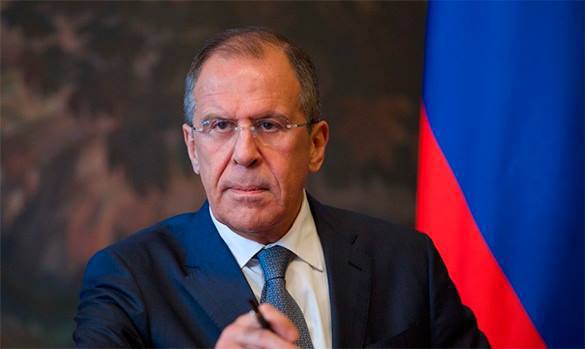 Sergei Lavrov said that Russia was working on an updated version of the concept of foreign policies of the state, although he did not specify any details.

"We report all the updates of the Russian foreign policy concept to the president, taking into account the events that have been developing recently. I am convinced that we should not change the key directions that President Vladimir Putin set back in 2000. They envisage a multi-vector policy, openness to cooperation with all those who are ready for it on an equitable basis, taking into account interests of the partners, but above all, they envisage the non-confrontational, albeit firm defense of our own interests," Foreign Minister Sergei Lavrov said.

"No one has turned their backs on Russia. Eighty percent of the world's population live in the countries that share our views and want justice in world affairs. Any talks about any sort of isolation are ridiculous," Lavrov said.

As for the topic of the anti-Russian sanctions, Sergei Lavrov said that it was "Western countries,  the United States in the first place, that used the support of aggressive minority in the European Union and literally forced Europe to follow the same path," and the forced Australia, Japan and several other countries to do the same.

As for the Ukrainian crisis, Sergei Lavrov said: "The situation in Ukraine is very difficult. The crisis in that country has triggered the processes that have exposed the imperfection of security structures in Europe and in the Euro-Atlantic region on the whole. They have exposed systemic flaws of the structure, which could not be reformed for many years despite all the suggestions that we had made."

Regarding the Crimea and the reaction of the West, Sergei Lavrov said: "Why should they (Western countries that imposed sanctions against the Russian Federation) eat their heart out about what is happening in Syria? Why did they have to act so after the organizers of the armed anti-constitutional coup seized power in the country and wanted to force the Crimeans live in that country too?" Lavrov wondered.

"There is no legal problem with the recognition of Crimea's reunification with Russia by Western partners," said the Minister. "There is an obvious political will to use this situation to match the line of policies the the West had been conducting under the leadership of the United States for a long time, long before the crisis in Ukraine had erupted. It goes about the containment of the Russian Federation," Lavrov said. He also pointed out the fact that the reunification of the Crimea with Russia was conducted in full accordance with international law.

"We were guided by these principles in our response to the Syrian government that had sent us a request to deploy the contingent of Russian Air Force in Syria to combat the Islamic State, Jabhat en-Nusra (organizations are banned in Russia) or whatever they are called. Simultaneously, we  solve very important tasks to facilitate the humanitarian situation of the Syrian population, especially in terrorist-controlled regions," Sergei Lavrov said.

According to the Russian Foreign Minister, there are no prerequisites for a new Cold War to start. Russia and the US share common democratic principles, and it is hard to compare the middle of the last century with present times.

"I do not see any prerequisites to the second edition of the Cold War to become a reality," Lavrov said during the meeting with MGIMO students.

He admitted that it was "very difficult" to compare the situation of the last century with the present time, because these situations differ from each other fundamentally.

According to Lavrov, in contrast to the era of ideological differences, Russia and the US have common principles that the parties share within the framework of the OSCE and the UN. These principles, the minister added, "suggest a democratic development of societies."