Putin warns those who want to try Russia's strength 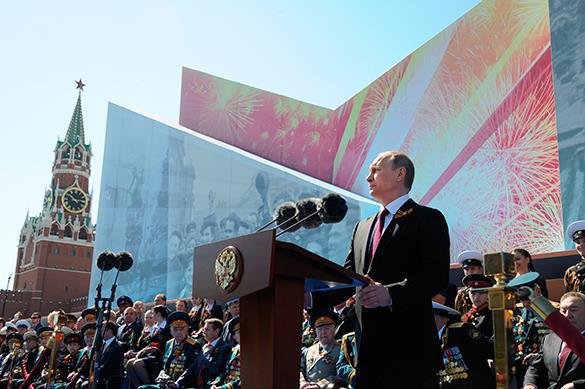 "Victories stand for everything best, worthy and heroic in our nation. Victory is our pride and willingness to defend the interests of the country. Victory is a formidable warning to those who want to try our strength," said Putin.

"Let me propose a toast to the heroic generation of victors, for Russia, for our great Victory," Putin addressed the participants of the meeting in the Kremlin on May 9th.

"The defeat of Nazism will never be plain history for us. This is the legacy of generations, present and future ones," the Russian president said.

Every veteran contributed to the Great Victory, and all the grandeur of national heroism was reflected in the fates of the those who took part in the war. "The war tempered your character, and Victory inspired you for new achievements. You could rebuild factories and agriculture within the shortest period of time possible. You could achieve new highs in the development of science, culture and art. Your deeds and actions, your ability to value life, cherish friendship, family and home will always be an example for us," Putin said addressing war veterans and home front workers.

Putin makes Middle East turn its back on USA

Israeli Prime Minister Benjamin Netanyahu has already visited Moscow. King of Saudi Arabia Salman is expected to visit Moscow in the near future. Presidents of Egypt and other Middle Eastern leaders have repeatedly visited Russia to meet Putin. At the same time, none of them is looking for military help from the United States.

According to the publication, Russia has demonstrated its readiness to affect the balance of forces in the region, while the US has not. The author of the article, Dennis Ross, noted that Putin's worldview comes into absolute contract with the worldview of US President Obama.

According to him, Obama believes that the use of force can be justifiable only if the security of the United States is at stake. This is a reflection of the lessons that the American president has learned from the wars in Iraq and Afghanistan. This may also explain why Obama did not want to take decisive actions in Syria at a time when the war triggered a humanitarian catastrophe in the region.

Nevertheless, the use of force remains most effective to achieve political goals in the Middle East, the writer said. For this reason, Saudi Arabia launched military actions in Yemen fearing that the USA will not be willing to limit the expansion of Iran's influence in the region.

Russia's military intervention has changed the balance of power in Syria, and, in contrast to Obama, put the Russians in a stronger position without asking for any serious investment. As a result, it is President Obama, who now calls Putin and asks for his help in putting pressure on Syrian President Bashar Assad.

The leaders of the Middle East acknowledge this as well. They admit that they need to talk to Russia, if they want to protect their interests.

"This does not mean that we are weak and Russia is strong. Objectively, Russia is declining economically and low oil prices spell increasing financial troubles-a fact that may explain, at least in part, Putin's desire to play up Russia's role on the world stage and his exercise of power in the Middle East. But Obama's recent trip to Saudi Arabia did not alter the perception of American weakness and our reluctance to affect the balance of power in the region," the article says.

As long as the Middle East questions America's reliability, Russia will remain the key player in the region, concludes the author.