Russia and Ukraine: Compassion vs. hatred

The more news reports we hear from Ukraine about anti-Russian hysteria, the more strange it appears to deal with the opposite attitude to Ukrainians on Russia's part. For example, when Ukraine destroys and renames everything that is at least somehow related to the USSR and Russia, Russia opens a monument to one of the ideologists of Ukrainian independence, poet Shevchenko, in Novosibirsk. 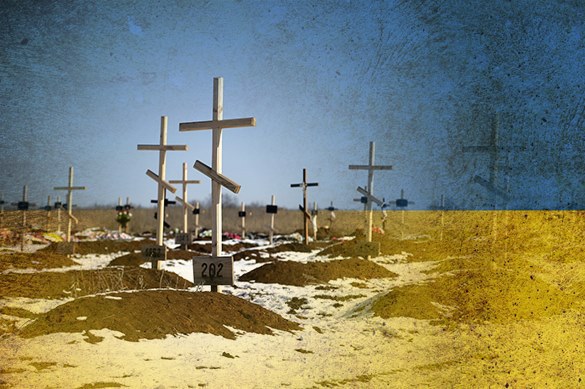 In Ukraine, they ban Russian films and sack those, who congratulate other people on the Day of the Defender of the Fatherland (aka Red Army Day - ed.). In Russia, there is a whole network of popular Ukrainian restaurants called "Taras Bulba Tavern." If a Russian citizen supports the Ukrainian revolution, they can freely express their opinion on the subject without fearing any sort of retaliation for their words.

The presence of many millions of Ukrainian guest workers in Russia is yet another evidence to prove Russia's quite friendly attitude to her neighbors. At the same time, the above-mentioned facts could serve as a seemingly ideal "target" for the righteous wrath of Russian patriots for the crimes of the Nazi regime in Kiev against the Russian-speaking population of the south-east of Ukraine. Indeed, even if a Ukrainian has a very good knowledge of Russian, they can easily be identified as nationals of Ukraine for their specific Ukrainian accent that Ukrainian visitors do not even notice. However, the Russians do not insult Ukrainian guest workers, nor do they want them to go home.

It is not only natives of the Donbas who want to come to Russia in an attempt to find better lives and higher salaries (compared to tiny salaries in the "great European power"). The number of Ukrainians coming to Russia from central and even western territories of Ukraine is a lot larger, even though those territories can hardly be referred to as "Russia-friendly."

Finding work is not the only reason, for which those Ukrainians go to Russia. Another reason is to avoid army service. Many Ukrainians hide under the wings of the "Russian aggressor" as soon as they smell army boots on their doorstep. Finally, there are Ukrainians who miss normal everyday life - they go to Russia too to strike the recent two years out of their past.

In fact, this is a typical picture for the entire period of Russian-Ukrainian relations. Hetman of the Right Bank Doroshenko, killed many Moscow-friendly Cossacks from the West Bank and eventually surrendered to Russian troops. He was neither dismembered nor impaled, even though those were typical executions that he resorted to to kill his enemies. Surprisingly, Doroshenko was appointed a commander in the Russian city of Vyatka. He is also known as the great-great grandfather of the great Russian poet Alexander Pushkin (on the female line).

Why do Ukrainians escape to Russia?

What about the "fashion" for Zaporozhye Cossack traditions among the nobility of the Russian Empire in the XVIII century? The all-powerful favorite of Catherine the Great, His Serene Highness Prince Potemkin-Tavrichesky was known for his Cossack nickname as Gritsko Neches.

It is worthy of note that the founder of Novorossiya (New Russia) was bearing the title of a Zaporozhye Ataman even after the elimination of Zaporizhian Sech. The elimination of the camp of Zaporozhye Cossacks was peaceful. All the surrendered Cossacks, with the exception of a handful of elders, were released. They were even allowed to join the Russian Army.

As we can see, the generosity of the Russian people towards their neighbors is an irrefutable fact. The fundamental basis for this phenomenon is something that one may call the "bright imperial idea," when a powerful state does not strive to enslave others, but protects them from external enemies instead.

This was the case of Ukraine since the very beginning of its existence. In the XVII century, its Left Bank part was enjoying peace and stability under the Russian patronage (as far as it was possible at all in the vicinity of the predatory Crimean Khanate that would constantly attack the Russian land). The Right Bank part of the land was known as the Ruin during the same period of time -  even anti-Russian Ukrainian historians acknowledge so. The population of the Right Bank region decreased by ten times in 30 years. Such a dramatic decrease in population did not occur because of the Ottoman Empire, Rzeczpospolita or the Crimean Khanate. It became possible because of its own hetman and their destructive bloody civil wars.

As history repeats itself, we can see a similar situation unfolding before our very eyes in today's Ukraine. We can see that every Ukrainian oligarch has his own army under the guise of "voluntary", "territorial" and other types of battalions, let alone criminal gangs, such as the Right Sector and the like.

Ukrainian nationalists are unable to curb their ego that starts to devour both the state and the society from within. The zeal, with which politicians of Maidan embezzle the Ukrainian treasury,  surprises even their Western patrons, who thought that they were accustomed to the level of Ukrainian corruption.

They do not seem to understand that selfishness and hatred are inherently destructive. We can see the independent Ukrainian state destroying itself for the third time in history. Creation and development requires different qualities - altruism, love for others and self-sacrifice.

Therefore, there is nothing surprising about the fact that the Russians treat their "we-will-never-be-brothers" with love and care, albeit with a dash of pity. This is a typical attitude to a seriously ill relative, who stubbornly refuses to be treated and gets offended by those who offer this treatment.