The individuals, whose names appear in the WADA report as direct executors, will be suspended from their posts pending investigation, said President Vladimir Putin. 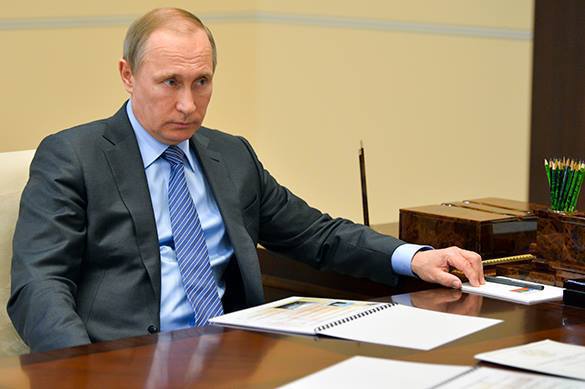 According to the Russian president, the uneasy atmosphere that has developed around international sports and the Olympic movement brings up the situation from the early 1980s, when many Western countries staged a boycott of the Moscow Olympics against the background of the USSR's military operation in Afghanistan. The Soviet Union then boycotted the Games in Los Angeles.

"As a result, many Soviet and American athletes, athletes from other countries involved in the campaign of mutual boycotts, lost the opportunity to write their names into the history of world sports and wasted years of hard training. In short, those people had had their lives broken - they had become hostages to the political confrontation," Vladimir Putin said.

Today, Putin continued, politics intervenes in the world of sport again. The Olympic movement, which plays a huge role in uniting mankind, may once again find itself on the verge of a split. Today, doping scandals are in full swing, and the sanctions against the athletes who did use doping drugs, affect the "clean" athletes too.

In the past six months, all Russian athletes were tested for anti-doping in accordance with WADA recommendations under the control of the British Anti-Doping Agency, as well as at foreign anti-doping laboratories, the head of state reminded.

"The accusations against Russian athletes are based on the testimony from one man, a man of scandalous reputation. A criminal case was filed against him in 2012 on violations of the anti-doping legislation, however, the evidence collected at the time was insufficient, and the case was dismissed. On June 17, 2016, in connection with his statement about the manipulations of illegal drugs and extortion reports from Russian athletes, the criminal case against him was resumed on newly discovered circumstances. One of his close relatives, who previously worked under his leadership, had already been convicted of trafficking anabolic steroids in Russia. A question arises: can the conclusions based solely on the testimony from such people be credible?" Putin said.

WADA ganging up on Russia

The US Anti-Doping Agency (USADA) joined efforts with several other similar agencies from other countries and attempted to create a negative information background without waiting for an official announcement of the report from the committee of the World Anti-Doping Agency. Those agencies were quick to call to suspend team Russia from the Summer Olympic Games in Rio de Janeiro.

"The officials named in the report from the committee as direct executors will be suspended from office pending investigation. However, in order to make a final decision on the responsibility of those individuals, we request the WADA committee to provide more complete, objective, evidence-based information to use it in the investigation of Russian law enforcement and investigative agencies, whose work, without a doubt, will be brought to an end, and comprehensive measures will be subsequently taken to prevent violations of Russian legislation and our country's international obligations," President Putin said.

Based on the report by Richard McLaren, the head of the World Anti-Doping Agency said that the Russian Anti-Doping Agency (RUSADA) would not resume its work until the minister for sport and other officials were dismissed from their positions.

McLaren said that Russian Sports Minister Mutko knew about doping samples manipulation and showed direct influence to replace them during the Olympic Winter Games 2014 in Sochi. The report also contains similar accusations against the Russian Federal Security Bureau, but provides no evidence to prove that.

The so-called "independent investigation" under the direction of Canadian law professor Richard McLaren is based on the testimony from former director of Moscow's anti-doping laboratory, Grigory Rodchenkov, who left to the United States after he was dismissed from his post. In the USA, he gave a series of interviews, in which he told of the replacement of Russian athletes' doping samples during the Winter Games in Sochi. According to him, the activities were conducted at night, "in a shadow laboratory lit by a single lamp."

The findings made by the WADA committee cannot but raise doubts about their reliability and objectivity. Above all, they strangely coincide with another US-led attack against the Russian Olympic team. To crown it all, both USADA and WADA are funded by the Executive Office of the US President.