Putin: The West shall work with Russia on equal terms

On April 14, Russian President Vladimir Putin is holding a televised Q&A conference. Most questions were related to issues of public utilities, corruption and socio-economic guarantees. This year's Q&A conference is Putin's 14th. The first conference was held in 2001. The longest conference took place in 2013, when Putin was answering questions for four hours, forty-eight minutes. 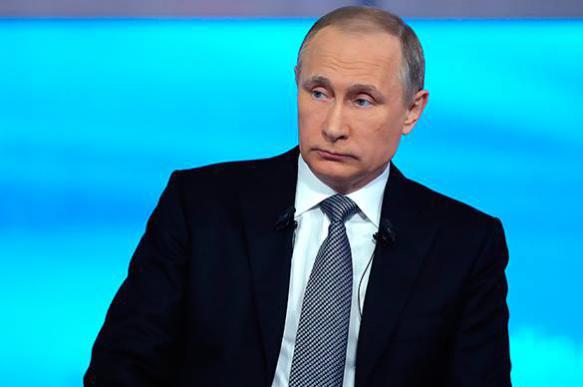 Most questions were related to the current state of affairs in the Russian economy. One of the questions in the conference was about growing prices on food in Russia. Putin said that the rise in food prices came a result of man-made measures taken for the development of agriculture under the conditions of sanctions. The president noted that the inflation rate in Russia was 12.9%. According to him, food prices grew "significantly" last year.

Has crisis reached the bottom in Russia?

As for positive aspects in the Russian economy, Putin pointed out a low level of unemployment, the parent capital growth and no increase in the unemployment rate.

Putin was asked whether he is confused about the fact that Russia has been concentrated on three questions lately: whether oil grows in price, whether the bottom of the crisis has been reached and whether Russia needs to print more money. Putin responded that the discussion in Russia was in fact focused on other topics: how to ensure the inflow of investment, how to raise efficiency and how to help most vulnerable categories of citizens.

When speaking about the Syrian campaign, Putin was asked whether the hydra of ISIS may grow another head after Russian forces were withdrawn from Syria. Putin said that Russia provided serious assistance to Syrian Presideте Assad, because the Syrian army was able to liberate the city of Palmyra from terrorists after the withdrawal of Russian forces. Yet, he added, the threat of terrorism persists.

When asked whether Aleppo and Raqqa were to be liberated soon, Putin said that those regions were difficult. According to him, there are units of armed opposition and Jabhat en-Nusra terrorist group there. Yet, Putin assured that Russia would take every effort not to let the situation aggravate.

Answering a question about the resumption of air communication with Egypt and Turkey, Putin said that Russia was not the primary cause behind the decision to suspend flights to Turkey and Egypt. According to him, armed clashes in Sinai occur almost every day. "In these conditions, we had no right not to tell people that it was dangerous to go there," he said. For the time being, he said, there is no algorithm to ensure safe flights to Egypt.

Turkey collaborates with terrorists, instead of destroying them, Putin said. In the south of Turkey, there is a civil war going on, in which military hardware is used, but they prefer not to notice the hostilities. Terrorist attacks in Turkey occur every week. There is no guarantee that Russian tourists in Turkey can feel safe. Putin recalled massacre in Tunisia from a few years ago, when terrorists attacked tourists on the beach. He knows that Ankara tries to bring tourists back, but it is still not safe to stay in Turkey, he added.

"When are you coming to Crimea for holidays?" someone asked the president during the conference. "I haven't thought of that yet, but I will come for several days at least. Thank you very much," Putin said in response to an invitation.

Putin was also asked when he was going to introduce the First Lady to Russians. Noteworthy, it has been reported recently that Putin's ex-wife Lyudmila Putin remarried.

"Everything about private life remains of interest to people, of course, but these things are not of paramount importance. Maybe, I will be able to satisfy your curiosity some day," he added.

A child wondered what Putin was doing in his childhood, when adults were making him eat porridges that he disliked. The president confessed that adults were not trying to make him do the things that he did not want to do. "I eat porridges every morning and I enjoy them. Today, I had pearl barley porridge. The fewer teeth you have as you age, the more you like porridge," Putin joked.

During the conference, Putin was informed about an outrageous situation at a fish factory on Shakatan Islands (Sakhalin region), where people have not seen their wages since August 2015, but were forced to pay accommodation costs, even though they had no opportunity to leave the island.

The president was left speechless and asked the prosecutor general to look into the situation in detail. The president publicly apologized to those who suffered as a result of unlawful actions taken by the administration of the fish factory.

Putin was asked why he shows no reaction to slanderous information that comes from the West with an intention to damage the reputation of Russia and its leaders. Putin said that the information in the Panama Papers was truthful, but the point of the whole scandal was to mess up the issue.

"Some of my friends do business, and questions arise. They could never imagine that a friend of mine, Sergei Roldugin, could spend all his money on musical instruments. Those reports were most likely prepared by legal experts, rather than journalists, but they have missed the point by a mile," Putin said.

"The ears of the masterminds are sticking out everywhere, but they do not even blush. This is not about specific people, and not about the positions that they take. The matter is about the country that they can not make dance to their tune. One must work with Russia on equal terms, and this is the main conclusion of the offshore scandal," Putin said.

Who is worse for Russia: Clinton or Trump?

Putin was asked who is worse for Russia - Hillary Clinton or Donald Trump. The president replied that one needs to look for those who are better. Modern democratic international relations can be built only on mutual respect, President Putin said.

About upcoming elections to the State Duma

Answering the question of "Why go to the polls, if United Russia wins anyway?" Putin quoted Joseph Stalin ( "the main thing is not how they vote, but how the they  count the votes") and said that a party that stays in power for many years always bears a heavy burden of responsibility. "United Russia is a stabilizing element of our political system. In the middle of the 1990s, everyone was promising everything, but no one was doing anything to keep their promises," Putin reminded.

The role of "United Russia" is extremely important, but it does not mean that the party has any preferences, assured Putin. As an example, Putin referred to elections in the Irkutsk region, where a United Russia candidate lost to a representative of the Communist Party.

A political scientist from the studio asked Putin about the political changeability in Russia. "Voters have to deal with a well-established line of party brands - United Russia, LDPR, and the Communist Party. The situation in the non-systemic opposition is the same. Are doomed to have this stability?" the author of the question said.

Putin said that other countries have a similar situation. In the United States, for example, there was George H. Bush, George W. Bush, Bill Clinton and Hillary Clinton. "Where is changeability there? There are pluses and minuses," Putin said. The number of political parties allowed for elections in Russia has increased, he added.

About Russia and international sanctions

A farmer told Putin that he was concerned about the possible lifting of sanctions. If sanctions are lifted, their milk will not be competitive on the market.

Putin said that he did not think that the West would be ready to lift sanctions from Russia in the near future, even though the Minsk agreements are being executed. "They will come up with something else to keep these restrictions in effect, and we will keep ours too," Putin said. If the sanctions are lifted, Russia will indeed find itself in a vulnerable position because of WTO rules.

About Minsk agreements and the fate of Donbass

Speaking about the implementation of the Minsk agreements and the future of Donbass, Putin said: "The people living there need to feel safe and understand that they have civilized rights," the Russian president said. Putin acknowledged that many things "got hung up" in the execution of Minsk agreements for Ukraine. "Constitutional reforms on the special status of the regions of the south-east of Ukraine get protracted, and President Poroshenko does not sign the law on amnesty.

Russia is not to blame for those delays. The West should speak to Kiev instead of putting the blame on Russia for failures to execute the Minsk Accord, Putin said.

The russian president said he did not know anyone in the new government of Ukraine. "There were oligarchs there before, and they are still there now. Here, they try to arrange an offshore scandal, but in Ukraine, leaders sit in offshore companies. The clan management system has strengthened in recent years and this is not what only we think - this is the point of view of our Western partners too, I assure you," Putin said.

A graduate of the University of the Netherlands, who has been living and working in Russia for several years, said that she felt safer in Russia than in Europe. The young woman asked Putin whether it was possible to simplify the rules for the admission of foreigners to Russian universities.

Putin said that terrorists effectively use certain features of Europe, such as the Schengen area. Russia will welcome the employment and studies of foreign experts and students, and there are no restrictions in this regard, except for state-funded places.

About the sales of Russian arms

After the Syrian campaign, the interest in Russian arms in the world has increased. "We are ranked second in the world after the US in arms sales. We even had to build new factories. In this sphere, everything is fine," the president said. The state defense order will be executed in full, he added.

Putin: Obama is a decent man

Putin was asked to comment on a recent remark from his US counterpart Barack Obama, who admitted that his biggest mistake as president was the ill-considered intervention in the Libyan conflict.

"This once again confirms that Obama is a decent man," Putin said seriously. "When serving as a senator, Barack would criticize the US administration for operations in Iraq, but when serving as president, he made the mistakes in Libya and he acknowledged that. Not everyone can do it. They try to bite him from all directions, but only a strong man can admit his mistakes," Putin said.

At the same time, the bad thing is that a series of mistakes continues. "They nearly made the same mistake in Syria, but the US managed to work in a positive key on the syrian issue," he added.

During the conference, Putin was also asked whether he was going to run for president in 2018. "It is too early to speak about it," he said. "One needs to think what to do today, how to justify people's expectations, achieve the goals that were set and accomplish the promises that were made," Putin concluded.