Despite the crisis, the Russian economy did not collapse in 2015. The decline in GDP in 2015 made up only four percent, although in 2009, the index was larger - eight percent. Such an insignificant decline in GDP against the backdrop of the closed financial market is obviously an achievement for the Russian economy in general. However, there were other economic achievements that Russia made in 2015. 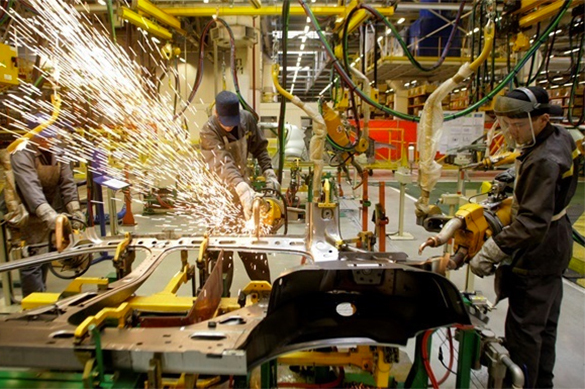 Peaceful nuclear power and IT

This waste-free production of electricity is possible owing to the closed nuclear fuel cycle. There are only a few countries in the world that have this technology, and Russia, according to experts, is a world leader in this field. The pilot industrial fast neutron reactor BN-800 with liquid metal coolant is to become a prototype for commercial, more powerful units with BN-1200 reactors.

2. Russian IT specialists take the lead not only in innovation. Exports of software and IT-services from Russia have been growing steadily. Its volume has increased from $2.8 billion in 2009 to $6 billion in 2014, and are expected to increase by 16 percent and to $7 billion in 2015.

The number of farms has been growing as well. For example, 44 new farms have appeared in the Penza region.

4. The Russian Federation has executed the plan for the exports of arms in 2015 in the amount of more than $15 billion. The goal is to keep the second place after the US in the world, officials with the Federal Service for Military-Technical Cooperation said. The plan is realistic as Russia has a good position in air defense, combat aircraft and tanks. Russia is the world's largest exporter of tanks; the country has competitive holdings in all fields of the defense industry. The US, for example, still buys Russian rocket engines and other equipment for the space program and will be forced to do so in the future as they have no safe analogues.

The holding consists of five helicopter plants, two design bureaus, and enterprises for the production and maintenance of spare parts, aircraft repair plants and a service company that ensures after-sales support in Russia and abroad.

6. Russia has successfully launched a huge project in the field of energy industry. On December 2 and 13, Russia launched two branches of the energy bridge to the Crimea. Four branches of the bridge are to be built in total to ensure stable electric power supplies to the peninsula.

7. In 2015, Russia has carried out 29 launches of carrier rockets. For comparison, the United States of America has conducted 19 space launches, including two failed ones. The Russian orbital group has been growing both quantitatively and qualitatively. In 2015, 17 unmanned spacecraft were put into orbit for serving the interests of Russian consumers.

8. Non-governmental pension funds started playing a significant role in the country's financial market in 2015. The mission of non-governmental pension funds is to provide loans to the economy, rather than to the budget deficit. According to the Russian Central Bank, the pension savings in 2015 were directed to develop the real sector of the Russian economy and revitalize the country's domestic debt market. The volume of investment in corporate bonds and stocks has doubled.

10. The Neftekamsk Automobile Plant, a part of KAMAZ, assembled the first ten articulated dump trucks under the brandname Bell. The trucks will be delivered to  Surgutneftegaz oil and gas company. The bodies of the new trucks are of Russian production.

Bell is a South African machine manufacturing company that makes dump trucks, bulldozers, wheel, forklift and crane loaders, excavators, scrapers and graders. A joint project by Bell and NefAZ is a good example of real cooperation within BRICS.