In 2015, the Russian nuclear industry marks the 70th anniversary. It all started with the creation of a nuclear bomb and proceeded to Russia's development as a nuclear power. Yet, the glory of Russia's nuclear industry is not limited to the Soviet times only. Russia has been reviving its nuclear potential after the havoc of the 1990s. Pravda.Ru conducted an interview on the subject with science journalist Vladimir Gubarev. 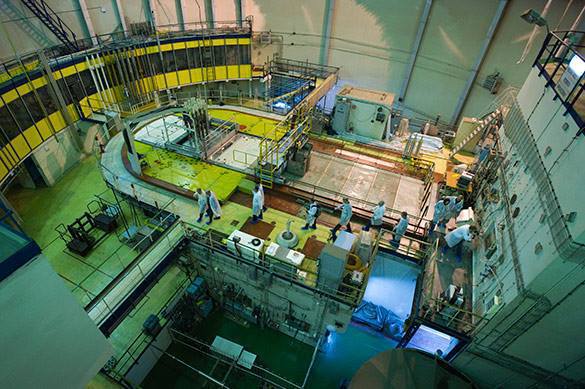 "Soviet scientists started research in the field of nuclear physics in the early 1920s. Yet, the history of the Russian nuclear industry officially tarts from 1945. What happened during that year?"

"A nuclear bomb was built. A committee was formed, headed by Beria, and the committee's goal was to create nuclear weapons, because two weeks before that the USA had bombed Hiroshima and Nagasaki. Although, it seems strange that Stalin made the decision only after the bombings - he knew that the United States was working on a nuclear bomb.

"The history of the atomic project is, of course, great, fantastic, interesting and highly important. We must all realize that everything that has been created in our country today, including in the field of science, engineering and technology - all of that began with the development of the Soviet atomic project - all of that, including space research.

The R-7 rocket that launched the first satellite and then Gagarin into space was developed after the meetings of Kurchatov, Keldysh, Korolev and Mishin. Practically all areas, all major institutes of physics - they all appeared owing to the atomic project of the USSR. The project showed influence even on literature. Solzhenitsyn was saved thanks to the Soviet atomic project. After the Great Patriotic War, it became clear that there were only 6,000 physicists and mathematicians left in the country, including school teachers. The rest were killed. Solzhenitsyn was a mathematician and physicist and also a school teacher.

"Afterwards, large educational institutions were established, without which it would be impossible to develop the industry. Mstislav Keldysh was a a brilliant scientist, he was three times Hero of Socialist Labor. In 1955, he received the first decoration for calculations of thermonuclear weapons."

"How many years have passed since the beginning of the process till successful tests?"

"In fact, it took three years to build a copy of the US atomic bomb. The bomb was tested, and there were five nuclear bombs made. All of that was made possible owing to intelligence. The genuine Russian bomb appeared in 1951, and it was much more effective than the American bomb. The fate of the country was at stake. I have recently had a chance to take a look at new declassified US documents. The USA was planning to strike the first blow on the USSR by launching 250 nuclear warheads. Eight of them were for Moscow, seven were for Leningrad. The second wave of the nuclear attack consisted of 120 warheads and so on. The Americans shelved those plans because of our air defense system and because of our own nuclear weapons. The Americans thought that the USSR would build an A-bomb some time in 1958, but we did it in 1949.

"How did they react?"

"It was certainly a shock for the Americans, they started investigating how we managed to exceed their expectations."

"Does Russia make any progress now?"

"There is a unique factory in Russia, and this factory is built in a mountain so that it doesn't stop working even in case of a nuclear blow. The factory was built 250 meters under the ground. It produces a whole new type of fuel. The construction of the factory started in 1950. It used to produce the amount а plutonium that was enough to ensure the security of the whole country. Yet, in the beginning of the 1990s, three reactors were stopped. You can take weapons-grade plutonium in your hands, you only need to wear gloves. Energy plutonium is very active. Yet, our scientists managed to solve this problem. It produced a jaw-dropping impression on the French. Our French colleagues told us that we had left them two generations in the past."

"Can Russia do without the West now?"

"A few years ago, I went to the satellite-making factory named after Academician Reshetnev. I asked them the very same question - can you make satellites without foreign-made parts? The answer was: "No, we can't do it now, but we could without any problems in the past."

"During the 1990s, everything was lost. Then I went to Arzamas-16 in Sarov and Snezhinsk, the Chelyabinsk region, and i asked my colleagues there, whether they could make nuclear weapons without using Western parts for that. They told me that they can, and they already work that way. Fortunately, there are people in our country, who understand how serious the issue of national security is."