Forty-five years ago, on March 27, 1968, during a training flight on a standard fighter, Yuri Gagarin, the first man in history to make a flight into space, was killed. It seems that the official results of the investigation into the death of the cosmonaut were announced long time ago, but various (sometimes very questionable) theories of the tragic event still continue to emerge. 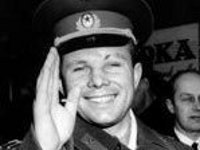 Gagarin's flight was a breakthrough of the Soviet science and technology. It was a triumph of the Soviet Union. On April 12, 1961 rocket Vostok with a spacecraft Vostok-1, carrying Yuri Gagarin, was launched from the Baikonur Cosmodrome. He went into space, making a circle around the planet. At the orbit the cosmonaut conducted a simple experiment: he drank, ate, and took notes with a pencil. He noticed that a pencil flew in zero gravity, and later advised his colleagues to tie down some necessary items.

Incidentally, even in his successful space flight there was something that made people worry. Due to a failure in the braking system, the lander with Gagarin landed not in the planned area ​​110 kilometers from Stalingrad, but in the Saratov region, near the village of Engels in Smelovka. The first people who met the cosmonaut after the flight were the wife of a local forester and her six year old granddaughter.

Soon the military from the air defense battalion who noticed the lander came to the scene, followed by local farmers. One group of soldiers took custody over the lander and the other drove Gagarin to the place where the battalion was deployed. From there Gagarin reported on the phone to the division commander: "I ask you to report to the Air Force Commander: the task is completed, I landed in a given area, I feel good, no injuries and damages."

As the story goes, right on the spot of landing Gagarin was awarded his first prize for a trip into space - the medal "For development of virgin lands." Later, the same medal was presented at the landing site to many other cosmonauts. Immediately after the flight, Gagarin was promoted from a lieutenant to a major, bypassing the rank of a captain. Gagarin was later appointed chief instructor cosmonaut, and later the commander of the cosmonaut division. The space pioneer actively participated in the political life of the country.

His death was a tragedy for the entire world. I remember my first clear childhood memory. We, the children, were in the kindergarten, and everyone was crying: teachers, nurses, even the usually stern principle. We, the kids, without even knowing what it was, wailed out loud. At home my father, a long-range aircraft pilot, explained that Gagarin has crashed.

On March 27th, 1968, Yuri Gagarin was killed in a plane crash, performing a training flight on MiG-15UTI with an experienced instructor Vladimir Seregin, near the village of Novoselovo of Vladimir region. The debates about the causes and circumstances of the crash continue to this day.

Gagarin was only 34 years old at the time of his death, and the most likely candidate to spearhead the Soviet expedition to land on the moon (the Americans did it ahead of the USSR in 1969) .

The official findings of the State Commission stated that the crew made a sharp maneuver and fell into a tailspin because of the changing in-flight situation (the details were not specified). Trying to bring the plane into a horizontal position, the pilots crashed and died. No equipment failure or malfunction was identified. Chemical analysis of the remains and blood of the pilots found no foreign substances. KGB Commission found numerous violations by airport ground staff. There were other findings, published after the collapse of the Soviet Union.

According to the conclusions of some experts, the aircraft was in a diving trajectory and the pilots appeared to have lost control. The then head of the country Leonid Brezhnev supposedly banned publication of the results, and sent the 30-volume report to the archive. In any event, this data is contained in several versions of the tragedy. The investigators were allegedly forbidden to publish their findings under the pretext that it would "upset" the country. Soon the matter was forgotten altogether, as Soviet tanks rolled into Czechoslovakia - this was the time of "Prague Spring."

What really happened to Gagarin, according to some historians, was not even told to his family. Many years later, his mother asked whether he was killed by the Brezhnev regime. This theory, once fueled by the "silence" of the authorities, is still alive, and to this occasionally emerges in various media outlets. Over the years, conspiracy theories proliferated.

Other theories began to surface, sometimes the most absurd. There was a theory that the two pilots were drunk and lost control of the plane. There were rumors that after the triumphant return to Earth, it was difficult for Gagarin to get used to the fame, and he allegedly began to drink. It was even said that he was abducted by aliens, or that he survived the crash and died in a Soviet psychiatric hospital in 1990. There was a theory that Seregin killed them both, because he envied Gagarin. According to another one, Gagarin staged his own death and had plastic surgery, and also that he was hit by the CIA. The investigators also speculated that the aircraft collided with a foreign object, or a flock of birds, but found no traces on the fuselage to support this theory. They found no fault in the engines or the control system.

Incidentally, no one could understand why two experienced pilots were not ejected from the aircraft. Russian media at the time reported that Gagarin heroically stayed at the wheel, to prevent the plane from crashing into a nearby school, but no evidence of this theory was provided. According to a web source, the investigation carried out in 1986 suggested that Gagarin's "MiG-15" was knocked off its course by turbulence caused by supersonic aircraft located in the area.

In any case, a legion of loyal fans of the first cosmonaut Yuri Gagarin still believes that these conspiracy theories are spread by Russian ill-wishers and historians who want to discredit one of the great historical figures of Russia.