Nuclear disarmament has become one of the most important elements of safe future and peaceful cooperation between the countries around the world. President Bush and President Vladimir V. Putin signed in 2002 the treaty that calls for each country to cut inventories to between 1,700 and 2,200 warheads by 2012.The treaty outlined the direction for further cooperation in this field, but the USA has found a loophole and are going to turn the treaty to their advantage and to use it to gain their aims. 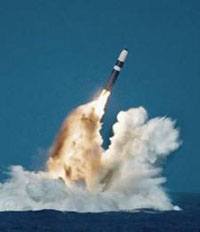 In the Cold War arms race, scientists rushed to build thousands of warheads to counter the Soviet Union. Today, those scientists are racing once again, but this time to rebuild an aging nuclear stockpile. Scientists at Los Alamos National Laboratory in New Mexico are locked in an intense competition with rivals at Lawrence Livermore National Laboratory in the Bay Area to design the nation's first new nuclear bomb in two decades.

The new weapon, under development for about a year, is designed to ensure long-term reliability of the nation's inventory of bombs. Program backers say that with greater confidence in the quality of its weapons, the nation could draw down its stockpile, estimated at about 6,000 warheads.

Scientists also intend for the new weapons to be less vulnerable to accidental detonation and to be so secure that any stolen or lost weapon would be unusable.

By law, the new weapons would pack the same explosive power as existing warheads and be suitable only for the same kinds of military targets as those of the weapons they replace. Unlike past proposals for new atomic weapons, the project has captured bipartisan support in Congress.

But some veterans of nuclear arms development are strongly opposed, contending that building new weapons could trigger another arms race with Russia and China, as well as undermine arguments to stop nuclear developments in Iran, North Korea and elsewhere.

And, the critics say, It would eventually increase pressure to resume underground nuclear testing, which the U.S. halted 14 years ago.

The program to build the new bomb, known as the "reliable replacement warhead," was approved by Congress in 2005 as part of a defense spending bill. The design work is being supervised by the National Nuclear Security Administration, which is part of the Energy Department.

The laboratories submitted detailed design proposals in March that ran more than 1,000 pages each to the Nuclear Weapons Council, the secretive federal panel that oversees the nation's nuclear weapons. A winner will be declared this year.

If the program is implemented, it would require an expensive remobilization of the nation's nuclear weapons complex, creating a capacity to turn out bombs at the rate of three or more a week.

Proponents of the project foresee a time when nuclear deterrence will increasingly rest on the nation's capacity to build new bombs, rather than on maintaining a massive stockpile.

The proposal comes as Russia and the United States have agreed to further reduce nuclear stockpiles. The Moscow Treaty signed in 2002 by President Bush and Russian President Vladimir V. Putin calls for each country to cut inventories to between 1,700 and 2,200 warheads by 2012.

Without the reliable replacement warhead, U.S. scientists say the nation will end up with old and potentially unreliable bombs within the next 15 years, allowing adversaries to challenge U.S. supremacy and erode the nation's so-called strategic deterrent.

The new bomb "is one way of ensuring that our capability is second to none," said Paul Hommert, a physicist who heads X Division, the Los Alamos unit that built the first atomic bomb during World War II. "Not only today, but in 2025."

But critics say the program could plant the seeds of a new arms race.

The existing stockpile will be safe and reliable for decades to come, according to defense experts and nuclear scientists who have long supported strategic weapons. They say that rather than making the nation safer, the program will squander resources, broadcast the message that arms control is dead and even undermine the reliability of U.S. weapons.

The new bomb would have to be built and deployed without testing. The U.S. last conducted an underground test in Nevada in 1992 and has since imposed a moratorium on new testing.

But without a single test, doubts about the new bomb's reliability would eventually grow, said Sidney Drell, former director of Stanford University'sLinear Accelerator Center and a longtime advisor to the Energy Department.

"If anybody thinks we are going to be designing new warheads and not doing testing, I don't know what they are smoking," Drell said. "I don't know of a general, an admiral, a president or anybody in responsibility who would take an untested new weapon that is different from the ones in our stockpile and rely on it without resuming testing."

If the U.S. breaks the moratorium on testing, then Russia, China, India and Pakistan, if not Britain and France, probably would conduct tests as well, said Philip Coyle, former assistant secretary of Defense and former deputy director of Livermore. Those countries would gain more information from testing than would the U.S., which has invested heavily in scientific research as an alternative to testing.

The stockpile includes thousands of weapons held in reserve in case a defect is discovered. Each year, some of those weapons are disassembled for inspection. The U.S. could significantly reduce the reserve if it had greater confidence in the reliability of its warheads, Brooks said.

That confidence involves not only whether a weapon will explode, but whether it will do so with the intended force. In every U.S. nuclear weapon, a primary blast must be strong enough to trigger a secondary thermonuclear reaction. If the first stage falls short, the weapon has half the power.

The driving force for developing the new weapon has come from the scientific community and members of Congress. Although the Defense Department did not initiate the program, it has won wide support within the military as well as the Bush administration.

Meanwhile, the Los Alamos and Livermore labs are revving up their culture of one-upmanship.

During the Cold War, the scientists adhered to a motto that the Soviet Union was the rival, but the competing lab was "the enemy." Still, it is a scholarly competition with few fighting words.

Though neither lab has developed a new weapon since the late 1980s, they have received billions of dollars in investments by the federal government for office buildings and massive physics machines.

Since the end of the Cold War, the labs' top priority has been to maintain existing weapons. The labs predict that the plutonium components in existing weapons have a life of 45 to 60 years, meaning that in the next 15 years some will begin to deteriorate and replacements will be needed.

On average, the U.S. has spent an estimated $6 million per warhead since World War II, said Stephen I. Schwartz, author of "Atomic Audit," a history of strategic weapons costs. Based on that, replacing all of the nation's 6,000 nuclear weapons could cost $36 billion.

The idea of having two labs compete to design nuclear weapons dates to the 1950s, when federal officials concluded that such a system would promote innovation and also allow the labs to monitor each other's science in an area crucial to national security. The labs are federally funded and operate under contract with the National Nuclear Security Administration.

Each has about 20 physicists, chemists, metallurgists and engineers on its reliable replacement warhead team, backed by a few hundred other experts working part time on the weapon. Among them are younger scientists learning the art and craft of nuclear bomb design from Cold War veterans.

Over the last decade, the labs have invested several billion dollars in computing, creating a succession of the world's fastest supercomputers and other innovations. Livermore has taken the lead in that field. Its "purple" computer, with a footprint the size of a tennis court, does mathematical models of nuclear detonations. It uses enough megawatts of electricity to supply about 4,000 homes with power.

Meanwhile, Los Alamos is developing better ways to cast molten plutonium into hollow spheres, a key part of nuclear bombs, according to Deniece Korzekwa, a casting expert at the lab's manufacturing center.

Each laboratory's culture and body of technology is very different from the other's. Each has developed its own recipes for plastic explosives used to start an atomic chain reaction.

Even in promoting their designs, each lab has taken a different approach.