Russia to teach G8 what's what

On January 1st, 2014, Russia began the presidency in G8 that includes the governments of the UK, Germany, Italy, Canada, Russia, USA, France and Japan. What global and domestic interests will Russia advance in this position? Will Moscow be able to do anything given the complex of "autocratic Putin" the West has developed? 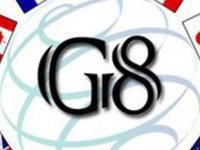 There are no formal criteria for the G8 membership. The G8 Charter states the need for the powers to consult about particular issues with consideration of open democracy, individual liberty, and social progress. Russia joined this elite club in 1998, transforming it from G7 to G8. At the time the West was fascinated by the readiness of the Russian President Boris Yeltsin to accept Western norms of democracy, join the EU and NATO, and follow the neoliberal model of economic development. Then Western experts emphasized that Russia's acceptance to G8 was an advance.

In 2006, Russia had G8 presidency for the first time and held the G8 summit in St. Petersburg. Key issues proposed for discussion by Russia at the time were energy security, education and the fight against infectious diseases. This year the agenda is completely different.

Moscow plans to emphasize the fight against terrorism and drug trafficking, as well as the settlement of regional conflicts. Russia also intends to engage in the provision of global sustainable economic growth. Russian diplomacy has gained courage to deal with the issues of a completely different scale. This is explained by Russia's success in the diplomatic arena last year - the initiative to overcome the danger of the situation in Syria, participation in the negotiations with Iran about its abandonment of uranium enrichment, and addressing the complex situation in Ukraine.  In 2013 Russia has significantly strengthened its role as a great power whose policy is to stabilize the situation in the world," said former Prime Minister Yevgeny Primakov on January 13 speaking at a meeting of the "Mercury Club."

Some Western analysts doubt the effectiveness of G8. Thomas Ambrosio, a professor of political science at  North Dakota State University, told the Voice of America that democracies (all except Russia) of G8 were united by many factors in the fields of diplomacy, economy and ideology, and the absence of the club would have no effect on either one of them. Instead, we observe an annual farce when a group of wealthy democracies communicates with the authoritarian G8 member (Russia) in the absence of the second largest economy in the world (China). He also suggested that due to the anti-Western course of the Russian President this year, the members will not listen to him much. This is an attempt to put pressure on Russia to make it stop resisting the attempts of the West to impose its tolerance that turned into loss of morality, and democracy that leads to wars.

However, David Cameron's recent appeal to Vladimir Putin where he counted on Russia's help to solve the issue of Scottish separatism indicates that Ambrosio's words are nothing more than a propaganda stunt. "It is not in the interests of G8 to allow a situation where the country is split into smaller components, and elements of chaos and unpredictability in international politics will continue to grow. I suppose that a political statement of G8 in this respect would be support for Cameron, the preservation of the territorial integrity of the United Kingdom," told Pravda.Ru General Director of the Russian Council on Foreign Affairs Andrei Kortunov.

The expert explained that the G8 Action Programme consists of three main components. First of all, these are legacy issues where continuity is important. The second component is issues lobbied by the presiding country reflecting this country's credibility, or possibly reflecting the authority of other countries as well. The third component is situational issues that arise in connection with drastic changes in the international situation, crises, and new opportunities. Vladimir Putin, for example, after a visit to Italy said that migration may be a topic for a discussion by G8, said Andrei Kortunov. Speaking about the task of the fight with terrorism, extremism and drug trafficking, an expert of the Federal Information Center "Analysis and Security" Sergei Sokolov said that Russia first of all had to establish coordination between the G8 countries as this is a phenomenon of international nature. The expert anticipates great difficulty in this area because the West has double standards in this matter.

From the standpoint of economic issues of the bloc, Russia is one of the countries that, to the surprise of the international community, has emerged from the financial crisis quicker than expected. Russia has proven that it can make the right decisions for itself and the world in a crisis situation. "Russia has a significant interest in reorientation of European countries in favor of a revision of the Energy Charter, which until now could not be done," told Pravda.Ru Aza Mihranyan, head of economics department of the CIS Institute. "It is interesting for Russia to restore mutual relations with other countries exporting raw materials in order to better define and influence the world market situation and the level of energy prices. It is beneficial for Russia to start industrial and technological cooperation, and in this sense the presidency is quite advantageous and could allow launching projects for technological interaction with the developed countries," said Aza Mihranyan.

Andrei Kortunov believes that Russia could get benefits at two levels.  First, at the level of general policy, that is, the status, "it's good in terms of public relations of the country; it creates a positive backdrop for our foreign policy." There are also specific benefits associated with the adoption of certain documents and strategies. "We have our own interests, for example, we are concerned with the situation in Afghanistan, and if we manage to advance our interests it will be a very important decision of G8 for us. We are also interested in the issues of resolving the crisis, for example, in the regions adjacent to our borders. If we manage to reach agreements here, of course, it will also be an advantage for us," Andrei Kortunov told Pravda.Ru.