The West wants Russia out of Libya 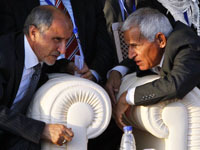 One of the main intrigues in Libya now is connected with the division of the oil and gas riches of the country between the winners. Hardly had the war in the country ended when foreign companies decided to share the Libyan market between them. They already ask for quotas and licenses from the rebels.

Apparently, the West intends to ignore Russia's interest in the country. Russia had not executed its obligations connected with the training courses for Libyan students, the country's National Oil Corporation said.

The corporation invited Gazprom's representatives to discuss the question in Tripoli. The Libyan side does not exclude that the contracts, which were concluded with the company under Gaddafi's rule can be revised.

The chairman of the oil company, Nouri Berruien, the Russian side is supposed to fulfill its obligations. Berruien also said that he wanted to know the reasons why Russia did not abide by its obligations. It seems that the new Libyan authorities deliberately want to terminate the agreement.

Russia's gas giant Gazprom has the right to explore several oil fields in Libya. In addition, Moscow agreed to make concessions for the previous Libyan administration. Russia agreed to write off nearly a half of Tripoli's debt in exchange for guarantees to conclude multi-billion contracts in oil, gas, transport and defense industries.

Western media say that the new Libyan authorities may revise the contracts concluded under Gaddafi's rule. Russia and China stood up against the bombing of Libya. Therefore, these two countries may suffer losses now.

Will Russia ever receive the Libyan debt now? Pravda.Ru asked this question to Sergei Demidenko, an expert with the Institute of Strategic Assessments and Analysis.

"There are different points of view about the future division of Libyan oil and gas resources. I personally believe that Russia is not going to get anything in the new Libya now. I mean that about all industries, including the defense and the transport spheres.

"The Libyan market is not that large. However, it is a good piece for large oil and gas companies from Britain, France, Italy and so on. It would be strange if the West could let Russia in there too. It will be a tight place even without Russia. Italy's Eni controlled 35 percent of Libyan oil shipments prior to collapse of Gaddafi's regime. Italy's neighbors have a very good appetite at this point, so there will obviously be a fight.

"One may also assume that the return of foreign companies to the Libyan market will not go smoothly. Transnational corporations will declare their intention to revise the scheme of cooperation that was practiced under Gaddafi's rule. The companies will demand the changes that will bring maximum profit for them. In other words, they will try to pay as little as possible to Libya and dictate their conditions to the country.

"This may probably work in the beginning. However, one may not give any guarantees for the future. The work conditions for foreign companies in Libya will only get worse, because Libya will not be able to avoid the crisis of power.

"When Islamists clash with tribal groups in the country, the country will plunge into chaos. It will be very problematic to work under such conditions. The winners will have to do the same things that were done in Iraq after the collapse of Saddam Hussein's regime. they will have to establish normal life, rebuild the infrastructure, recreate the armed forces, and so on.

"Otherwise, the Libyan population will grow radical very quickly. Those rebels who armed their guns at Gaddafi's followers may choose another target - Western representatives. It is an open secret that the war in Libya began because of its oil and gas. Everything has its price, though.

"Until recently, the Libyan oil made up from two to three percent in the total volume of oil production. This is basically nothing if we look at it in global scale. It is possible to extract more oil in Libya. Only one-third of the geological map of this country has been explored.

"To expand the production, one would have to invest in the geological exploration first. Secondly, it is necessary to create the adequate infrastructure. All of that requires colossal investments that will have to be made under colossal risks.

"Libya was bombed for seven months. Many buildings in the country were demolished, the water supply system was damaged - this is very big money. The question is where this money can be found under the condition of the global crisis. Will the West be willing to invest in Libya like that at all? It is quite possible that the West will simply wrap up its activities in Libya and there will be no one there to extract oil. Just look at what's happening in Iraq. Terrorist acts and explosions of oil pipelines continue to occur there."