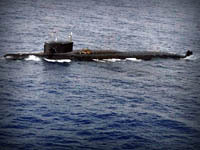 The new Russian submarine, Lada, will end the era of USA's reign at sea. Washington will lose the main instrument of "power projection" to remote regions and may finally lose its global geopolitical role as well.

Anti-Russian militaristic hysteria has been snowballing in the West lately. Having noticed the revival of the traditionalist, imperial Russia that the deceitful Western Sodom has been humiliating and insulting for decades, the "free" European and American media filled their reports and pages with alarmist headlines about Moscow's "military preparations."

Should the Russians launch a rocket from the Plesetsk cosmodrome or from a submarine in the Barents Sea, or send its strategic aircraft flying along European borders, countless Western publications explode in accusations of "militarism and imperialism," "nuclear weapons rattling" "intimidation of the international community," and so on and so forth. Meanwhile, important news reports that are directly related to a change in the military-strategic balance of power in Eurasia, often pass unnoticed.

For example, on October 13, 2014, RIA Novosti news agency reported, citing a source at the military-industrial complex of the Russian Federation that Russia decided to launch serial production of air-independent propulsion power plants that would be used for future Project 677 "Lada" submarines."

The message did not receive any attention of the general public. Even military observers paid no proper attention to it. Yet, the news marked a real revolution in the field of military submarine making.

Advantages and disadvantages of underwater hunters

Today, all submarines are divided into two groups by the type of power plants: submarines with a nuclear power plant (nuclear reactor) and diesel-electric submarines that move on the surface with the help of a diesel engine, and use battery-powered electric motors when navigating under the water.

Nuclear submarines appeared in the Soviet Navy in the late 1950s. The first nuclear submarine of Project 627 called the Leninsky Komsomol was put into operation in 1957. Since then and to this day, nuclear submarines constitute the main striking force of the Russian navy. They carry a wide range of most formidable weapons in the world - from strategic intercontinental missiles and tactical nuclear torpedoes to high-precision long-range cruise missiles - the core of the Russian strategic forces of non-nuclear deterrence.

Nuclear submarines possess a number of outstanding advantages. A nuclear sub can stay under the water for a practically unlimited period of time; it has high underwater speed, impressive submersion depth and an ability to carry a huge number of various weapons and equipment. Modern large displacement nuclear subs can be equipped not only with weapons, but also with highly efficient sonars, systems of communications, electronic reconnaissance and navigation.

At the same time, the main advantage of a nuclear power plant - its power - is the source of the main drawback of nuclear submarines. This drawback is noisiness. The presence of a nuclear reactor (and sometimes two) on board the submarine along with a whole range of other systems and mechanisms (turbines, generators, pumps, refrigeration units, fans, etc.) inevitably produces a variety of frequency oscillations and vibrations. Therefore, a nuclear submarine requires sophisticated technology to reduce the noise level.

Yet, a diesel-electric submarine is almost silent under water. Battery-powered electric motors do not require turbines and other noisy equipment. However, a diesel sub can stay under water for a relatively short period of time - just a few days. In addition, a diesel submarine is slow. The shortage of power, in turn, imposes serious constraints on displacement, weapons, and other key characteristics of diesel-electric submarines. In fact, these subs can hardly be referred to as "underwater" vessels. "Diving" would be a better word as they stay on the surface most of the time on deployment routes. In combat patrol areas, diesel-electric submarines have to ascend regularly and start diesel engines to recharge batteries.

For example, Russia's state-of-the-art diesel-electric submarine of Project 636.3 has only 400 miles of undersea navigation. In addition, the submarine moves under water at the speed of 3 knots, i.e. 5.4 km/h. Thus, such a submarine is unable to pursue an underwater target. The sub relies on intelligence information first and foremost. Hence, the main technique to use diesel-electric submarines in combat action is known as "veil" when submarines are deployed in a line perpendicular to the probable movement of the target, at specific distances from each other. The entire group of submarines receives commands from an external command post, which creates extra telltale factors and reduces the stability of underwater combat groups.

It has long been a dream for many navy engineers to create a submarine with a fundamentally new power plant that would combine the advantages of nuclear and diesel-electric submarines: power and stealth, longer autonomous diving and low noisiness.

Russian submarines of Project 677 Lada with air-independent power plant will mark a serious breakthrough in this direction. The new submarine will take the Russian undersea fleet to new frontiers.

The Lada sub is not large - their displacement is almost twice as less as that of the famous Varshavyanka. Yet, its arms complex is unusually large. In addition to traditional mine and torpedo weapons (six 533-mm torpedo tubes, 18 torpedoes or mines), Project 667 is the world's first non-nuclear submarine, equipped with specialized launchers for cruise missiles (ten vertical launchers in the middle part of the body). These cruise missiles can be both tactical and long-range missiles designed to destroy strategic targets deep into enemy territory.

The most important feature of the new Russian submarine is the new air-independent propulsion plant. Without going into details, we would only say that with these power plants a Lada submarine will be submerged for up to 25 days - that is almost ten times longer than of its famous predecessor - Project 636.3 Varshavyanka. To crown it all, the Lada submarine will be even less noisy than the famous "black hole" Varshavyanka, which the Americans dubbed so because it is almost impossible to detect it.

NATO countries, particularly Germany and Sweden, have long been trying to equip their submarines with such power plants. German shipbuilders have tried to build small submarines equipped with a hybrid power plant since late 1990s. It includes surface speed diesel engine for recharging batteries, silver-zinc batteries for energy-conserving underwater navigation and air-independent propulsion plant  for energy-saving underwater navigation on the base of fuel cells that include tanks with cryogenic oxygen and metal hydride containers (special metal alloy with hydrogen).

The Germans succeeded in increasing the duration of underwater navigation of their submarines to 20 days. Presently, German submarines with air-independent propulsion plants of various modifications are in navy service in Germany, Italy, Portugal, Turkey, Israel, Korea and several other countries.

Swedish group Kockums Submarin Systems began the construction of Gotland class submarines with air-independent propulsion power plants based on the so-called "Stirling engine". Swedish subs can also stay under water for up to 20 days without recharging batteries. Stirling engine submarines currently serve not only in Scandinavia, but also in Australia, Japan, Singapore and Thailand.

However, both German and Swedish submarines pale in comparison with Russian Lada submarines. Project 667 Lada is qualitatively a new generation of submarines.

Rubin Design Bureau - the main developer of submarines in Russia - designed the Lada to deliver salvo torpedo-missile strikes on marine and stationary ground targets both from torpedo tubes and specialized vertical missile silos. Due to the unique sonar system, the Russian sub has a significantly increased distance for target detection. It can submerge at the depth of 300 meters, develop underwater speed of up to 21 knots and submerged endurance of 45 days. To reduce noisiness, vibration isolators are used along with all-mode propulsion motor with permanent magnets. The hull of the submarine is covered with "Molniya" ("Lightning") material that absorbs sonar signals.

The Russian air-independent propulsion power plant will be a lot more energy conserving than its German analogue with up to 25 days of continuing underwater navigation. At the same time, Lada will be substantially less expensive than the German Project 212\214 sub.

Before 2020, the Russian Navy expects to receive 14 of new 4th generation submarines.

"Four to six of such submarines can completely block closed or semi-closed water area as of the Black, Baltic and Caspian Seas. Their advantages are obvious to any naval specialist," Vice-Admiral Viktor Patrushev said in an interview with RIA Novosti in late 2010.

The deployment of two or three groups of Lada submarines can fundamentally change the balance of power not only in the Baltic, Caspian and Black seas, but also in the North, in the Mediterranean water areas and in the Atlantic and the Indian Ocean. In the North, in the Barents Sea, Lada will cover the routes of deployment of Russian strategic missile submarines from any activity that US and NATO forces may show. This will significantly improve the combat stability of the naval component of Russian strategic nuclear forces.

Presently, Russian missile cruisers are mainly on duty under the Arctic ice, where they are virtually inaccessible to enemy action. The Americans can detect, track and attack our submarine only at the stage of its transition to the ​​combat patrol area. The Lada sub is ideally suited to counter US submarines as they hear them at much greater distances.

With regard to the Mediterranean, the Atlantic and the Indian Ocean, the presence of Lada-type submarines in those waters nullifies the American naval power that is primarily based on aircraft carrier strike groups.