Two people were killed in the fire that broke out on board the St.Daniil Moskovsky nuclear submarine at night. The fire has been extinguished, the nuclear reactor has been shut down, and the submarine is being towed on the water surface, a message from the press service of the Russian Northern Navy said. 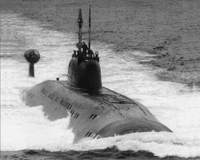 “The fire on board the nuclear cruiser was extinguished at about midnight, Moscow time. The fire broke out in the electromechanical compartment of the submarine. The alarm system of the submarine’s nuclear equipment was activated automatically. There is no nuclear contamination threat whatsoever,” an official of the Northern Navy told Interfax.

Two crewmembers were killed in the fire: a warrant officer and a contractual sailor. The two men died over carbon monoxide poisoning. There were no weapons in the compartment where the fire occurred.

At present moment the submarine is being towed to the Vedayevo base. The Office of the Military Prosecutor of the Northern Navy instituted criminal proceedings on Article 352 of the Russian Penal Code – Violation of Navigation Rules.

The crew of the nuclear submarine consists of 102 people. The sub carries two nuclear reactors. It is outfitted with a complex of cruise missiles, mines and torpedoes.