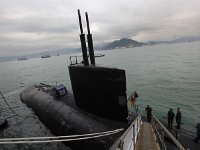 This tragedy, in my opinion, to some extent was the result of the triumph of the Communist Party (CPSU). Many researchers are inclined to think that time is to blame in the tragedy of the K-429, the time when the threat of being excluded from the CPSU was the worst that could happen to any career.

Even senior submarine officers had no access to the information about the accident. Although they believe that if the details of the tragedy were duly reported to the personnel of the Navy allowing for a full analysis of the situation, it may have prevented the death of K-219 in 1986, "Komsomolets" in 1989, and even "Kursk" in 2000. Of course, it is impossible to compare the technical aspects of these disasters because of different equipment, different depths and different people. However, this story should be known, at least for the sake of a lesson.

In our time, a lot was written about this tragedy, including books by Admiral Nikolai Mormul "Underwater Disaster" and "The Case of Suvorov, K-429," and articles on the Internet. According to nearly all authors, this tragedy has not yet been given a fair estimate.

In the spring of 1983, nuclear submarine K-429 Project 670 returned from its autonomous navigation. Most of the crew went home, and the boat was sent for the planned maintenance repair. The crew of the Captain of the first rank Nikolai Suvorov was to meet the boat after the repairs to go to sea in the fall for training and testing of the torpedo firing responses.

Unexpectedly, the Command decided to conduct the training in the summer instead of the fall, and take the boat that did not undergo due repair to the sea for combat exercises. This was done to meet the plan of combat training.

One thing was not taken into account - the boat was still in the mode of transfer from one crew to another. The regular crew had to be assembled from different boats. The threats of admirals about taking away party memberships had their effect, and on June 23rd K-429 submarine had a crew from five different boats. The crew was finalized only three hours before going to sea, which is a violation of regulations. When 30 percent of the crew is replaced, the boat is considered non-operational. This is understandable, because sometimes under water it all depends on collective effort, the unity of the crew, the feeling of the other person's elbow. In this case, there was no three-day basic training; there was not even time to check the systems and mechanisms. But the admirals were not concerned. The submarine with a disjointed crew was sent to sea, relying on good luck. The luck was not there.

That day the division chief of staff, Captain of the first rank Alexei Gusev and the newly appointed commander, Captain of the first rank Nikolai Suvorov protested against going into the sea on unprepared boats. After the Admiral's threat to take away their party membership, the two wrote a report on the complete unpreparedness of the boat to sail. As it turned out, the reports were simply put aside. The Charter states that the orders, no matter how crazy they may be, must be followed. K-429 went to sea with a composite crew. They were 120 people on board instead of the usual 87. The people were herded just in case someone would have to be replaced at sea.

On June 24th, 1983 the boat set out of the Krasheninnikov Bay. In the Sarannaya Bay where the depth is about 50 meters, a decision was made to "weigh" the boat in the sea water to determine whether it could dive. The command "to dive" was not implemented in the compartments, vent flappers were not closed, and the ship's ventilation system was not blocked. The boat sank and quickly fell to the depth of about 35 meters. In the fourth compartment water gushed out. The central post Echo devices displayed zero mark, as though the boat has not sank. The devices were disabled at the factory because the boat was in repair. Reports on the flow of water through the ventilation system started coming from the compartments.

The submarine, taking 420 cubes of ice water in her gut, lay on the bottom. Only then the emergency alarm was activated. Commander Suvorov gave the order to blow the main ballast tanks. The operator, who was not familiar with the devices on the remote control, instead of closing ventilation valves, shut down Kingston valves. Instead of displacing the water from the tank, the air went straight out, and the body of the boat gradually filled with water. Soon all electrical equipment broke down, and the control room was disconnected and partially flooded. The crew managed to close the ventilation valves only next night. The boat was lying on the bottom at the depth of 45 meters. If the "weigh-in" was done not in the Sarannaya Bay but a little further out in the sea, where depths reach a mile, the boat would have simply been crushed.

The crew was not able to release the emergency buoy meant to give an acoustic and radio signals of distress. To prevent separation and loss, the buoy was firmly welded to the hull. This practice was widespread, at least, at the time. A loss of a buoy was a straight path to losing the party membership. Later it turned out that the submarine escape trunk designed for an emergency evacuation of the crew was also welded to the boat. At this point, the entire team of the fourth compartment (14 divers) was already dead.

Neither the headquarters of the fleet, nor the command knew of the emergency situation on K-429. Everyone on the shore was convinced that the submarine carried out combat exercises. When it became clear that help would not arrive, Captain Gusev made an executive decision to send two divers to the surface through the torpedo devices of the first compartment. They came to the surface using IDA-59 - rescue breathing apparatus and swam to the shore.

When a few hours later they were noticed from a passing border ship, they were mistaken for the enemy. Only after an hour of interrogation, the commander of the border ship reported to the headquarters of submariners asking whether they were missing a boat. This is how the command learned of the death of K-429.

Fortunately, of the 120 people on board only 16 were killed. The debate about who exactly was to blame for this tragedy is ongoing to this day. In 1983, the court simply appointed those guilty, namely, the commander Nikolai Suvorov and the crew mechanic Boris Likhovozov. Suvorov was sentenced to 10 years, Likhovozov - eight. They were taken into custody right in the barracks, where the court was held.

Chief of Staff of the flotilla Oleg Yerofeev later became the commander of the Northern Fleet. Under his leadership the nuclear submarine "Komsomolets" perished in 1989. How fair was the trial? Who else should have gone to prison? The controversy still continues to this day. Why was the exercise not delayed? There is only one answer to all questions - party membership.

Some officials in uniform tried to declare the survivors who escaped from the sunken submarine criminals. Particularly ardent was a captain of the first rank, secretary of the party committee, known for the fact that he has never set foot on the deck of a battleship.

The commander became the scapegoat. Suvorov spent three years in a penal colony in the Novgorod region. He was released under an amnesty in September of 1987 and passed away on September 26th, 1998 in St. Petersburg.