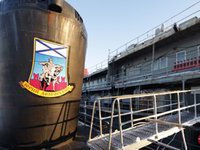 A statue in the Russian capital shows him sitting on his battle-horse, clad in armour, stretching his right arm far away from his body, to point at the distance, as if he wanted to say, "All of this land is mine, all mine."

Just like the long-armed prince laid the first stone of Moscow, so the nuclear-powered ballistic submarine, Yury Dolgoruky, was the first submarine of the Borei class for the Russian Navy, commissioned on the 10th of January 2013. It was designed by the Rubin Marine Engineering Bureau and built at the Sevmash shipyard in Severodvinsk.

The Russian President promised that "Vessels of this class will become a critical element of the naval component of Russia's strategic forces, a guarantee of global balance, the security of Russia and its allies."

President Vladimir Putin pointed out that "The modernization of the fleet is one of our top priorities as part of strengthening the Armed Forces. Over four trillion roubles have been allocated for the State Armament Programme until 2020."

Russian armament is going to be produced in Russia exclusively, except for some rare parts that need to be bought abroad. The President explained, "Sevmash will be the key company executing the orders. This legendary shipyard has already built over 120 nuclear-powered submarines for the Russian Navy."

At the end of his address, the Russian President thanked all the people involved and wished the crew success, "I would like to thank all those, who took part in the creation of the Yury Dolgoruky submarine, for their hard work. I wish the submarine's crew every success in their service for the benefit of Russia."

The Navy's Commander, Admiral Viktor Chirkov, explained the new submarine's assigned tasks to President Putin, "The Yury Dolgoruky will begin performing L1 tasks, followed by L2 tasks. We have allotted 60 days each for L1 and L2 tasks. After that, the nuclear-powered submarine will conduct deep-sea testing at a depth of 600 metres and torpedo firing from a great depth."

The Navy Commander also informed President Putin about the crew: "That will be followed by personnel training, using L3 tasks with the use of weapons. The Yury Dolgoruky will join the constant combat readiness forces. We expect that by the end of 2013, two crews will be fully trained. In January 2014, the submarine will become operational", he said.

Admiral Viktor Viktorovich Chirkov, born on the 8th of September 1959 in Alma-Ata, Kazakhstan, has been the Russian Navy's Commander-in-Chief since May 2012. He entered the Navy in 1979. Three years later, he graduated from the S.O. Makarov Higher Naval School in Vladivostok.

In 2000, he completed the Military Academy of the General Staff for the Armed Forces. In 2007, he was promoted to First Deputy Commander of the Baltic Fleet and became Fleet Commander in 2009.

Admiral Viktor Chirkov gave further details about the weapons on board of the submarine, "The weapons of the Yury Dolgoruky include 16 ballistic missiles, capable of striking targets at long range in accordance with design specifications. We also devoted a great deal of attention to torpedo armaments and the cruiser's ability of using long-range cruise missiles. Thus, the characteristics stipulated by the design bureau have been fulfilled."

The Russian Navy is witnessing a Renaissance, after years of neglect, when the former Soviet Union dissolved in 1991. "A ruler that has but an army, has one hand, but he who has a navy, has both hands," Tsar Peter the Great knew.

The origins of the Russian Navy date back as early as the 4th century, when East Slavs built flotillas of small, seaworthy ships, to fight against the Byzantine Empire. In the 9th century, the Kievan Rus owned flotillas comprising hundreds of ships of the types Ladya, Ushkuy, Kochi and Nosad.

In the 16th and 17th centuries, the Cossacks used sailboats and rowboats in their campaigns against the Ottoman Empire. Their ships, called strugs, transported 80 men each, and one flotilla consisted of 80 boats respectively.

In 1826, the Russians built their first armed steamboat, Izhora. About half a century later, in 1877, Admiral Stepan Makarov designed the first Russian ice-breaker, Yermak, which was tested successfully in two Arctic expeditions, in 1899 and 1901.

During Soviet times, the Navy grew fast. It possessed large guided missile cruisers of the Kirov class and the Slava class. In the 1980s, the first aircraft carrier, Tbilisi, was commissioned. Later its name was changed to Admiral Kuznetov.

Today, the Russian Navy consists of the Northern Fleet, Baltic Fleet, Black Sea Fleet, Pacific Fleet and the Caspian Flotilla, furthermore the Naval Aviation and the Coastal Troops. The Russian Navy celebrates two special days each year, Submarines' Day on the 19th of March and Navy Day on the last Sunday in July.

In the 21st century, the Russian Navy is beginning to flex its muscles again, as plans were published that it intends to be present in all of the oceans around the entire globe on a permanent basis. Besides keeping the naval base in Tartous, Syria, the Russian Navy has the intention of reviving its former Soviet naval bases in Cuba and Vietnam.

President Vladimir Putin was very happy about the Yury Dolgoruky's new commission, "This is a great event for the Navy. It confirms our commitment to modernize the Navy. The submarine Yury Dolgoruky is a serious, powerful weapon that will guarantee the security of our country and enhance our defence capability."

In the spirit of Tsar Peter the Great, the Russian Government now has two hands, not just one, to grasp the good fortune which is waiting in the future.