The first and one of the major accidents at the Navy of the USSR took place 45 years ago. On September 8, 1967, an accident on board the first Soviet nuclear submarine K-3 Leninsky Komsomol killed 39 people. The causes of the accident had been classified for 20 years. It is only now, in September 2012, when a special commission is going to finish the investigation. 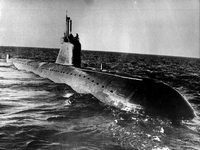 Before we go directly to the accident, let us remember the heroic and long-suffering history of the submarine. Leninsky Komsomol, originally K-3, was the very first Soviet (and the third in the world) nuclear submarine, the head one of the series.

It was the only sub of Project 627. All subsequent subs in the series were based on the finalized project 627A. The sub inherited the honorary title Leninsky Komsomol from the diesel submarine M-106 of the Northern Fleet, which was destroyed in one of the combat missions in 1943. During the last years of service, the K-3 was reclassified from cruise to large submarine.

The construction of the sub was started on September 24, 1955 at the plant in Severodvinsk (nowadays Sevmash Plant), serial number 254. In August of 1955, captain of the first rank Leonid Osipenko was appointed the commander of the sub.

In 1961, the submarine was on combat duty in the Atlantic Ocean. In July 1962, for the first time in the history of the Soviet Navy, it went on a long mission under the ice of the Arctic Ocean, in which it passed the North Pole twice.

Under the command of Lev Zhiltsov, on July 17, 1962, the K-3 surfaced near the North Pole for the first time in the history of the Soviet submarine navy. The crew hoisted the flag of the USSR somewhere near the pole.

Nikita Khrushchev himself and Defense Minister Rodion Malinovsky came to the pier to celebrate the return of the submarine. The administration of the legendary, first-ever mission to the Pole later received the title of the Hero of the Soviet Union. The entire staff of the sub were decorated with orders and medals.

But there were some difficulties too. Since the boat was entirely new, and because it was designed and built in a hurry, it constantly required repairs and technical servicing. The works were hidden under the words "pilot operation."

In the first years of service and during the mission to the North Pole, the maintenance of the submarine, which was often staying in a state of emergency, was provided by a very skilled team of people, who could perform complex repairs themselves.

The never-ending technical works on board the sub and the appearance of new welded seams led to the increased exposure of the crew to radiation.

On September 8, 1967, a fire broke out in the first and second compartments during a combat mission in the Norwegian Sea. Thirty-nine people were killed. The sub returned to the base, though. The probable cause of the accident was the unauthorized replacement of a gasket in the fitting of the hydraulic machine. There was a leak, and the leaked hydraulic fluid, which was not collected in full, caught fire...

BaltInfo agency quoted then-deputy commander of the sub, Alexander Leskov. According to him, the accident was actually based on the fact that after the mission to the North Pole in 1962, the crew of the Leninsky Komsomol was executing presumably representative functions at countless Komsomol and party conventions. The submarine did not participate in combat missions for three years, and the level of training of the crew considerably decreased. The crew of the sub became exemplary.

The circumstances of the fire and the actions of the crew at the time of the accident were kept secret for a long time. The official version of events of September 8 did not correspond to reality. The survivors were obliged not to disclose any details for several decades.

At the end of September 2012, a commission of experts is to dot all i's in the case of the tragic death of submarines of the first Soviet nuclear sub K-3 Leninsky Komsomol.

"A non-standard gasket from...a beer bottle was installed in the ballast tank. Naturally it was displaced, the hydraulic fluid leaked under the pressure of 100 atmospheres and got sprayed onto the lamp, which had a broken protective cap. Inflammation occurred immediately," former assistant commander of the K-3 said.

"By falsifying documents, investigation allegedly found that a submariner climbed into one of the compartments and lit a cigarette, but it was not true!" Leskov told a news conference. Only in 50 years it became known that it was a man-made, not a human factor that caused the accident.

According to Leskov, on September 30, 2012, a meeting of the expert council at the Commander-in-Chief of the Navy will take place to put an end to this story. The killed 39 sailors will be submitted to state awards.