Boris Nemtsov's murder: Why so many versions? 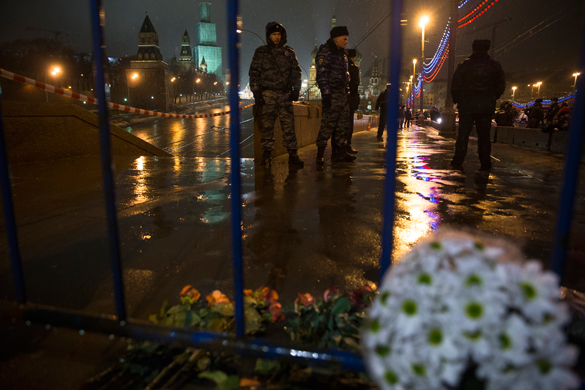 Yet, it is absolutely clear that the demonstrative murder of Boris Nemtsov on February 27 at night, right in front of the Kremlin, just one day before a mass opposition rally was a challenge to the Russian authorities.

"No matter what versions of this murder one may discuss, it must be borne in mind that enemies of our country, all sorts of scoundrels, will use it to destabilize the situation in Russia," Communist Party leader Gennady Zyuganov said.

Without a doubt, there will be speculation about the death of Boris Nemtsov. The process has already started. Some recall Nemtsov's interview to the Sobesednik newspaper from10 February, in which he said that his 87-year-old mother and himself feared that Putin might kill him "because of his views." Can one do without speculations on the subject? He said that he had a premonition ...

Another word combination has become widely used in this connection too. Boris Nemtsov is often referred to as the "sacred sacrifice." These words were used even  in one of the statements from representatives of the Investigative Committee: "At the moment, investigation is considering several versions of the murder: a provocation to destabilize the political situation in the country, and Boris Nemtsov could become a kind of sacred sacrifice for those, who do not shun any means to achieve their political goals."

Abundant versions always complicate a criminal case. Immediately after the murder, it was said that Nemtsov could be killed out of jealousy. Minuted before his death, Boris Nemtsov was taking a walk with 23-year-old Ukrainian model Anna Duritskaya. Personal life of any person, of course, is private. However, it was no secret that Boris Nemtsov was not a faithful man. Who can say that he had no conflicts in this regard?

This version is not the only one. "A number of signs suggest that whoever committed the crime was not a professional. They could be ultra-right radicals, who consider both the current government and political opposition their opponents," a source at law enforcement agencies said.

Investigators also noted that the killers probably were not professionals. This is evidenced at least y the fact that the casings from bullets found at the crime scene had been made at different arms factories.

One should keep in mind the conflicts that Boris Nemtsov had in Yaroslavl. During the last two years, he served a member of the regional parliament, painstakingly creating an image of a fighter against corruption. Several high-ranking officials in the local health care system lost their posts because of Nemtsov, whom he accused of fraud in procurement for medical institutions.

Another fact of Nemtsov's parliamentary activities was related to the dispute about the taxes that the Yaroslavl refinery should transfer to the regional budget. The MP insisted the taxes should be increased. He was going to address to the President of Russia with this question, but was unable to win the support of colleagues in the regional Duma.

The Izvestia newspaper mentions another version - the Ukrainian one. The publication noted that Nemtsov had been a frequent guest in Ukraine lately, where he met with local politicians and oligarchs.

"They could give him the funds to destabilize the situation in Russia. For that money, Ukrainian oligarchs might well expect Nemtsov should split the Russian society," - a source told the newspaper. "However, the split did not occur, and the society consolidated contrary to expectations. Realizing that they will not achieve the result, Nemtsov's sponsors could remove the policy-maker for failing to do the job," he said.

The head of the Chechen Republic Ramzan Kadyrov accused Western intelligence agencies of the tragedy in Moscow. "Only the forces interested in fomenting tensions could take such a treacherous step. The organizers of the murder hoped that the whole world would accuse the Russian leadership of Nemtsov's murder. There is no doubt that the murder Nemtsov was organized by Western intelligence services that are still seeking for ways to trigger an internal conflict in Russia," Kadyrov wrote on a social network.

He suggested that Ukrainian special services cold be involved in the murder. In any case, Kadyrov believes, the crime must be disclosed, as Boris Nemtsov was, first and foremost, a citizen of Russia.

Noteworthy, former US Ambassador to Russia Michael McFaul tweeted that discussing the possible involvement of the United States in the death of Boris Nemtsov was "disgusting."

For the time being, Western politicians have unanimously condemned the murder of the Russian policy-maker. Noteworthy, Boris Nemtsov was a frequent visitor to the United States, where he would often meet with Senator John McCain, who, while presenting condolences to Nemtsov's family, recalled that he had warned Nemtsov of the danger.

As for the crime itself, why the date and the location? Is this a coincidence? Was it a coincidence, when journalist Anna Politkovskaya was killed on Vladimir Putin's birthday? Or it was a very clear message to the authorities?

Was it a coincidence, when the Malaysian Boeing crashed near Donetsk on the eve of important negotiations to resolve the conflict in the Donbass? Or was it done to disrupt them? Will Nemtsov's murder become a prologue to the Moscow Maidan?