Kadyrov and Medvedev post selfie with world's most influential man

Chechen President Ramzan Kadyrov posted an interesting photo on his Instagram - a selfie with Russian Prime Minister Dmitry Medvedev. The two policy-makers took a picture of themselves against the background of the portrait of Russian President Vladimir Putin. 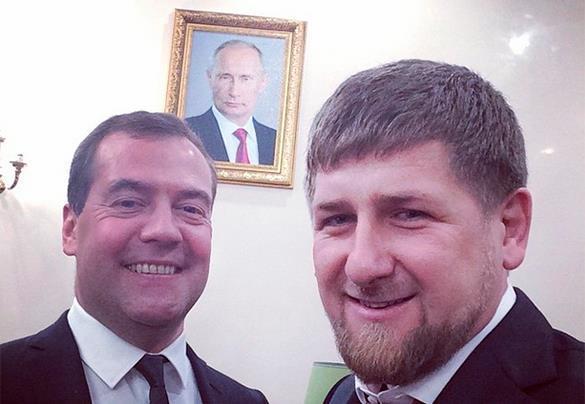 "We with Mr. Medvedev, made a ​​selfie against the background of the most influential man in the world, the national leader of Russia, Vladimir Putin!" Kadyrov wrote in the photo caption.

The head of Chechnya thanked Medvedev for assistance and support that Russia gives to regions and republics.

"This is very important when the Russian economy faces new challenges dictated by the situation in the world," he said.

Recently, it has been reported that Forbes magazine named Russian President Putin the world's most influential man for the second consecutive year. USA's Barack Obama and China's Xi Jinping follow Putin on the list.

"We congratulate our national leader Vladimir Putin! Barack Obama has something to think about. Instead of imposing sanctions on my horse, he should deal with affairs of state importance," Chechen President Ramzan Kadyrov wrote.