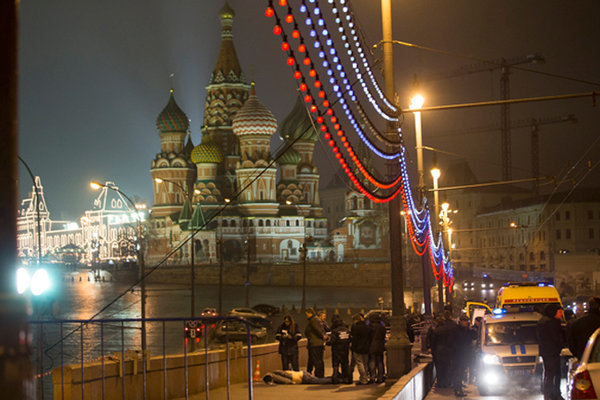 Tass said he was "shot dead (by) four shots from a handgun from a car passing by him..."

Along with Aleksey Navalny, Garry Kasparov, Vladimir Ryzhkov, and other Putin opponents, he had close Western ties.

He got State Department funding through the National Endowment for Democracy (NED). It wages war on democracy worldwide.

It advances US interests. Its board of directors includes a rogue's gallery of neocon extremists.

In 2009, Nemtsov and Kasparov met personally with Obama. They discussed anti-Putin tactics - regime change by any other name.

I'll now be a Nemtsov memorial rally - turning an anti-Putin/pro-Western opportunist/convenient stooge into an unjustifiable martyr.

Kremlin spokesman Dmitry Peskov said "Putin has stressed that this brutal murder has all (the) signs of a contract murder and is extremely provocative."

"The president has expressed his deep condolences to the family of tragically deceased Nemtsov."

He ludicrously called him "a tireless advocate for his country, seeking for his fellow Russian citizens the rights to which all people are entitled."

"I admired Nemtsov's courageous dedication to the struggle against corruption in Russia and appreciated his willingness to share his candid views with me when we met in Moscow in 2009."

"(T)he Russian people...have lost one of the most dedicated and eloquent defenders of their rights."

John Kerry made similar duplicitous comments. Mikhail Gorbachev called his killing "an attempt to complicate the situation in the country, even to destabilize it by ratcheting up tensions between the government and the opposition."

Nemtsov was a Western financed self-serving opportunist. His killing has all the earmarks of a US-staged false flag. Cui bono remains most important.

Clearly Putin had nothing to gain. Rogue US elements have lots to benefit from trying to destabilize Russia.

If Putin wanted Nemtsov dead, it's inconceivable he'd order a Mafia-style contract killing. An "unfortunate" plane or car crash would have been more likely.

Gunning him down in central Moscow automatically rules out Kremlin involvement.

His demise has all the earmarks of a CIA-staged false flag. Expect no evidence whatever surfacing suggesting Putin's involvement.

Nemtsov's martyrdom is much more valuable to Washington than using him alive as an impotent opposition figure.

Despite challenging economic conditions, Putin's approval rating exceeds 85%. Nemtsov's party has less than 5%. He was no popular favorite. Most Russians disliked him.

Expect his hyped martyrdom to be fully exploited in the West. Does Washington plan more political assassinations to heighten the Nemtsov effect?

Expect Sunday's march to be nothing more than another US failed attempt to enlist anti-Putin support.

Russians aren't stupid. They know how Washington operates. How it vilifies their government. How neocon lunatics in charge are capable of anything.

Obama wants war, not peace. He wants destabilizing regime change in Russia - perhaps by nuclear war if other methods fail.

Killing Nemtsov changes nothing. Expect Western anti-Putin propaganda to fall flat after a few days of suggesting his involvement.

The New York Times practically accused him of murder calling Nemtsov's killing "the highest-profile assassination in Russia during (his) tenure."

His death occurred "just days before he was to lead (an anti-Putin) rally to protest the war in Ukraine."

The Times absurdly claimed "doors are now closing on the vision of a pluralistic political system of the type (Nemtsov) said he wanted for Russia."

It quoted discredited (on corruption charges) Putin opposition figure Gennady Gudkov saying "(t)hey have started to kill 'enemies of the people.' Mr. Nemtsov is dead. Who is next?"

The Times called him a "dashing, handsome young politician..often touted as an heir apparent to (Boris) Yeltsin."

They flat-out lied saying he "was a courageous Russian politician who never gave up on the dream that the country could make the transition from dictatorship to liberal democracy."

They tried turning a nobody into a political icon. Ludicrously claiming he "be(came) one of the most enduring political figures of the post-Soviet era."

Disgracefully saying "he was by no means the first Putin opponent to be murdered in brazen fashion." Practically accusing Putin of ordering his killing.

Claiming he's "unwilling to tolerate opposition of any kind." Ignoring his overwhelming popularity. His opposition does a good job of rendering itself irrelevant.

They absurdly claimed "he might have steered Russia toward a decent future had he been given a chance."

"Instead, he was fated to become a courageous voice for democracy and human rights who risked his life to alert an indifferent West to the dangers of doing business with the man in the Kremlin."

Journal and like-minded editorials and commentaries repeated one Big Lie after another. Irresponsible Putin bashing substitutes for honest reporting and analysis.

It bears repeating. Russians are too smart to fall for thinly veiled US schemes.

Their overwhelming support for Putin shows flat rejection of what Washington neocons have in mind for their country.