Russia and Turkey determined to supplement each other

Russia and Turkey may switch to payments in national currencies, and not only in the gas industry. Representatives of Turkish mechanical engineering, who have recently visited Moscow, said they would be willing to deliver machinery tools to Russia. Has Turkey established itself as a good partner for Russia? 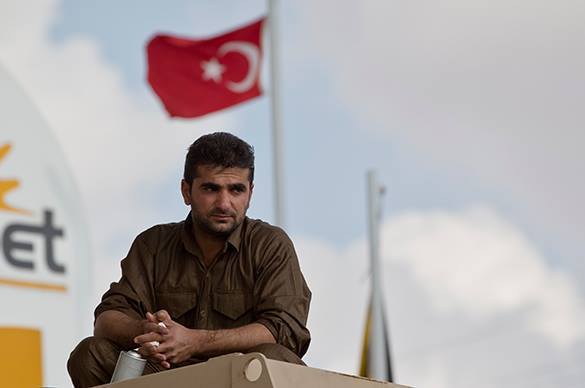 Russia and Turkey to cooperate contrary to NATO's will

Every year, Russia spends $27 billion to buy machinery and equipment from abroad. Turkish machine builders stated that they were ready to expand cooperation with Russia. In general, Turkey has long been one of the best economic partners for Russia. Russia and Turkey have large-scale projects in the field of nuclear power. Turkish construction companies are traditionally active on the Russian market, both in Moscow and in the regions.

At the same time, business structures of our southern neighbor raise the question of Turkey's accession to the economic Eurasian Union. This brings up an aspect, which somehow fades away into the background in the media. It goes about Turkey's cooperation with NATO. As it turns out, these are absolutely different things: business does not mix with military affairs.

"You'll laugh, but constituent documents of the North Atlantic Alliance do not limit economic cooperation of its members and allies with the countries, against which individual, personalized or sectoral sanctions have been introduced, - member of the International Bar Association, consultant of the Public Chamber of the Russian Federation Igor Schmidt said in an interview with Pravda.Ru. - Legal documents of the alliance were formed a long time ago, when it was impossible to predict the situation that has developed in the world today. In other words, no one can forbid  Turkey to cooperate with Russia in the economic sphere. NATO's regulations are rarely changed, and this is a long and complex process, which Turkey uses to its advantage."

"With regard to Turkey's reliability as a partner, I'd like to note that this country has never joined the sanctions that several countries of the West imposed on Russia. Quite on the contrary, Turkey suggested expanding cooperation with Russia, including in the gas and energy sector, and in the military sphere, - chief editor of Arsenal of the Fatherland Journal, member of the advisory board of the Military-Industrial Commission of the Russian Federation, Viktor Murakhovski, said in an interview with Pravda.Ru. - Indeed, we want to work with Turkey regarding the supplies of various types of industrial equipment. Turkey has already proven itself as a reliable partner."

Russia has not lost business appeal under sanctions

Nevertheless, the expert believes that Russia should not be too much attached to only China and Turkey. There are other powerful manufacturers, such as South Korea, Taiwan, Brazil. However, the expert admitted, Turkey's recent positions on the market of engineering equipment have been impressive during the recent decades.

"I want to say that all the talk in the West, those remarks from Obama about the Russian economy being in tatters and isolation show that all this is not true to fact, - the chief of the Sector for Regional Security Issues at the Centre for Defence Studies at RISS, Sergey Yermakov, said in an interview with Pravda.Ru. - Today, the businessmen and countries that support their national businessmen and manufacturers have a much more flexible and broader outlook. Turkey is a bright example. In this sense, Turkey is a great partner for Russia."

Turkey has its own economic interests that are above certain political circumstances. Despite the fact that Turkey is a NATO member and is traditionally referred to as a member of the Western bloc, it plays its own role, on the basis of its national interests, he added. "This cooperation is beneficial for Turkey, we have very good prospects here," said Sergey Yermakov.

Against the backdrop of sanctions, Turkey has obtained a chance not only to preserve the flow of Russian tourists, but also to develop the field of mechanical engineering.

Turkish businessmen, who frequently visit Russia, say that Russia can purchase any equipment for any type of production in Turkey. These friendly relations have their brief, yet positive history.

Thus, the activities of the Association of Exporters of Machinery and Equipment, which was established in Turkey in 2002, was originally aimed at close cooperation with the Ministry of Economy of the Russian Federation. This is the only Turkish association of exporters of machine building products that consists of more than eight thousand Turkish exporters.

In 2013, Turkey's exports of machinery totaled $5.5 billion. The same year, Germany purchased the Turkish equipment worth $2.2 billion dollars. In other words, Turkey exports 16.7 percent of machinery and equipment products to  Germany. Needless to say that Germany is an internationally recognized leader in the field of mechanical engineering in the European Union.

Today, Turkey supplies machines and equipment to more than 200 countries. Turkey has established itself as a manufacturer of high-quality equipment in the world market. Yet, 60 percent of Turkish machine exports fall for the EU and USA. There is a long way to go as far as cooperation with Russia is concerned.

The Turks promise flexibility in pricing policy, especially against the backdrop of the current ruble rate. Moreover, Turkish companies that now work in Russia already cut their prices for Russian customers.

Moreover, it was reported that the central banks of Russia and Turkey work to switch to settlements in national currencies. Turkey's leading banks have suffered from Western sanctions against Russia. Thus, the US Treasury Department introduced restrictions on the Turkish DenizBank in September of 2014 in connection with the same restrictions that were imposed on Russia's Sberbank.  The two banks are linked financially and organizationally. The restrictions were lifted in October of the same year.

"Economic relations between Russia and Turkey have been developing for the past 20 years. Today, they are on the rise, - a member of the Public Chamber of the Russian Federation, Director of the Institute of Political Studies, Sergei Markov, said at a press conference devoted for the development of the Russian-Turkish relations. - It is important that the structures of Russian and Turkish economies are not competitive, but complementary. What is developed in Russia is not very well developed in Turkey and vice versa."