Turkey will not leave Russia alone 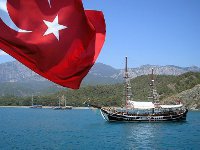 World politics have seen a lot of changes in the year 2014. One of the most significant developments was the Ukraine crisis and the subsequent EU-USA alliance against Russia. According to Putin, this is the result of a 25-year-old policy that seeks to isolate and push Russia towards East, and Putin believes that there would be another excuse for this behavior. Gorbachev also drew attention to the problem, stating that the world was on the brink of a new Cold War, and went on to say, "...We must make sure that we get the tensions that have arisen recently under control."[1] This policy of isolation following the Ukraine crisis turned into threats in the recent G20 Summit. For example, British Prime Minister David Cameron said that Russia was bullying smaller countries and that the sanctions against Russia would intensify. Obama claimed that the stance of Russia was almost as bad as the Ebola threat. Putin, on the other hand, having arrived with two warships, left early after having delivered his show of strength. However, neither the economic sanctions nor the suspension of Russia's membership of the G-8 brought about any changes in Russia's Ukraine policy. This unwavering stance of Putin's only increased his popularity in his country, which had already been around 80%.

Putin, since the first day he took over, made concrete steps for political, economic and military integration with the EU and the USA. He chose to side with the EU and the USA with respect to Afghanistan, Iran, Iraq, Palestine and Libya. The only thing Putin wanted in return was being able to maintain Russia's historical bonds with countries such as Ukraine, Crimea, Georgia, Belarus and Moldova, which he considers as Russia's gateway to Europe and of which Russia feels protective. He wanted respect from the Western world in this quest and to end their policy of isolating Russia. However, the Western world didn't pay any heed to such requests and started a race to take those countries under their own control and weaken Russia's influence over them. It is very clear that it is not only Russia who will be hurt by this isolation policy, but EU countries as well. The domination of Russia over energy corridors and its close relations with the Middle East, the Far East and Turkey make Russia one of the indispensable players in world politics. Turkey is the one country that is most aware of this fact, which makes Putin's trip to Turkey in December crucial for not only Turkey and Russia, but also for the USA, the EU and their neighbors.

Turkey is the only option available to Europe, if she doesn't want to need Russia with respect to multiple issues such as ending the recession, energy matters, trade movement and market integrity. Russia is also keenly aware of the importance of Turkey. Everyone can see that significant changes are about to take place in the global balance of power from Eastern Europe to the Middle East if the visit of Putin yields concrete results.

Even though the two countries have differing opinions on several matters like Syria, Crimea and Nagorno-Karabakh, the relationship between Turkey and Russia is shaped by the historical respect and friendly ties they have enjoyed so far: Both sides take the necessary precautions to prevent these disagreements from impairing their friendly ties. They both make efforts to act carefully so that communication channels remain open. This desire was also evident in Ankara's refusal to take part in the sanctions of the West against Russia. Turkish deputy Prime Minister Yalçın Akdoğan, in an interview with the Russian news agency also pointed out to this detail, "We have strong ties with Russia, ties coming from our history... We are cooperating in multiple areas. So we will not give up on that for the sake of others.."[2]

In the time leading up to Putin's visit, the commercial relations between the two countries have reached their peak. After Turkey's markets diminished following the ongoing Middle East problems, and Russia's following the Ukraine crisis, the two countries moved closer in their trade relations as well. After the sanctions against Russia, she stopped buying many commodities from the EU and turned to Turkey. The officials from both sides will discuss increasing the current trade volume of $35 billion to $100 billion by 2020. They have also decided to cooperate in the areas of energy, natural gas and nuclear energy. Russia is now the fourth biggest exporter of oil to Turkey and also meets 60% of its natural gas needs. The "Blue Stream" project that commenced in 2005 is one of the most significant projects between the two countries.

The most sensitive topic between Russia and Turkey is Crimea. Yet, both sides approach the issue with a calming styleThe fact that Putin declared Eid al-Fitr and Eid al-Adha official holidays for Crimea, allocated $250 million so that the Tatars can readjust, appointed young Tatar politician Ruslan Balbek as the Deputy Prime Minister of Crimea Autonomous Republic, the continuance of the construction of mosques in the region and the decision to grant titles which were denied by Ukraine for the past 18 years, is putting both the region and the Turkish government at ease.[3]

This approach of Russia to Crimea highlights the importance that Russia attaches to Turkey. Turkey doesn't refrain from taking concrete steps to maintain its strong ties with Russia, without being affected by other developments in global policy. The next step should be Turkey assuming the role of a broker between Russia and NATO. Russia, no doubt, can greatly help solve the problems in the Middle East, as long as it closely interacts with world countries and is embraced warmly by them.

The writer has authored more than 300 books translated into 73 languages on politics, religion and science.