Turkey wants to weaken Syria as much as possible 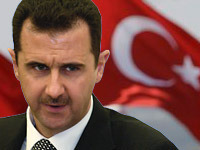 Turkish Foreign Minister Ahmet Davutoglu arrived in the capital of Syria, Damascus, on August 9. During his visit, the minister delivered an ultimatum to Syria. Turkey demanded Syria should immediately stop the military operations of government troops against civilians. Ankara also wants Syria to set the date for free and democratic elections to the parliament.

If Syria does not listen to Turkey's recommendations, Ankara will declare the Syrian president illegitimate, as it already happened to Libya's Gaddafi. We would like to remind here that there are nine Turkish combat jets operation against Libya now.

Thus, one may say that Turkey has made its last warning to Syria. US Secretary of State Hillary Clinton supported the hard mission of the Turkish foreign minister. However, Syrian officials previously said that if Davutoglu was going to use the tone of an ultimatum in his talks with the Syrian leadership, he would be given an appropriate response. Bashar Assad's spokespeople stated that Syria would not be trying to watch her language in this situation.

However, Syria showed a moderate reaction to the Turkish ultimatum. Syrian President Assad said during the talks with Davutoglu that Syria was willing and ready to restore peace in Syria. News agencies later reported, though, that Assad set out an intention to continue the fight against armed militants. Turkish mass media said that NATO would interfere in Syria's affairs if the country continued repressions against the population.

Needless to say that Bashar Assad's regime would collapse if he agreed to meet Turkey's requirements. A Turkish radio station said that Turkey did not pin much hopes on Davutoglu's mission. It was also said that Turkey was getting ready to launch a military operation in the north of Syria.

Turkey's Hurriyet publication said that defense officials of the country gathered for a special summit in Ankara the day before Davutoglu's departure to Damascus. The officials reportedly discussed all measures (economic, political and military ones) that could possibly be taken against Syria.

It is worthy of note that Turkey has done a lot to instigate the civil war in Syria. At least 40 percent of "peaceful demonstrators" who were disarmed by Syrian governmental troops, arrived in the country from Turkey. They received weapons from Turkey as well.

Officials of the Syrian Foreign Ministry stated in the spring of this year that Turkey was involved in the Syrian crisis seriously. It would be enough to say that the administration of Syrian rebels was formed in Istanbul with an assistance of Turkish PM Erdogan.

Bashar Assad is very well aware of the fact that the West has already buried him. There was a number of times when Western leaders said that Assad's regime was illegitimate.

Assad used his seven days to suppress the extremists. SANA, the official news agency of Syria, said that the government troops were leaving Hama having retrieved peace in the city. Human rights activists said that Assad's troops left many victims in the neighborhoods of the city.

Officials of the Turkish administration claim that Turkey is ready to defend human rights in Syria. This is a strange statement for Ankara to make taking into consideration the fact that the issue of national minorities in Turkey remains an intense one still.

Nevertheless, Turkey is ready to use the crisis in Syria to exacerbate the situation further. Judging upon Damascus's reaction to the statement from the UN Security Council from August 4, Syria is prepared to take up the glove from the West and Turkey. Syria will have to play by the rules of its enemies, who obtain a wonderful reason for interference. Assad does not have another choice. His regime will collapse under the pressure from "peaceful demonstrators armed with Kalashnikovs and M-16s.

The relations between Turkey and Syria have never been simple. Ankara cooperates with Tel Aviv at this point because Turkey has its interests in the region. Turkey does not have the goal to destroy Syria of course, but the country wants to weaken Damascus as much as possible. It seems that the West can approve Turkey's punitive operation.

Turkey controls the sources of major rivers in the region - Euphrates and Tigris - the water arteries for Syria and Iraq. Turkey began to develop the water resources of the region very actively at the end of the 1980s. Turkey approved an ambitious plan to increase the territory of irrigated lands by 1.7 million hectares. The country decided to build a cascade of water reservoirs on the two rivers. The decision triggered extremely serious conflicts for Turkey with Syria and Iraq.

Turkey has many other interests in the region, but the country wants to restore its influence in the region in the first place. Turkey has been demonstrating a stable economic growth recently. The country sees itself as a regional superpower that wants to return its Arab lands.