Turkey has resumed its attempts to join the EU. Prime Minister Erdogan has secured the support of the Italian Prime Minister, and President Gul - of the new president of France. German Foreign Minister approves accession to the EU, although a year ago, he thought otherwise. Today the European Union is very interested in strong Turkey, and Turkey aspires to become a leader of the weakening EU.

On May 9, Prime Minister Erdogan traveled to Rome, where in the framework of the intergovernmental summit between Turkey and Italy he agreed on the issue with Prime Minister Mario Monti. On May15, President Abdullah Gul used the NATO summit in Chicago to get the approval of the newly elected French President Francois Hollande, who promised to restart the relationship between the two countries and contribute to Turkey's accession to the EU. 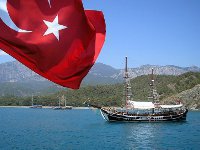 This is not a sensation. During his election campaign, Hollande said that he would restate the law on the Armenian Genocide to conform to the constitution. He emphasized that this law was not directed against Turkey or the Turkish community, but only provided for the equal treatment of all crimes of genocide recognized in France.

A day earlier, German Foreign Minister Guido Westerwelle at a conference in Istanbul in the presence of his colleague Ahmet Davutoglu said: "Europe must deal fairly with Turkey", as he believes that cooperation with this country would be very beneficial. Davutoglu said: "Since coming to power of Francois Hollande, we all hope that a new course in the relations between Turkey and the EU will gain momentum."

Why such a dramatic change in the attitudes of the European heavyweights? First, after the "Arab Spring" and the fall of stable "dictatorial" regimes the political situation in the region has changed. Moderate and predictable Turkey became a buffer between radical Islamists and Europe, as well as the guarantor of stability. Second, a die-hard "anti-Turkey" politician Nicolas Sarkozy left the political stage. He claimed that a Muslim country cannot be a member of the EU, and initiated a law criminalizing denial of the Armenian genocide. Third, Europeans weakened by the crises are hoping that a strong Turkish economy will help them to survive in difficult times.

Indeed, Turkey's economy is the fastest growing economy in the world after China. In less than a decade, its GDP grew three-fold and in terms of this indicator is now the 16th in the world. Its public debt to GDP ratio is only 48 percent. Turkey is already embroiled in the European integration process, and its trade with the EU countries amounts to 43 percent. In the economic competition with the U.S. the EU cannot miss such an ally as Turkey.

Turkey's aspiration to become an EU member has a 25-year history. In 2004, Turkey was declared a candidate for the EU membership. Since then, negotiations were hampered for many reasons, but the process was particularly complicated by the issue of Northern Cyprus, whose independence is not recognized by anyone but Turkey. However, today it is no longer a determining factor in gaining the EU membership. For example, Serbia that is a half-step from a positive decision is not going to recognize Kosovo's independence. Five existing EU members - Spain, Romania, Slovakia, Greece and Cyprus - have never recognized Kosovo's independence.

However, there is another side to this coin. In recent years Turkey has become a strong global player, and its ambitions have grown. The problems of Palestine, Iraq, Afghanistan, Somalia, Iran, Syria and the Caucasus are not even discussed without its participation. Erdogan is unpredictable and is able to skillfully maneuver, winning points. At first he refused to give the U.S. its territory to attack Iraq, and then agreed to host elements of the U.S. European missile defense. It made a series of strategic agreements with Syria, and then cancelled them, condemning al-Assad for the suppression of the opposition. Disagreeing with Syria, the Prime Minister, however, remained on excellent terms with its ally - Iran, supporting its nuclear program. Finally, he is trying, wherever possible, to block Israel, supposedly because Turkey has not received an official apology from Jerusalem for the murder of nine Turkish citizens during the storm of "Freedom Flotilla" in 2010.

Will Erdogan be able to act in a similar way after joining the EU? Of course not, but the times when it was more beneficial for Turkey to be a "perpetual candidate" than a full EU member have passed. The status of the candidate's image has led to the growth, investment, greater transparency in the tax system, and strengthening of the economy. Today, Turkey has great ambitions, and it wants to determine the actions of the European economy and politics. Why not? In the case of joining the EU it will be the second country of the European Parliament in terms of representation, as the number of seats is determined by the population size. In terms of the potential of the economy Turkey is now the fifth country in Europe.

The EU Enlargement commissioner Stefan Fule reported that he will be travelling to Ankara to announce the beginning of the negotiations with the Turkish government about eight "sensitive" issues.

In addition to the issues mentioned above, there is likely a possibility of fundamentalists coming to power in Turkey, concerns about uncontrolled Turkish immigration to Europe, approaching of the EU borders to unstable countries of Middle East and Caucasus, as well as inadequate legislation in terms of women and minorities' rights.

Possibly, all these issues will be resolved. The EU is interested in the strong Turkey and Turkey wants to become a leader in the weakening EU.